Movie Review: I Saw the Light 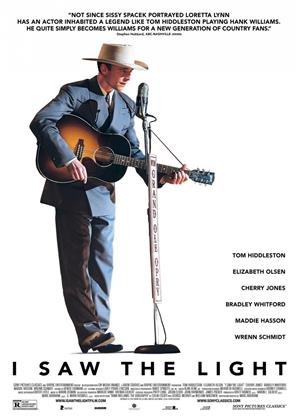 Flawed and fragmented, but also layered and hypnotically absorbing, I Saw the Light, a movie about a country singer-songwriter in the previous century, is one of the better pictures in this biographically-oriented genre. Like last year’s inspiring Steve Jobs, it is an essentialized dramatization of a man’s historic life, not a journalistic account. As such, it is an insightful and moving—also relevant—portrait of a musical genius.

Ranging over certain points in his short life—and I knew little about this artist going in—I Saw the Light starts in the heart of Dixie. The year is 1944 and the scrawny young singer, portrayed by Tom Hiddleston (Thor, War Horse) is getting married to an attractive woman named Audrey (Elizabeth Olsen). Writer and director Marc Abraham focuses on exploring, as against showcasing, the enigma of Hank Williams. So what you get is a darkened story driven by his choices, goals and songs, in simple terms with simple themes of alcohol, women and music. Unlike 2005’s worthwhile Walk the Line, a fine but overstylized movie about country legend Johnny Cash, I Saw the Light, also titled after one of the artist’s tunes, probes and ponders what lies beneath the beauty of Hank Williams’ simplicity.

Hiddleston as Williams is magnetic, though he is older than Williams as depicted and this fact is distracting. Other problems include a narrative device that doesn’t work and a distinct deficit of making certain themes explicit through exposition of the music, which I Saw the Light skimps on. As Audrey, Olsen is uneven and it’s through no fault of Abraham’s, because the role is rich and both cast and casting are good. Cherry Jones as his mother, David Krumholtz as a daring reporter and Wrenn Schmidt as one of his fixations stand out. But it is Hiddleston as Hank Williams who leads and charges the picture. Those eyes like deep pools plead in pain, charm and cajole and, ultimately, wearily and achingly, express a benevolent wish for happiness that make his one of the screen’s most intelligent performances.

The complications of being an artist—of being a man—of being alive come through in this opaque portrait. Whether he’s getting fired for drunkenness, struggling to hang on to his marriage or balance ownership of his work with partnership in his business or just trying to be left alone to write a song, Williams is as vulnerable, combustible and self-destructive as the best (Elvis, Michael Jackson and Whitney come to mind). Hank Williams on paper sounds like a real cad and, as shown in this adaptation of a biography by Colin Escott, et al., he can be cutting and cruel.

But in these years after the world went to war, before the nation integrated the races, neatly pocketed with Hank Williams’ ability to tell stories through poetry and song and make people believe in something—he distinguishes country music by its sincerity—in the places of the American South, one unassuming yet passionate writer emerges as a unique mid-century American idol. The voice twangs and howls and speaks in simple, rhyming lines about the hardness of living life. It made me want to know, understand and appreciate Hank Williams, whom it’s said influenced the best of postwar popular music.

For this reason, as simply as Hank Williams wrote and sang a tune, I Saw the Light seeps in, echoes and lingers. The movie shows and tells the story of a sincere and serious man whose short and troubled days on earth made an indelible impact. The best pictures about real people offer an essentialized part of the person’s life that makes you want to think about the whole of that individual life. This one does that with simplicity and universality so you end up thinking about your own life in whole, too.