The Star Wars prequel, Rogue One, induces fatigue. Though based on a major plot point in the original Star Wars film in 1977—and prominently featured in the marketing campaign—the studio asks for no spoilers and I promise this review is intended to inform and enhance, not distort and detract from, one’s cinematic experience.

That said, I wish I had known more about Rogue One: A Star Wars Story in advance. Coming so soon after last winter’s Star Wars: The Force Awakens, a better movie which takes place after Return of the Jedi, Rogue One starts in a haze of sameness that the uninitiated or occasional series viewer may find disorienting and confusing.

It’s not merely that both pictures sport a British-accented brunette in the female lead. There is also a scientist named Galen Erso (Mads Mikkelson) on strike from developing the Death Star who’s a farmer with a wife and kid on the farm like Luke Skywalker’s uncle in the 1977 movie. Other scenes are strikingly derivative, too, to the point that Rogue One feels like a stew of Star Wars movies you’ve seen before. It’s always on the verge of tying into some previously known plot point.

Aligning everything Star Wars comes at a cost. I don’t know if you’ve experienced this while seeing the current crop of series films (1977-2015) in theaters, but, whenever something remotely familiar in the Star Wars universe (no matter how obscure) appears on screen, certain audience fanatics audibly react, taking me out of the movie and making me stop and think about what connection, if any, what I may have seen (or missed) has to the story and series. It’s mentally exhausting. There’s a lot of that here, and I’m not supposed to say what. A movie should stand alone and Rogue One does, in some respects, but audience response from series fans may get in the way. 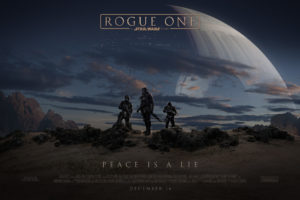 “Trust the Force” is Rogue One‘s meaning, which is neither more complicated nor more logical than that. Tracking Erso’s daughter (a bland character ably played by Felicity Jones), the tale of mild intrigue revolves around the rebellion’s efforts to halt construction of the evil Empire’s Death Star. As a girl, Erso’s daughter Jyn witnesses an act of heroism and it’s implied that she gets some sort of training (and there’s a kyber crystal) but, more than Rey in The Force Awakens, she inexplicably becomes an adult who’s suddenly imbued with technological, weapons and combat superiority and a curious blend of cynicism and idealism. Lacking sufficient development, Jyn’s journey runs rather flat.

This is not to say that all is dull. Indeed, parents best bear in mind that the Death Star as a means of mass death is fundamental and Walt Disney Pictures’ Lucasfilm doesn’t go soft in this regard. Rogue One reminds everyone that the series created by George Lucas is extremely dark and death-driven. The body count climbs pretty high.

With balmy beaches, jungles, rainy weather, Imperial walkers and destroyers, all kinds of new and familiar aliens, returning cast members, computer generated surprises and new characters, such as a blind monk who may have a same-sex partner (it’s a bit vague) and a drone dubbed K-2SO voiced by Alan Tudyk (42) that’s both less prissy and more jaded than C-3PO, Rogue One has a lot to look at and listen to. Among the new ride-alongs with hard-charging Jyn are a cagey rebel named Cassian played by Diego Luna (the most developed, consistent and interesting character). A pilot named Bodhi (Riz Ahmed) seems half-stoned for most of the movie. But even an urban scene evoking Ridley Scott’s Blade Runner channels the series’ proclivity for hooded, cloaked and caped creatures.

All the rebels are divided over an “extremist” (Forest Whitaker, Arrival, Phenomenon, Black Nativity) who proves crucial to the cause, though he’s not in Rogue One for long. Writers Chris Weitz (Cinderella) and Tony Gilroy (the Bourne movies) do their best and cram heaps of plot, character and action, especially in the battle-heavy third act, to dramatize the rebellion converging to win the star wars.

“The Force wills it,” someone says in a climactic battle, and Rogue One may be the most explicitly religious of the Star Wars movies, turning the Force into a catchy new chant. An infidel converts to mysticism. So Rogue One is more about having faith than it is about going rogue. Director Gareth Edwards (2014’s Godzilla remake) downplays compelling and ethically and politically-charged points—questioning unchecked government surveillance of communications, what constitutes peace and security and why self-sacrifice is the series’ highest virtue—in favor of the generic idea that buying time for the good to prevail requires faith, sacrifice and mass death, with hope and dry humor sweetening what’s at root a dark and bitter deal.