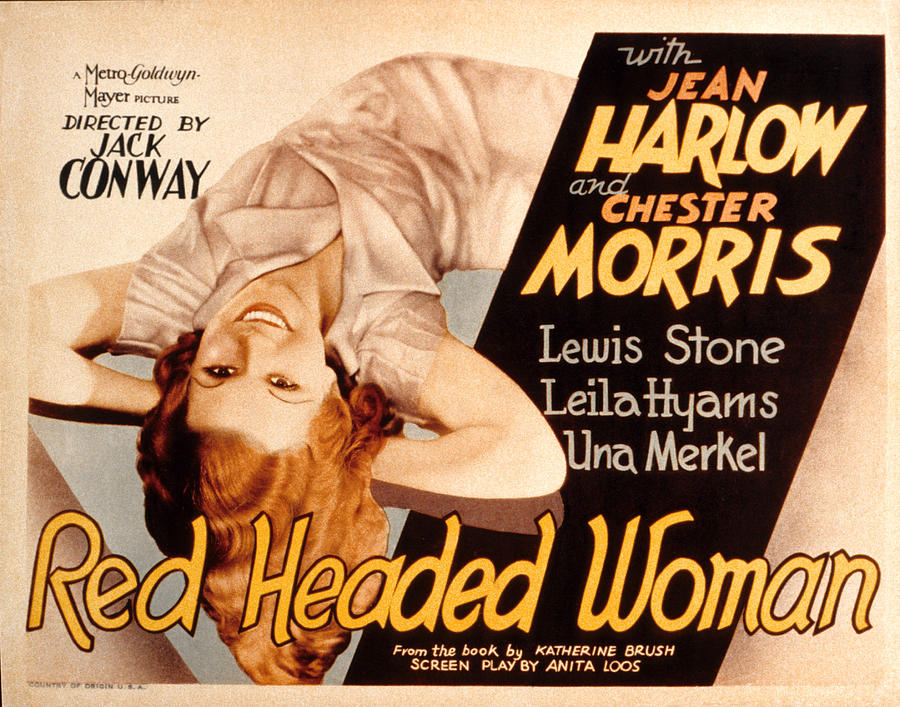 Played as comedy to smuggle its explicit sexual themes into the vibrant picture, which I saw in 35mm at the Egyptian during TCM’s Classic Film Festival, Red-Headed Woman is really more of a tragic, cautionary tale with touches of melodrama. Based upon Katharine Brush’s scandalous novel, adapted by one of H.L. Mencken’s favorite female writers (another was Ayn Rand, whose We the Living he hailed), Anita Loos, Red-Headed Woman was a hit.

Like Baby Face with Barbara Stanwyck—who wanted the lead in Red-Headed Woman (so did Greta Garbo, according to film scholar Cari Beauchamp, who introduced the picture), this story of a secretary using sex to gain power, money and status is astounding for its plain depiction of a woman whose self-esteem is based on objectifying herself, which is to say denying herself any authentic, reality-based estimate of her own value.

“If the barn door’s open,” Harlow’s harlot deadpans to Una Merkel’s best friend and roommate (one wonders if she’s also Harlow’s lesbian lover on the side), “what’s to keep a girl from goin’ in?” Slither on into the home of her boss businessman’s home she does, knowing that his wife (Leila Hyams) is out of town, seducing him with a conniving sense of delirious mission. As Lillian (“Lil” aka “Red”), Jean Harlow (Wife Vs. Secretary, Red Dust, Design for Living, Libeled Lady) is simply perfect. It’s not her look, as such, or beauty, that taunts boss man Bill (handsome Chester Morris) and drives him wild for sex. As with most sex-starved golddiggers, it’s her constant availability, daring desire and her radically open want for sex. He’s putty in her presence and, it’s hinted, they usually end up going at it on the floor, but every seduction is fully earned. Harlow, who purrs “Beeeeww” when she wants him to want her, pins the part in every scene.

Directed by Jack Conway with panache, Red-Headed Woman has powerful, propellant energy, and part of that emanates from the great performances but part of it also comes from the drama. A marriage is at stake and this sexual power-luster is hellbent to ruin it. Whether she succeeds, and what constitutes success, is the movie’s core. Setting every man from a “coal king” to a French chauffeur (Charles Boyer in an impressive turn) who may be her lowdown counterpart, in her crosshairs, the red-haired woman willing to prostitute herself that Bill’s father (Lewis Stone as the movie’s moral center) calls a “snake in the grass” gets exactly what she wants, it’s suggested, and probably, ultimately what she deserves.

“Do it again,” she tells a man after he slaps her to make her stop making him want to grab her and kiss her, adding with a well-timed punch of her own: “I like it.” Red-Headed Woman is an interesting portrayal of a woman of the flesh—neither endorsement nor repudiation, but stark and honest—who lets men have her so she can really let them have it. In this sense, it’s dark and cynical, an attitude that became prevalent in American culture. The hard and complex Red-Headed Woman, driven by coarse and severe delusions, breaches and titillation, at once dramatizes the slut with sex appeal and forecasts its own function as a culturally self-fulfilling prophecy.