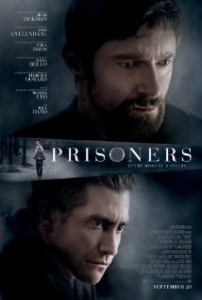 Prisoners is taut, gripping and overdone. The simple mystery features an all-star cast supplementing two main characters, played by Hugh Jackman (X-Men movies) and Jake Gyllenhaal (Brokeback Mountain), that both insist on making up their own minds.

The action hinges on two missing kids, what happened to them and whether a mentally deficient adult (Paul Dano) has anything to do with what may or may not be a crime. The cop assigned to the case is portrayed by Gyllenhaal. He is slow, methodical and reliant on facts, evidence and the wisdom of his own experiences which have yielded a perfect track record. The father of one of the missing children, played by Jackman, is fast, sure and reliant on crutches such as guns, alcohol and religion. The plot centers on what he does in the days that follow his daughter’s disappearance.

Whatever else, with the “Our Father” prayer, deer hunting and a cross hanging in his pickup truck, it is clear to see why Jackman’s pappy thinks what he thinks and does what he does, though it is extremely severe. He eventually involves his friends (Terrence Howard and Viola Davis), whose child is also missing, and the harsh conclusions he reaches affect his family, too. There is at least one gaping plot hole and some inconsistencies but none get in the way of the central plot progression that moves toward an exciting climax that makes perfect sense if you think about it.

Prisoners is not as deep as it sounds or as smart as it thinks it is but it is a good, solid thriller even though it’s overacted and overbaked. The theme that we are all sinners and prisoners here serves a tale well told, though it is best consumed as a procedural whodunit episode, like a special two-hour piece from Dick Wolf or 24 or one of those 90s genre pictures such as Silent Fall or The Hand That Rocks the Cradle. Gyllenhaal and Dano are especially good here. Expect graphic violence, twists and the screen’s most realistically sinister character in a long time.