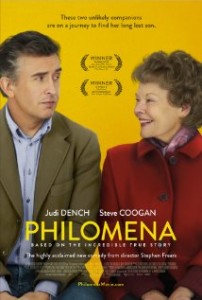 Philomena dramatizes an act of force caused by faith and ameliorated by an act of trade.

Throughout the picture, on many levels, two parties exchange values. The plot begins with a young, unwed couple having sex during a carnival. It moves to the young, unwed woman giving birth at an Irish convent, where she has been sent as a sinner. There, she is kept until, as most people reading this know, the child is given up for adoption. The woman, Philomena Lee, a real person portrayed here by the indomitable Judi Dench, seeks as an elderly woman to find her stolen son.

His name is Anthony. For most of Philomena’s adult life, all that’s known about him is what memories she gained during her brief time with her son at the convent before he was taken: Anthony clutching a toy airplane. Anthony with his playmate Mary. Anthony with the toy airplane again. A lifetime after he was adopted by an American couple, insatiable Philomena, seeking answers from the Catholic convent, wants to know about his life.

By all evidence, including an intelligent, adult daughter, Philomena has gone on to live a happy, rich life, working as a psychiatric nurse. But this only makes her want to take stock of her son’s life, what became of him, whether he thought about her as she thought about him, and other thoughts that any selfish parent would think. Through her daughter, she meets a cynical, pompous and pretentious journalist (Steve Coogan, who co-wrote the script) who worked in left-wing politics and lost his reputation. He reluctantly hears her story out and accepts an assignment to write about Philomena’s search.

Together, these two sinners in politics and religion set out to find facts, lose, keep or have faith and, locate the man who was once a boy known as Anthony. In the end, what they find foremost are lessons from one another. Coogan’s obnoxious writer, Martin, earns self-respect. Philomena finds salvation. As they venture to the United States, relocating Mary (Mare Winningham) and various people connected to Philomena’s son, their trade – his ability to think for her capacity to believe – allows them to form a mutual bond like that of a mother and son. The messiness of three such despised and low, depraved institutions, politics, the press and religion, intervenes. Through it all, Philomena and her researcher-reporter sort the issues in what amounts to an honest, enveloping search for meaning in life.

Yes, Philomena is that serious and that enjoyable. They travel here and there from London to Washington, DC, exploring belief, gossip, doubt, sex, love and life, circling back to their own innermost insecurities and powerful realizations about their shared, fundamental flaw: self-denial. This is a very Catholic idea and this is a very un-Catholic movie, a fact which Catholics I know seem to sense about Philomena sight unseen. But Philomena, made by the Weinstein Company, is not an anti-Catholic picture. To a certain degree, it holds back on judging the evil done to mother and child, a subtle but serious flaw but more about that later.

The pairings – mother and son, church and parishioner, avenged and avenger – continuously and brilliantly loop until the movie comes to America in earnest and goes far and wide, expanding and opening into bright colors, outdoor spaces and glorious discoveries. Philomena in exploring life and one’s fitness for life finds the holy grail: the United States of America. This sacred ground is worshipped here, with reverence for our philosophical forefathers Abraham Lincoln and Thomas Jefferson and all things American, including the most frivolous joys such as comedy in motion pictures. In America, Philomena searching for her son is enlightened, ennobled and uplifted and finally rejuvenated – and not without wry observations and real pain and rejection – and, intentionally or not, Philomena recognizes the U.S. for its highest achievement: the country founded on the selfish pursuit of one’s happiness and the liberty to live as one chooses.

Without giving away the plot, this is what Philomena discovers about her son. She answers her own central, driving question about her fitness for motherhood and finds and deposits the values she gains from the trade with Martin. All is bittersweet, and unbearable, unlikeable Martin, too, is finally and rightly put in his place. For its part, the Catholic Church gets off easy and this prevents Philomena from achieving greatness. By controversially taking license with the real facts and singling out one nun, the film’s evil Hildegard, whose morality is fundamentally Christian, Philomena turns the other cheek on the Church’s complicity in the injustice done to Philomena Lee. The true story is undeniably much worse than what is depicted in this film; the magnitude of widespread, institutional conspiracy to do evil to fellow men and women is enormous even on Philomena’s terms. To telescope, composite and apparently fictionalize the abbey’s acts of faith and force to one nun minimizes the pure evil done there. What the Church did to this woman is an atrocity. Pinning it on Sister Hildegard lets the Catholic Church off the hook.

Nevertheless, director Stephen Frears has created what amounts to the third piece of a trilogy in movies depicting deep, interesting women of our times. His Mrs. Henderson Presents also gave us Judi Dench bucking tradition in wartime London as a widow and mother in mourning who dared to bring pleasure to the men who fought for England. His film The Queen did right by a strong British woman who is also the queen of England remaking tradition for the good. His treasure Philomena, flawlessly scored by Alexandre Desplat, delivers the tale of an ordinary Irishwoman who goes against the Catholic Church, tradition and, moreover, the looming darkness of modern civilization, for her own knowledge, enlightenment and happiness. With Judi Dench, as she did as a grandmother in Lasse Hallstrom’s Chocolat, layering scene after scene of a person falling in love with life all over again, Mr. Frears’ Philomena is a triumph.