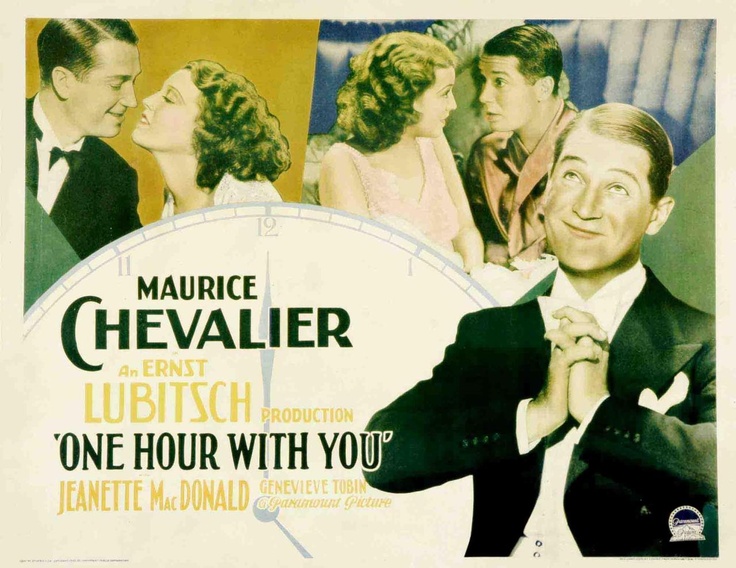 Maurice Chevalier and Jeanette MacDonald star with Genevieve Tobin as a temptress-best friend who’s double-crossing her gal pal to seduce the husband in Ernst Lubitsch’s witty One Hour With You. This is not as frivolous as it might appear.

With a deft, pre-Code sexual simplicity, terrific cast, rhyming dialogue, fourth wall breakdown and light, charming songs, it’s easy to see why One Hour With You demonstrates the Lubitsch touch. As with everything he did, Lubitsch adds a layer here and there to provide depth to the gay look, feel and music with real, complex attitudes about women, men, sex, friendship and marriage. Though George Cukor had already been asked by Paramount to direct, this movie became a pet project for Lubitsch (The Shop Around the Corner, So This is Paris, The Merry Widow, Ninotchka, Heaven Can Wait (1943) To Be or Not to Be), who apparently bonded with Chevalier in his endeavor to re-cast the film for his own creative purposes.

The result, with Chevalier’s smiling, debonair doctor husband speaking and singing directly to the audience, is 80 minutes of one man’s account, perspective and philosophy of romantic love, which I saw at The Egyptian on Hollywood Boulevard in 35mm during the TCM Classic Film Festival. How One Hour With You begins—in France’s City of Lights, Paris, at a public park being policed for public displays of affection—is crucial as pretext for the surprisingly fabulous plot resolution. Doctor Andre (Chevalier) and his wife Colette (MacDonald) set the terms that wanting sex and being greedy to make love are utterly human and crucial for a healthy marriage. “What a Little Thing Like a Wedding Ring Can Do” is a standout tune for its easygoing wit and intelligence but all the songs are bright, cheerful and entertaining, even if at the root Mitzi’s (Tobin) seduction is both humorous (because it’s played as irony) and arresting (because it’s realistic).

So, it is not exactly that One Hour With You equivocates about infidelity (someone today is sure to call Chevalier’s smiling and singing “mansplaining”) or rationalizes its potential wreckage. This is a man of medicine who resists temptation, says “phooey” to the anti-sex police and knows a hussy when he sees one (and Tobin’s performance as the tramp is delivered with conviction). Andre loves Colette and all the songs, silk pajamas and Parisian airs, charms and sets only reinforce that he loves his work, life and sex, which only makes what happens perfectly understandable and, in a certain context, enjoyable. An hour can feel like a moment, One Hour With You demonstrates in melody, rhyme and lightness, and a moment’s yield to whim can lead to an hour’s agony. What to make of any given moment, and hour, is ultimately up to you.