Having enjoyed movies, but, really, most stories in any format, about escaping Communism, I recently discovered Never Let Me Go (1953) co-starring Gene Tierney (Leave Her to Heaven) and Clark Gable (Gone With the Wind). It’s good. I recommend it as crisp, taut entertainment.

Do not expect philosophical depth on the level of We the Living or The Lives of Others. It’s not that caliber of anti-Communist filmmaking. But, especially for the Fifties, when Hollywood’s disgusting affinity for Communism, in particular Soviet Communism during its bloodiest era, reached its zenith and was all the rage, Never Let Me Go takes a strong position against Soviet Russia with two major movie stars. This alone merits awareness and remembrance. With renewed relevance due to Communist China’s unceasing influence on, and what amounts to extortion of, the American press and technology and gaming industries, it is both pointed and fierce. 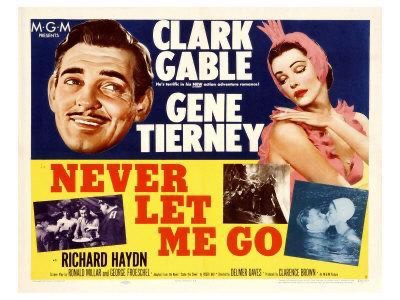 Gable stars as an American reporter who’s savvy about Soviet Russia, having covered the U.S. ally during World War Two. But, being an American, he’s uniquely naive, as Ayn Rand explained during her historic 1947 congressional testimony, about the fact, scale and depth of pure evil of the Soviet dictatorship’s impact on daily life; he can’t fully conceive it and this shows in his narrative and initial actions in post-war Moscow.

He learns. This is not made explicit but it’s undeniably implied and embedded in what he chooses to do after falling in love with a ballerina (Tierney with a Russian accent). He’s been in love with her from the audience of the ballet for two years. Early on in Never Let Me Go, they meet once backstage after her encounter with his British press colleague, who is more compliant with Soviet censorship. Her name is Maria. He is shocked that she confesses that she’s spotted him in the crowd and has fantasized about him, too.

This is late career Clark Gable but he’s still Clark Gable and his gallantry, strength and fire still light up the room. Tierney, too, a beautiful actress of ability, shines here as the Russian ballerina, conveying the loss, pain and superior firsthand knowledge of Stalin’s barbarism and dancing in the climactic Swan Lake which precedes an elaborate, tense and daring attempt at defection when the Communist regime moves to strike the couple down.

Thirty-two years before director Taylor Hackford put Mikhail Baryshnikov as a ballet dancer who conceives of a brilliant defection to escape Soviet Russia in White Nights, director Delmer Daves (Destination Tokyo, Dark Passage, Spencer’s Mountain) featured one of the screen’s greatest movie stars as an American journalist who creates for the woman he adores a way to escape the 20th century’s worst dictatorship. Never Let Me Go, involving forged, earned alliances of shared values, mastery of the sea, swimming in the cold, dark water, a horrifying car chase, luck and a stunning surprise at the ballet, holds true to the end.