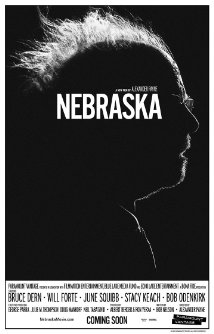 Like his movie The Descendants, director Alexander Payne’s Nebraska is pained, tortuous and aimless. It is too bad that the talented actor Bruce Dern (Silent Running, Black Sunday) is shoehorned into this thankless role as a delusional old drifter who thinks he’s a prize winner. Dern deserves better. He deserves a character in a plot for starters.

Nebraska, filmed with evocative shots in black and white, exists to recreate a blank mood which presumably expresses the filmmaker’s theme that plains states such as Nebraska, which is satirized with stereotypes, are blank, pointless and nomadic. Dern’s character’s family is cruel, biting and shallow. Only his son (Will Forte) is kind and he’s a dolt, another blank slate with an electronics store job and a dumpy girlfriend from whom he wants nothing but sex. The wife and mother, played by June Squibb overacting as a harridan, is a foul-minded shrew.

As close to meaning as Nebraska, which does for the great American state of Nebraska what The Descendants did for Hawaii (which is to say nothing), gets is that the clueless old coot wants more than he has earned which to Payne and the writer is entirely human. Life literally and figuratively passes by the man and his son, who team up to go from Billings, Montana to Lincoln, Nebraska to collect the dubious direct mail prize. That a few bawdy tales, low points and a life lived smaller than life are portrayed here as some sort of poignant lesson, profound in its plainness, is as bare and artificial as Nebraska. With what passes for conflict with a bar bully played by Stacy Keach, this picture packs platitudes with big, fat air pockets. Don’t miss the chance to pass this up. For Bruce Dern at his best, see almost any of his other pictures.