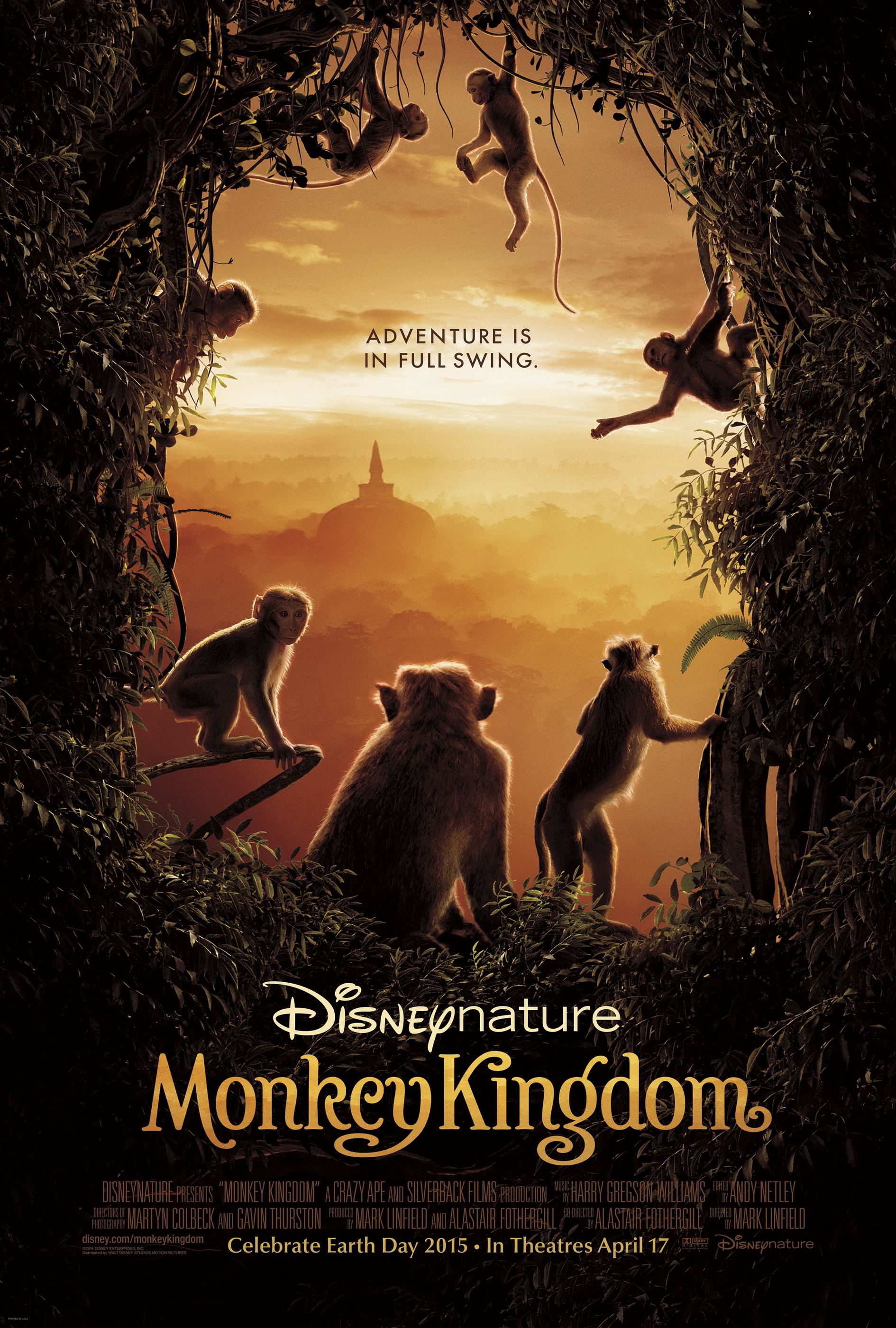 Nature-themed movies, programming and filmstrips of yesteryear have slowly given way to a perceptual-bound recreation of, or immersion in, nature that has very little to do with the facts of natural, or animal, life.

Forget ecologist-oceanographer Jacques Cousteau or Marlin Perkins and his Mutual of Omaha-sponsored Wild Kingdom series; today’s ecopics simply show images with loosely structured words in fragmented sections intended to elicit emotionalism based on faith in earth, nature or animals. This is especially so with the newest movie from Disney’s nature subsidiary, Disneynature, Monkey Kingdom, another release in its Earth Day ecology propaganda series (Earth, Chimpanzee, Oceans). Thoroughly educational and informative nature-based storytelling in movies such as Born Free (1966) is in the past.

So is whatever respect for animals and nature those pictures possessed—domesticated lioness Elsa in Born Free was re-trained by the McKennas and released into the wild, where she eventually thrived—giving way to today’s thinly veiled anthropomorphized pap. In Monkey Kingdom, monkeys are given backstories and loaded with fictional character traits tracking to distinctly human associations.

For instance, when Monkey Kingdom, narrated by audibly unrecognizable Tina Fey (Admission), introduces monkey mother Maya, part of a tribe that lives among man’s ancient ruins in the jungles of South Asia, her background is presented without key facts. Instead, nearly everything written and spoken about Maya’s struggle for her baby projects human qualities. The whole movie does this about all the animals, demonizing a leopard and females higher up on the tribe’s chain, sanctifying Maya as a proletarian, disregarding the needs of human villagers who live in near poverty, all while playing pop music to monkey shenanigans. I learned almost nothing new about monkeys.

Almost every aspect of Monkey Kingdom is humanized for calculated audience response under the guise of helping “the environment”, as meaningless a euphemism as helping (which means imposing government control) for the sake of “the children”. Humans in the movie are looted, never mind that their ancestors built the ruins in which the monkeys live. A child’s birthday party is ravaged and destroyed by the rampaging monkeys. If this happened for the sake of a lesson about the monkey, it might contain some shred of an audience payoff. Instead, Maya the monkey is lauded for her “street smarts” and her son is adoringly referred to as a “little boy”. How monkeys make and give birth to offspring remains unseen; kids learned more about sex and reproduction from third-grade classroom films about insects. Monkey Kingdom plays as if it’s been pre-ordained by Puritanical feminists or religious fundamentalists.

Directed by Mark Linfield, who co-directed Disneynature’s middling Chimpanzee, and co-directed by that movie’s Alastair Fothergill, Monkey Kingdom doesn’t strive to educate and enlighten as much as it aims to entertain with mildly amusing monkey moments. Highlights include a termite feast for most creatures in the jungle—again, don’t ask why everyone eats them—a death in the lily pond (which is as invisible as Maya’s sexuality) and good photography when the camera lingers. It’s not as heavy-handed as some ecology movies in its guilt invocations, though the film does assert that a cell phone tower which is likely to have brought lifelines for medical emergency assistance and wealth production to the poor “rightfully” belongs to the monkeys. Seriously.

But the more Disney conserves animals and lands, the less Disney educates people about those animals and lands. Exotic scenes and what must be either staged and fabricated events or startlingly harmful acts with an adverse impact on man’s environment may be mildly satisfying to some, and there are a few chuckles and thrills in Monkey Kingdom, but those who seek to know about monkeys, including what makes these monkeys different from other monkeys, will need to read a book from a bygone era.