Depicting Thurgood Marshall as brash, fast-talking and arrogant, with a chip on his shoulder, some might even use the word “uppity”, especially in 1941 when the movie Marshall takes place, fall’s new biographical picture features Chadwick Boseman (Get On Up, 42, Black Panther in the Marvel Comics film series, such as Captain America: Civil War) in another fine turn as a man of ability. 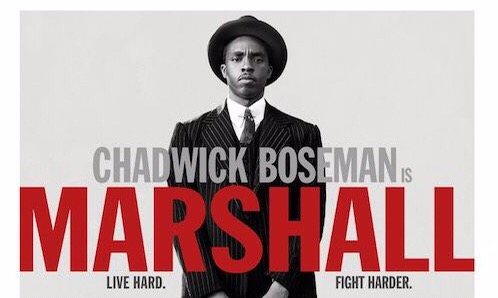 Steeped in grainy, period detail with Ruth Carter’s costumes, a kind of reverence for black subculture and U.S. history and a mocking reference to “old Negro superstition”, TV director Reginald Hudlin does a skillful job, too, recreating a single, early marker in the life of the late U.S. Supreme Court Justice Thurgood Marshall. Marhsall was a lone lawyer for the National Association for the Advancement of Colored People (NAACP), a historically enslaved and persecuted group of Americans that needed a legal defense different from whites because they were treated as lesser than whites.

Enter Marshall, who’s riding rails to defend presumably innocent blacks when he’s not stirring up trouble with Harlem renaissance figures such as poet and Communist sympathizer Langston Hughes (Jussie Smollett, Empire), who may have been gay, and freethinking Republican Zora Neale Hurston (Rozonda ‘Chilli” Thomas), author of Their Eyes Were Watching God. With a beautiful, pregnant young wife who wants him home more often, Marshall feels the push and pressure of being a pioneer while trying to cash in on the change he seeks to enact.

As fictionalized here, and it is dramatized with liberties taken, including certain, key facts and that Boseman looks nothing like Marshall, Marshall teams up with white, Jewish lawyer Sam Friedman (Josh Gad, Frozen, A Dog’s Purpose) and defends an accused Negro rapist (Sterling K. Brown, This Is Us) against his wealthy, white employer (Kate Hudson, Raising Helen, Almost Famous). It’s a highly controversial case with several discrepancies, an all-white jury and strict judge (James Cromwell, The Artist) presiding and, curiously, how it plays out under Marshall’s guidance contradicts current left-wing “rape-culture” dogma (read an account of the real life case with spoilers here).

The cast is outstanding and, while Marshall is episodic to the tee which will disappoint those who, like me, may anticipate a wider perspective, this applies to everyone, even supporting actors and Hudson, whose acting I’ve criticized in the past. Brown (This Is Us, Darden in the recent O.J. Simpson murder trial TV series) is among the screen’s best actors bar none and Cromwell (Surrogates, The Queen, Spider-Man 3) is at his best. So, I hope first-time feature director Hudlin makes this the first of a trilogy or something — if I dare to imagine a movie franchise based on men of the mind — about Marshall (Marshall 2: Brown v. Board of Education?) and, personally, I’d love to see spinoffs about Hughes and especially the underappreciated Hurston, though they play bit parts here. As fine a director as he is in working with his actors and establishing the scenes, and the set and production design are really fabulous, Hudlin trips with little details.

For instance, the prosecutor (blue-eyed Dan Stevens, the beast in Disney’s recent remake of Beauty and the Beast) is the stereotypical bigoted white villain. Also, I didn’t figure out that Brown’s character worked for the woman until well into the courtroom drama and I wanted to know at least a bit about Brown’s relationship with his wife, which I think might have added another layer to Marshall‘s humanist theme. As it is, however, Marshall marshals its impressive resources, including good music, with dignity and respect, and a degree of subtlety, which racist, tribalist and race-baiting critics are likely to miss.

With frankness about the NAACP’s self-serving aims, license in favor of Marshall’s role at the expense of Friedman’s and twists you might not see coming, stylish, clever plot points gently unfurl. One of them, with two men ultimately, simply disconnecting, as happens in life, accentuates the separatism.

The meaning of the movie’s lightbulb moment, which skillfully cuts to what catapults Thurgood Marshall from ambitious young lawyer to long-range thinking champion for the oppressed, may be missed if you don’t think twice. But my favorite scene entails a whites-only drinking fountain and the matter of fact way in which the title character selfishly serves and suits himself, living in — to paraphrase Ayn Rand — the future he fights for today. As with Clint Eastwood‘s Mandela movie, Invictus, 2009’s best movie, Marshall depicts Marshall in only his best and most heroic sense and it’s up to historians to sort fact from fiction. Here, America’s first black Supreme Court justice is portrayed in his younger years as marvelously intransigent. Look for an elegant ending courtesy of three characters in cameos by Trayvon Martin’s parents and their thoughtful attorney.