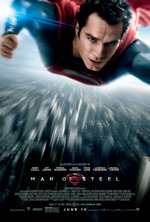 The latest Superman movie, called Man of Steel, is an origin story and it’s an entertaining movie with some standout moments and minor problems, too.

Written by the same team that created the 2005 – 2012 Batman trilogy (including Christopher Nolan), the basic plot is sound and it is compelling, though not as compelling as their other comics-based hero films. That may be due to the direction of Zack Snyder, who also directed the atrocious Watchmen (one of the worst movies ever made) and the dumbed down, fetishized dramatization of history that caught on with conservatives and libertarians, 300, which was really more of a horror movie. Man of Steel begins with Kal-el’s birth in the midst of a great battle, touched off by ecological disaster – and the movie plays off environmentalist premises and other faith-based notions – and, adding a twist to the Lois Lane (Amy Adams) character, proceeds along a well-traveled path, with the Christ-like 33-year-old Clark Kent (Henry Cavill) taking his place in the world only after strong fathering by both wise, serious Russell Crowe and wise, serious Kevin Costner, both of whom are excellent in their roles as usual.

Of course, his place involves helping others and realizing his father’s vision of achieving a universal good. He literally carries the genetics of everyone on Krypton, so there is that burden, which makes him a target of the evil General Zod and his fellow baddies, who might be described as an Islamo-Nazi-Soviet troika combining faith, duty and collectivism into a single mission of mass extermination intended to make a version of hell on earth. Add visual touches with flying gargoyle-like creatures on Krypton, a nod to Jules Verne classic science fiction – refreshingly, a scientist saves the day for a change – and prolonged stretches of scenes evoking H.G. Wells’ War of the Worlds with mass destruction and Man of Steel is less about the individual and more about everyone coming to grips with what he represents.

Superman, who’s not known by that name here for the most part, represents goodness as a mixed proposition. He’s all for taking a leap of faith, as it’s put, in order to earn a trust that comes later, and he reads Plato, favors dogs, church and science fairs but through no fault of Cavill’s he is more defined by contrast of what he’s not by villain Zod (Michael Shannon), who proclaims allegiance to the tribe and speaks about “the greater good” of the collective. It’s not nearly as abstract as I’m making it sound and long pieces of this two and a half hour film are dominated by loud pummeling of people, places and things, with placement featured for Sears, IHOP and other brands, and there are moving moments amid the comic book action, such as when Costner’s character exhibits his own heroism.

Supporting players are generally fine, from Christopher Meloni as a colonel and Diane Lane as midwestern Mother Kent, though she’s a bit too plain even for Kansas, to Richard Schiff as the scientist and Laurence Fishburne as Lane’s newspaper editor Perry White. One of the more interesting aspects of Man of Steel is the film’s total distrust of government managers – politicians – as against its heroes, who happen in reality to be among those currently maligned by the United States government; the press, the sciences and the military. I loved that Superman gets the first mention of his name from a young soldier, that the men of the armed forces welcome him in camaraderie after he earns their respect and this is appropos of a character originally created to express truth, justice and the American way, though here, too, as in Warner Bros. last attempt to reboot the series, the iconic phrase is never heard.

The Lois Lane character, who is mature, bold and modern and gamely played by Amy Adams, is miscast and slightly off. It is not an easy role as written, with her reporter alternating between a coarse challenge and a chirp about what she might do if she has to “tinkle”. It’s hard to see the chemistry if any between Kent and Lane here and the pair, battling evil all at once in scenes that are too large, loud and long, falls short of an exciting and engaging launch as a couple. Man of Steel could have been mainly about the titular hero, clearly defined and dominating the plot with Lois as an equal partner. Instead, we have a movie about a solid defender of the good, hedging on what’s good, lacking the passion of a perfect match but pulling off a summer treat just the same.