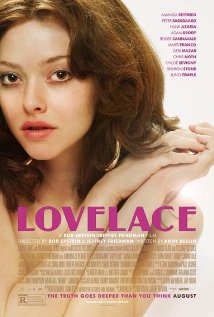 Lovelace, based on the life of Deep Throat star Linda Lovelace, touches on key cultural points and counterpoints in the age of sexual liberation, the 1970s. The film, starring Amanda Seyfried in the leading role, is not a well-constructed story, character study or drama, comedy or expose. What it lacks in graphic sex it also lacks in honest dramatization of a woman who became a microcosmic symbol of the Seventies convergence of sex, feminism and Puritanism. But like other recent films centered on 1970s’ controversy, such as Milk, Frost/Nixon and The Ice Storm, the provocative subject matter serves as a springboard.

Lovelace skims or skips that aspect, making her husband Chuck Traynor into a 70s villain of the Star 80 or Manson type; a violent hippie-hedonist bent on violating virginal female youth. Driven by the mother from hell, who’s as rational as Piper Laurie’s religious nutjob mommy in Carrie and as tender as Mary Tyler Moore’s mom in Ordinary People, essentially kicked out and into the arms of predatory Traynor, Linda goes from sweet, Florida beach angel to slutty domesticated vamp vacuuming the home in skimpy outfits and a kinky permanent wave in a few scenes. It’s not long before she’s going down on Harry Reems in Deep Throat, meeting Playboy publisher Hugh Hefner (James Franco, even worse than he was in Oz) and dodging blows from her gun-toting wifebeater of a spouse like Tina Turner in What’s Love Got to Do with It? With a jarring reset, backtrack and change in perspective, we see the same 17-day porn shoot stretch through the victim’s eyes, as she winds up reclaiming herself on talk TV, going straight and having more kids, keeping them this time around and heading for a reunion with the maternal figure who rejected her and told her to obey the man who beats her.

That said, Lovelace raises real and important issues, from the mechanics of the peep show business to snapshots of the men who made it a legitimate industry (well played by Chris Noth, Adam Brody, Bobby Cannavale and Hank Azaria). Performances are generally strong, though Sarsgaard is cartoonish and Seyfried as Lovelace is too good to be true, period detail is excellent and Karyn Wagner’s (The Notebook) costumes fit the picture. We should think about sex, talk about sex, be more rational and enthusiastic about sex and, while the imperfect Lovelace turns away from an honest exploration of what made Linda Boreman (who later divorced, remarried, divorced and died in a car crash at 53) become Linda Lovelace, it does depict a partial, cautionary tale of what happens when one has no coherent philosophy of sex and doesn’t think about sex or self at all.