The best thing about Love, Simon is its sincerity. The lead character is sincere. The conflict, a boy’s struggle over whether to acknowledge the reality of his sexual orientation, plays with authenticity. The suspenseful plot, involving narration, family, coming of age, friends and blackmail, is clever and original. The theme that genuine self-esteem comes from rational thought and virtuous action is earned. There’s nothing cynical, fake or modern about Love, Simon. The gay-oriented movie, like La La Land, Legally Blonde or The Greatest Showman, derives power from underlying truth and pop musical romanticism. Like those other entertaining films, this movie’s a good candidate to be underestimated and misunderstood.

Aside from its unabashed embrace of middle class American values, depiction of a complicated and intelligent nuclear family and subversively radical stereotype busting, Love, Simon rolls with humor, pathos and concision. It’s at once uniquely humorous, romantic and wholesome. Love, Simon is already this year’s best picture. 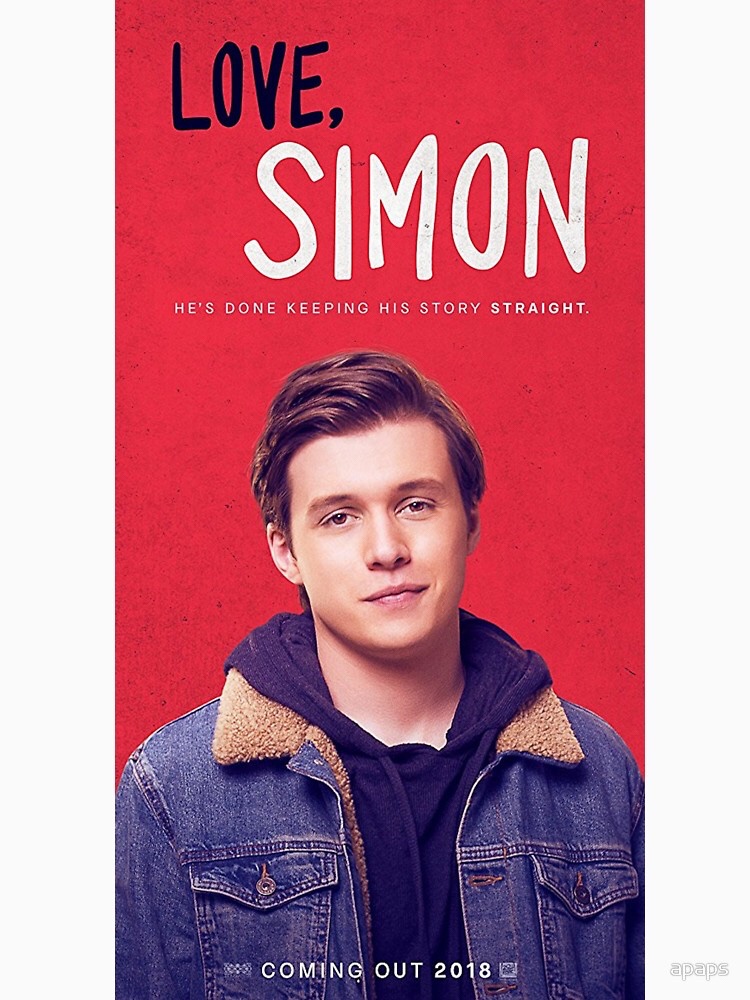 “They’re perfect”, high school senior Simon Spier (Nick Robinson, Everything, Everything) tells his sister Nora (Talitha Bateman) about her pancakes at breakfast one morning. This after his dad (Win a Date with Tad Hamilton!‘s Josh Duhamel) entices him to emerge from his secretive, closed-door bedroom. In narration, Simon’s already admitted that he likes his sibling, so this coming of age movie, directed by writer and producer Greg Berlanti (Green Lantern), is savvy to differentiate its pop romanticism from both today’s dark, death and despair oriented pictures, such as Moonlight and Call Me By Your Name, and also the flip, sensory comic book-based assaults. Love, Simon seeds its honesty early with short, sweet lines like that to let the audience know not to feel compelled to hunt for digs, addiction or manipulative parents.

This is not to say that Simon Spier’s story unfurls without complexity. On the contrary, it unspools with more wisdom and wider dimension, especially about today’s multiracial and sexual problems, than those other movies. It’s more honest, challenging and liberated about race than Black Panther, though it is subtler. It’s more realistic about coming out to family and falling in same-sex love than Call Me By Your Name, though it’s less self-absorbed. It is more universal about the gay male youth experience than Moonlight, though it is also more condensed and optimistic.

An interracial pair of bullies, whom some may suspect of being in the closet, too, are the closest Love, Simon has to villains, though a kid who wears t-shirts screaming for attention comes close. In text and electronic mail messages, Simon corresponds with an anonymous fellow classmate going by the name Blue who claims to be sorting through his sexuality, too. Simon, perhaps naively creating a generic e-mail account and starting innocuously off with “hey”, reaches out with nods to the Kinks and Smokey Robinson, later acting out courtesy of the Violent Femmes, falling for Blue as his circle of friends lands on a collision course with another lovesick kid.

Like a twist out of John Hughes’ underappreciated Some Kind of Wonderful, the plot revolves with Simon Spier spinning certain distortions out of control and out of alignment with his values. Amid parties, drinking games and desires, Simon’s secret and e-mail correspondence make an impression. Under the guidance of sexually frustrated high school authorities, compounded by screenshots, fantasies, a Ferris Wheel and the “newness” of being gay, not to mention a Freudian slip, the closeted gay kid bumps along toward wreckage of his most cherished friendships in the most psychologically astute depiction of young coming out in memory.

But this is a boy whose waking and sleeping self-taught lesson, judging by the thought chalked above his bed, is to Think. Think Simon Spier does, with a surprising swiftness, manliness and boldness which leads to one of the most rewarding moments in romantic screen history. Love, Simon excels because it is realistic, romantic and upright about the boys who become men when friends and family who claim to love them choose to rally around them. Jennifer Garner (Dallas Buyers Club) and Josh Duhamel are outstanding as parents of a gay teen. Talented Garner lets her appealing 13 Going on 30 affability weave into another understated, knockout performance.

The incredible cast performs in wide ranges as an anguished, troubled boy’s friends, schoolmates and family. Small details matter, too. A dog helps the lovesick straight girl get past heartache. A station wagon shows how the individual drives, rallies around and loves himself, leading by example. Love, Simon essentially exists to depict that loving your life means fundamentally loving yourself, your whole self, choosing friends who do, too, and making the metaphysical commitment to show up and realize the ideal.