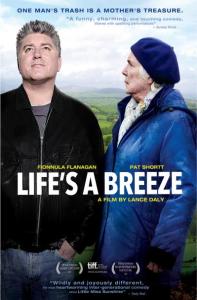 Life’s a Breeze is the story of a family searching for what the matriarch (Finnoula Flanagan) insists is a lost fortune stuffed inside an old mattress. The adult kids and their kids go searching through the garbage dumps, back alleys and streets of Dublin looking for the old woman’s mattress after they toss it out in an attempt to give her a surprise home makeover. What happens – as sibling rivalry, mother’s approval, money, aging and the prospect of dying come into play – feeds the film’s theme, a twist on the Spanish proverb about taking what you want and paying for it. This is an unusual and poignant slice of life in Ireland.

It could happen anywhere and, though the poverty of Ireland’s welfare state permeates the movie’s downtrodden characters, who are all dependent upon the government in some way, Life’s a Breeze expresses a universal idea about family. The mother sees her children, most of whom are cruel, callous and hard to like (this is what being on the dole reduces men to), for who they are as the hunt for the money-filled mattress goes on. She also sees herself, the best and the worst, for who she is. The kids and theirs are in and out of her home, as the press gets wind of the missing mattress and all of Dublin wants to cash in on the unearned, and mother begins to accept that the parasites live through the host she chose to become.

This realization is not taken lightly and Irish life is bleak, gray and depressing as seen here, with pockets of black family humor as the proverbial pot of gold glimmers from the end of a government recycling center. But it is not dim at the core. As the mother watches her struggling kids come and go, and feels herself growing older with all that this implies, she becomes aware that her own limitations, reservations and choices can be seeded to profit the youth who is her grandchild: a quiet, intelligent girl named Emma (Kelly Thornton). This willful child is the soul of the story. She sees her family, its poverty – its fundamental impoverishment and renunciation of the prospect of self-enrichment – and the enveloping darkness and she chooses to watch, observe and think about the fountainhead of the unseen wealth instead. The relationship between old and young here is preciously well developed, from the hat the grandmother makes for the girl to the fact that the girl chooses to wear it to spare her grandmother’s feelings and everything this bond means.

They choose to love based on shared values, not blood, and they learn that loving one another is not easy. The girl goes hungry and a scene of Emma eating a slice of bread is one of the most powerful cinematic moments (and too many in today’s entitlement states may be able to relate to it). Emma stands up to Nan, as the deteriorating grandmother is known, too, and is hurt by the old battleaxe. Yet the child represents the true spirit of endurance, enterprise and authentic enrichment and it’s her relationship to reality – not the grating and irritating if dimensional adults – one should watch to feel the freshness of Life’s a Breeze, which is best experienced with granny and the grandkids.

Of course, these days life is not breezy at all. This is what drives the movie’s theme that effort and, above all, the willingness to be bold and radical in thought and action, pulls you through. It comes slowly, thoughtfully, in a scene with Emma cashing in on what she’s earned while looking over a city on the verge of ruin – and choosing to never let her newly discovered treasure go.