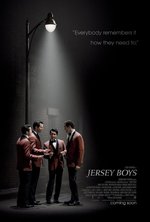 What began 10 years ago on a stage in southern California, a rags-to-riches-to-rags-again musical called Jersey Boys based on the doo-wop band The Four Seasons, is in motion pictures pure escapism. Warner Bros. and director Clint Eastwood (Invictus, Hereafter) take a light yet layered approach to adapting the Broadway stage musical, putting the audience into the lounge, the state fair and the world of four boys from the Garden State who hold on to their boyishness to varying degrees after the ravages of fame, the criminal underworld and the late 1960s drug culture took their toll on the quartet.

They were a microcosm of American culture and Eastwood, stripping the political correctness and delivering an anthology of pop music with such anachronistic charm that it’s downright fresh and lively again, offers a story in pictures. Jersey Boys (I haven’t seen the stage version, which premiered at the La Jolla Playhouse before moving to Broadway in 2005) traces the band’s origins, trials and tragedies in four revolving narratives that parallel the hits, from “Sherry,” “Big Girls Don’t Cry” and “Walk Like a Man” to “Can’t Take My Eyes Off of You”.  The cast is excellent, with John Lloyd Young reprising his portrayal of lead singer Frankie Valli, whose falsetto defines The Four Seasons, who are indelible in pop music.

Beginning with hoodlum Tommy (Vincent Piazza) working under mobster Gyp DeCarlo (Christopher Walken) who is under the spell of sweet Catholic boy Valli’s voice, the first part of the tale is dominated by Valli’s relationship with the protective street thug. Eventually, and the story centers upon Valli’s struggle to stay decent and honorable, Valli’s loyalty to the old gang clashes with the demands of true artistry, which, in turn, is a factor in wrecking his family life. Valli the street urchin goes by Tommy and, later, Valli the singer goes by songwriter Bob Gaudio (Erich Bergen), who wrote or co-wrote all of the group’s biggest hits. The conflict between Valli’s allegiances leads to internal power struggles, resentments and secrets. This leaves Nick Massi (Michael Lomenda) neglected and forgotten. The families are even less remembered than that, a fact which exacts the highest cost.

Thus, Jersey Boys, based on a screenplay and musical book by Marshall Brickman and Rick Elice and song music by Bob Gaudio and lyrics by Bob Crewe, depicts with subtlety the music business and the epic, sometimes violent, clash between the creative and the commercial. This is Eastwood at his most introspective, with impeccable period detail in amber ashtrays, red convertibles and syncopated dance steps on American Bandstand with sharp photography and production design. Don’t look too closely, as characters such as Valli’s wife disappear and then pop up again and too much, especially how damage is done and how great performances are made, is unseen. But the business of art and the art of business is on display, too, especially in a portrayal of record producer Bob Crewe by Mike Doyle, bringing the right combination of enlightenment, sophistication and panache into each of The Four Seasons, bridging the gap in Frankie Valli, who must choose between the street persona and the stage persona and the two men who represent each.

What happens costs Valli dearly and Jersey Boys is refreshingly realistic. As the quietest Four Season says when he finally snaps – in a biting line for people that blithely denigrate pop stars such as Whitney Houston, Justin Bieber and Miley Cyrus for acting out – “sell a hundred million records and see how you handle it”. This movie shuffles between and syncs pop sensibility and the anxiety of making art and watching it still feels and sounds good. For an extra feel-good kick, stay for Jersey Boys‘ closing credits.