It is a scary movie, no more, no less and better than most horror movies these days, not that I’m an expert in the genre (which I generally abhor). I have seen and do appreciate the occasional good horror movie. I saw the new adaptation of Stephen King’s bestselling novel with a true King and horror fan (who hated It) at Hollywood’s Cinerama Dome at the ArcLight on Sunset Boulevard. 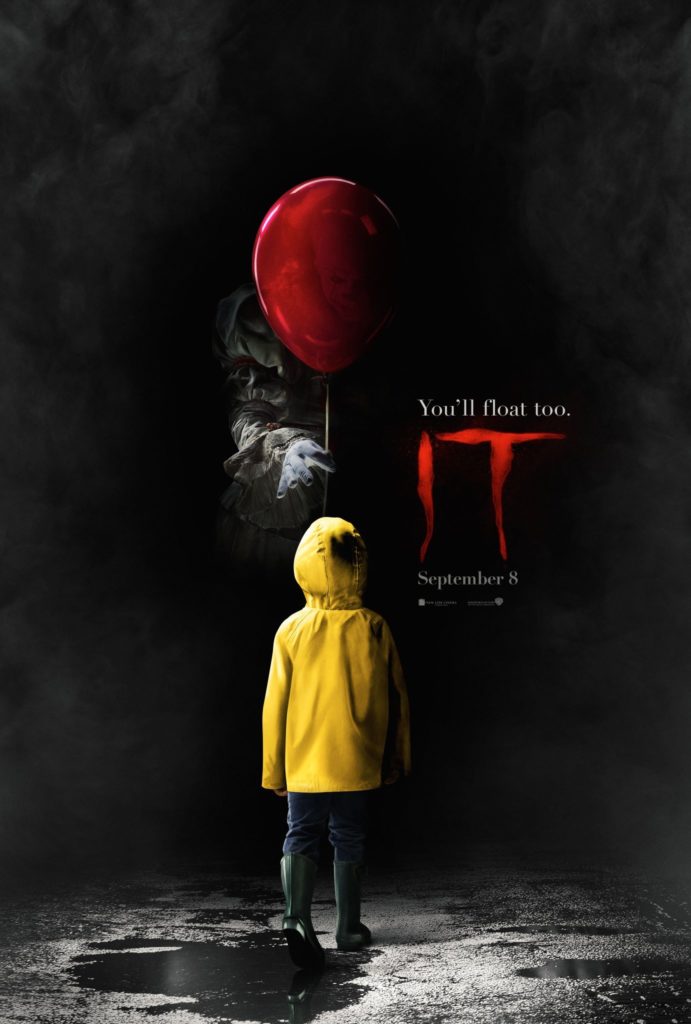 Buy “It” on Blu-Ray/DVD/Digital

Beginning with the sounds of a nursery rhyme and a boy’s laughter followed by a floating red balloon, It signals that this is a dark fairy tale which plays centrally on fear, not gore. There is a difference. In this sense, It, like the 1990 TV miniseries adaptation, is not as gratuitous as today’s blood porn, though there are buckets of blood. It isolates and examines potent childlike fear in each character: Georgie, the adorable little brother whose stuttering older brother Bill (Jaeden Lieberher, St. Vincent, Midnight Special, Aloha) leads a group of bullied grade school boys, fears going into the basement. Another boy fears germs. More than one kid fears a parent. Or facing life without the parent. And so on. This band of prepubescent boys is like a bundled afterschool special in 1988, the year this New England town-based tale takes place; there’s a Jew, a black, a heavyset kid, a sick one, a stuttering one, a boy with eyeglasses. Later, a girl joins the bunch.

They have deeper fears, of course, and It gets into certain character subplots more than others, with serious themes of adult abuse of children underlying each kid’s story. All the adults — from parent and policeman to pharmacist and librarian — in this tidy little Maine town are lousy, rotten or evil, some by benign neglect, others by calculated choice. This makes It more involving. The contrast between child and adult gives the kids an additional layer of fear and it seals the audience bond. There’s something to be afraid of for almost everyone.

Fear takes the form of a monster carnival clown that anticipates, amalgamates and promulgates each boy’s fear. When one of the kids does some historical research, a pattern is discerned that enhances the mystery of the town’s children and what they may have in common. On top of everything else are a bunch of bullies, all white males, riding around in a black Pontiac Trans Am that’s as menacing in a way as the clown. A girl bully plays a role, too. One of the kids’ grandparents says the town’s cursed and it certainly isn’t lacking in miserable human beings. But this only makes the band of brothers more endearing, despite their handicaps, flaws and irritating habits.

For example, the token female (Sophia Lillis) has a tough exterior, which is sufficiently explained, and flirts and shoplifts her way into the boy’s club. All of the kid characters have some mildly challenging, annoying or morally questionable practice, habit or action, and, between the kids’ burdens to bear and their adult parents and guardians, It provides a stark lesson in how friendships form, fall apart and form lifelong alliances. I say stark because the story encompasses a lot of themes without really developing them, so there’s a hint or suggestion here and there about issues such as grief, body image and puberty. The main theme that love conquers evil, or friendship trumps fear, comes through.

With a few shock moments, a murder that goes unresolved and a few flat characters, It‘s far from perfect. As I said, It‘s a scary movie, no less and no more than that (and Bill Skarsgård as the clown is spot on). It brushes up against loss, pedophilia, alienation, incest, overprotective parenting and physical abuse and more, with computer-generated horror, songs by the Cult and the Cure and lots of juvenile banter that titillated the audience at the Cinerama Dome. But, with a strong leading cast and a consistent theme that one’s darkest fears can be conquered — and how refreshing to see a band for once in an absolute, unfiltered, unequivocal and unified assault on evil — to mine the good, It delivers steady, gripping terror, thrills and, at its best, something to think about that transcends fear.