Opening with the sound of a slowly pulled bow on tightly bound strings, writer and director James Schamus’s adaptation of Philip Roth’s 2008 novel, Indignation, is a lush, solemn and thoughtful, if not entirely convincing, movie. This is the first feature motion picture directed by Schamus, a Midwesterner and Hollywood studio executive, producer and writer whose work is evident in other serious films such as The Ice Storm, Milk and Brokeback Mountain, all of which are somber, subtle and moving and highly recommended. 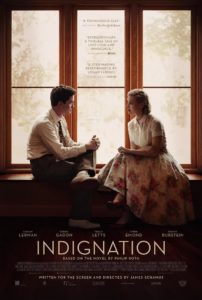 Though Indignation is slightly less successful than those pictures, it is also subtle, dark and thought-provoking. Newark, New Jersey, native Marcus (Logan Lerman) is the film’s focus and he narrates in short voiceovers, adding mystery to this already mysterious tale of a Jewish atheist attending a Christian college in the Midwest. One layer after another, beginning with the vague, nebulous, forgotten Korean War, gently falls over the plot, which takes place mostly at night, on campus, giving the whole 1951-based movie its look and feel of the Fifties in dark shadows.

Repression is everywhere, of course, especially here in an educational institution which, like today’s stifling leftist “safe spaces”, is ruled by tradition, faith and dogma. Marcus, like every other student, must attend religious services. When he finds his assigned dormitory mates similarly smothering—and this butcher’s son already feels smothered by his kosher, neurotic parents—he requests a new housing situation and gets sent to the dean’s office, where he is horrified to discover that the academic, like most modern education intellectuals, holds that the purpose of Marcus’s education is to learn to “get along with others”.

This is only one of several conflicts and, with Marcus as the individualistic freethinker, engaging, relating and sympathizing with this young innocent is natural. As he rises to the title’s state of irritation with unjust authority, former baseball and debate team captain Marcus finds release, romance and possibly more with wounded classmate Olivia (Sarah Gadon), an attractive and intelligent student who proves herself to be at least his equal in both damage and ability. Their relationship casts a spell of its own with certain consequences and it affords Indignation a beautiful framework which will stir the emotions of every lonely idealist. Schamus grasps this in Roth’s themes in the best way since Robert Benton masterfully adapted The Human Stain in 2003.

“Practice tact,” Olivia tells Marcus in a line which foreshadows the thematically pivotal plot twist to come. The youth marked by everyone from his mother (outstanding Linda Emond in a career best performance) to the dean (Tracy Letts) as smart, clever and promising must learn for himself the cost of choosing to become indignant at the unjust state of the world. Indignation doesn’t fill in every gap, and it falls short of fulfilling a potentially poignant counterpoint to the old hackneyed line about the atheist in the foxhole. But it is a rare depiction of what happens when a young man of the mind in mid-century, Midwestern America makes crucial choices that make all the difference.