Movie Review: If I Were You 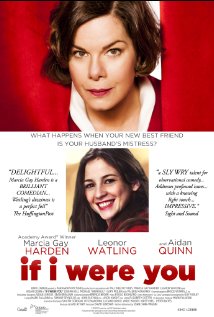 I recently had the pleasure of seeing an independent dark comedy starring Marcia Gay Harden (The Hoax) called If I Were You. Harden’s is a marvelous performance in its range alone and, while it is not quite the breezy light comedy its tagline – “what happens when your new best friend is your husband’s mistress” – implies, the picture evokes at its best those life-affirming, secular humanist films of recent years such as Dan in Real Life and Hope Springs.

There is a downside. If I Were You covers too much ground, and some of it is covered too heavily, such as the lead character Madelyn’s (Harden) escalating dependence on alcohol to alleviate her pain after discovering that her husband (Joseph Kell) is having an affair. The drinking problem is played for laughs as a gimmick and it’s drilled so often you expect Red Skelton to wobble in with a hiccup. The writer-director responsible for creating this curiously involving film, Joan Carr-Wiggin (A Previous Engagement), has something interesting to say about alcoholism – that it can be terminated – but the point is lost.

Soon we meet Lucy (Leonor Watling), the object of the wandering husband’s affections, whose own precarious state presents Madelyn with an apparently irresistible opportunity for revenge. The dim, younger actress, on the verge of suicide when we meet her – because Madelyn’s husband suspects that his wife has caught on and rejects Lucy, too – throws herself so completely at the mercy of droll Madelyn that Madelyn can’t resist and, presto, Madelyn’s mid-life shellshock aligns with Lucy’s innocent search for affirmation. The two women, remarkably yet plausibly, become friends. There’s more to it, of course, and half the fun is watching Madelyn trade advice with Lucy; their pact is the picture’s point that trading is mutually advantageous.

Cleverly playing the unresolved issue of who’ll end up with the husband into a production of William Shakespeare’s King Lear, If I Were You is neither farce nor drama. Too many characters, subplots and scenes make it uneven as a friendship story or, for that matter, as the tale of a wife and businesswoman claiming ownership of her life.But, thanks to Marcia Gay Harden’s fine performance, it is earned. There’s also a carefully threaded life-death dichotomy dramatized through a supporting role of a stranger played by Aidan Quinn (Desperately Seeking Susan, An Early Frost) whose magnetism is essential to the movie’s upward lift. Death is examined in a cutting memorial service scene that any survivor with a brain will understand, in a refreshing walk through the snow, and finally as a legitimate catalyst for improving one’s life.

The stranger’s presence grants Madelyn a contrast – and a choice – as the curtain comes down on her charade. Most people keep secrets, get depressed and feel vulnerable sometimes, especially these days. The overloaded If I Were You shows two people that, no matter how different, have the capacity to trade places as a way to discover – and re-discover – that life gets better when self-interest comes first. Few movies deal capably with serious issues. Despite its flaws, and with pathos, humor and a wink at the world, If I Were You does.