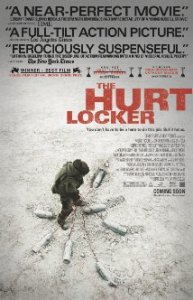 ‘War is a drug’ is the tagline for Kathryn Bigelow’s The Hurt Locker (2009), not an especially thought-provoking or original variation on the notion that war is hell.

But war is an intoxicating hell by most accounts and this should be re-dramatized often as the West is chronically plunged, or plundered, as the case may be, into a state of perpetual war. This perceptually-driven picture begins with a slow-motion explosion in the opening scene, which demonstrates the utter futility of an American deployment in Iraq in 2004. The movie takes place in Baghdad, a city positioned to fall into Islamic fundamentalist hands 10 years after Bush’s folly.

Time is marked by the bomb squad soldiers, or sacrificial animals, by days left in rotation. A crippled cat hobbles across the street as the viewer experiences immersion in a sensory perceptual experience of the American soldier deployed in Iraq. The viewer’s sense is a feeling of what it’s like to be in a constant state of half-paralysis for a mission to die for the sake of helping others. It is a feeling, however, not an examination of a failed war which advanced enemy aims in the aftermath of the 2001 Islamist act of war on America.

The Hurt Locker is agnostic about the long war in Iraq, which sacrificed thousands of Americans and created further chaos and confusion in the Middle East. The movie shows what it looks and feels like to lock and unlock pain in a state of chronic non-combat with unbearable tension. By slowly following the soldier’s aimless thoughts and steps, complete with tedium, the movie reduces the U.S. soldier’s deployment in today’s politically correct field operations to its mental essence: crazymaking.

For instance, the first scenes culminate in a sniper attack in more slow motion. Picture spent shells, flies on eyelashes, flies on faces and Iraqi desert dust devils. After the attack subsides, soldier Sanborn (Anthony Mackie) asks soldier Will (Jeremy Renner), upon finding a photograph of his son: “You married?”

Stoic Will has an answer and it defines the film’s thesis that blood is the only thing worth fighting for. “Well, you know, I had a girlfriend,” he tells soldier Sanborn. “She got pregnant. So we got married. Then we got divorced. But she still lives with me and she says we’re still together, so I don’t know. What does that make her? I don’t know.” Confusion and chaos on the outside stir confusion and chaos on the inside. Soon, Sanborn, who confesses that he’s not ready to have a child, bonds with Will. After they tussle, Sanborn asks Will if he thinks he’s ready to put on the bomb suit. A softer soldier (Brian Geraghty) is part of the team, making it three. The dynamic is set.

Then, it’s 16 days later in their rotation, so The Hurt Locker for its reputation of realism really only offers a selective re-creation of grave and immediate dangers faced by the bomb squad. After more bonding, specifically Will with an Arab boy, and long bits in the blinding sun, Will comes upon a gruesome scene which unlocks, or locks, more pain, an attack in Baghdad’s so-called green zone – a designated safety area for Westerners – erupts. Affected Will takes the trio on a rogue mission, raising stakes and pitting childless Sanborn against alpha family man Will.

Who’s a better soldier, who’s a better man? Does it matter? Is any value at stake? Is everyone doomed to chaos, confusion and death?

“I don’t even have a son,” submits soldier Sanborn, after an Islamic suicide bomber claiming he wants the bomb disabled because he really wants to live – because he has four children – is resolved. A second later, upon seeing a kite flying, Sanborn stutters, “I guess I don’t think about it…I don’t know why.” He finally asks Will: “Do you know why?” Will answers: “No, I don’t.” This uncertainty contaminates Will, who returns from his rotation to the U.S. alive but not necessarily living. Standing in an empty grocery store, surrounded by choices of cereal, he indiscriminately chooses a box and throws it into the grocery basket. Then, he’s cleaning gutters. He doesn’t know why he has a kid, he doesn’t know why he risks leaving the kid fatherless. The Hurt Locker‘s clock resets with a lone bomb tech walking down an Arab street. The death cycle repeats in slow, dusty neverending beige.

Is The Hurt Locker a lesson in bloodlust? Does war make man lust for blood or does man make war into bloodlust? In few words (for clarity, watch with the subtitles on) and a spate of slow-moving pictures of man mired in the inaction and indecision of today’s mindless war, which means waiting to be blown apart for the sake of nothing, The Hurt Locker approximates the approximated, unending war of our times.

Bigelow says on the extras that she hopes to replicate the chaos of war, though it’s worth noting that the picture’s close-ups and slow-motion scenes – crew refer to ninja cameras – do not really re-create reality as much as slow it down selectively to make the engagements and non-engagements seem hyper-realistic. It’s a 12 minute feature, so if you experienced the war in Iraq or want to see and study The Hurt Locker, don’t expect much from the bonus bits. An audio commentary in which Bigelow comes across as somewhat pretentious at least does disclose that the film’s military scenes are not accurate. The movie won the Oscar for 2009’s Best Picture.