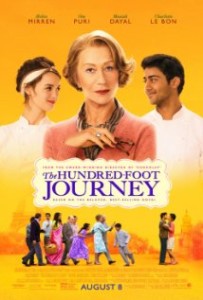 14 years after his triumphant Chocolat, Lasse Hallström returns to France for another delightful movie, this one themed with what the world needs now, harmony, and seasoned with lessons in aspiring to and achieving it. (Click on the image to buy the Blu-Ray).

Savoring every moment is the central theme of this brilliant and terribly underrated motion picture, co-produced by Juliet Blake with Steven Spielberg and Oprah Winfrey, in their first creative collaboration since The Color Purple (1985), made by DreamWorks and distributed by Disney. The credit goes chiefly to director Lasse Hallström, a masterful storyteller in every sense whose films—An Unfinished Life, What’s Eating Gilbert Grape, My Life as a Dog, Casanova, The Cider House Rules, The Shipping News—are evocative and exceptional in both lightness and importance.

The Hundred-Foot Journey, based upon the book by Richard Morais with an adaptation by Steven Wright, is his grandest achievement. What superficially might be misconstrued as a tale of food, racism and multiculturalism is at root a story of starting over, trading values and the wonder that man, to paraphrase Ayn Rand, is a being of self-made soul. Indeed, most of the Objectivist virtues are contained herewith: pride, productiveness, honesty, integrity, rationality…and the whole story, arcing from a village in India to a village in France, begins in earnest with a wise old moneymaker in a trading place singling out an individual child and conferring upon him the status of “the boy who knows”. His name is Hassan (Manish Dayal as an adult) and how he integrates what he knows with what he remembers is unfurled in slow, sensuous loops.

What he knows is that food gives life. He learned this from his mother, a strong and mysterious woman who is killed in an act of arson (ignited by indeterminate political furor). Hassan the chef watches and learns, taking culinary skills from his mother’s recipes, as his family, led by Papa (Om Puri) hops from across Europe until the family’s minibus brakes fail on a hillside in France. Papa is headstrong, bent on tradition, and his struggle with Hassan is subtle, which allows The Hundred-Foot Journey to make multiple passages and back in a revolving, circular story. Though never explicit, and Mr. Hallström may not have had this intention, Papa takes knowledge on faith—faith in traditionalism—while his son Hassan thirsts for knowledge, has ambition and he goes by reason. What they share, spiritual belief in the memory of Hassan’s mother, bridges the distance.

This is not a father-son tale and soon the beguiling chef Marguerite (Charlotte Le Bon), who rescues the stranded Indian family and takes them in, and her boss, starch Madame Mallory (Helen Mirren), are at the forefront of an intercultural conflict between patriarch and matriarch. When incorrigible Papa insists upon buying the property across from Madame’s Michelin-rated restaurant, the cooking contest is on. As Marguerite and Hassan fall in love, the French cuisine-snob Madame exploits regulations to shut down the new, Indian-flavored competition and the gruff father retaliates, playing exotic music and garish decorations to the hilt. The local farmer’s market is their battleground and, as the war ensues, things take a sinister turn when another traditionalist turns the fierce but amicable contest into something ugly.

Out of this difficulty lies opportunity, to paraphrase Albert Einstein, and Mirren’s Madame Mallory checks her premises, coming down on the side of chef Hassan, who is bloodied but unbowed and still pining for Marguerite. The mother-son mythology does another revolution, as so many life events, mistakes and twists do in The Hundred-Foot Journey, and again the prodigy earns a vaunted status by a wise old market master: “Arrogance,” the Frenchwoman exhorts in a combination of shock, thrill and admiration. Hassan accepts a new assignment to earn a just desert as he strives to earn a hand in partnership from Marguerite, who demands to be treated as an equal. All of this unfolds gently, with humor and with secondary characters, including the mayor and other villagers, stopping to appreciate rich, exotic and exquisite food.

Food is memory, the story’s mythology goes, shorthand for living in the moment as time passes and relationships change. Hassan goes to Paris in a third act that alters but expands the journey, as focus shifts to innovation in what amounts to an exciting and technological food laboratory, where scientists and chefs try, experiment and prepare the best of everything in a top notch studio. What to eat is elevated to an art and production is decidedly commercial, so, as he ascends, Hassan may yet master the art of commercialism. But what will become of those left behind? What happens to his family, his mentor and his memory? Will the legacy be lost when food is prepared to make money?

All is answered and brilliantly so without compromise in art or commerce. With an accent on exchanging values and the true meaning of partnership, including reciprocity in the deepest sense, The Hundred-Foot Journey, which accounts for the length between two worlds on a little road dividing two cultures, cuisines and locations—measuring the distance to reach one’s goal to love, to cook, to trade, to garnish, eat and dance—commences once again. It is done with deftness in depicting how people resist change even when it’s for the good, which underscores that acting in one’s self-interest, the virtue of selfishness, is the highest and hardest part of life. With androgynous, young lovers and obstinate elders, in mouth-watering scenes of Indian and French food, the fusion of an old-fashioned melting pot takes place. Lasse Hallström’s sauces and spices along dirt roads by a chateau near a village outside of Parisian lights are as magical as anything he’s made. Harmony hits the spot.

Four short features are entertaining, though the disc’s treat is the colorful, bursting movie itself. A general feature with most of the principals, including Mr. Hallström, Om Puri, Manish Dayal, Helen Mirren and others in the cast is 15 minutes and it’s very good at deconstructing the film’s storybook aspects. This feature is best viewed after the movie. An eight-minute segment with Steven Spielberg and Oprah Winfrey is the most interesting because Ms. Winfrey is so clearly uncomfortable sitting next to Mr. Spielberg as they discuss the film. It’s soon clear why as Steven Spielberg obviously gets that the movie is about human harmony—he makes a point to credit and discuss Lasse Hallström—whereas Oprah thinks it’s all about food. The Hundred-Foot Journey is their first artistic collaboration since The Color Purple in 1985. A feature on cooking cocoanut chicken is well done. “On Set with Oprah Winfrey” is as pretentious as its sounds. The Blu-Ray edition, which does not include a commentary track, is (chiefly for the movie) an excellent value. (Click on the image to buy the Blu-Ray).