Movie Review: How to Be Single 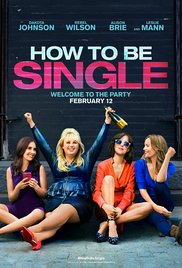 In the spirit of Warner Bros. romantic comedies such as He’s Just Not That Into You and confectionary treats such as Valentine’s Day, along comes Warner Bros.’ How to Be Single, modifying the formulaic approach for the cruder-female type ala Bridesmaids. It’s mostly a female wish fulfillment puff piece, set in the sort of fantasized New York City where young people magically have money to spend going out getting blitzed and renting fabulous apartments. Besides wincingly obvious and poorly executed product placement, some awful lines and subplots and another irritating high-pitched performance by Leslie Mann implausibly as a doctor, How to Be Single improbably has merit.

Johnson pauses, ponders and takes her time to think about what this confused young woman would do and it elevates the material, which has glimpses of a better movie. In one climactic scene, she’s blindsided by her gal pal (Rebel Wilson) and finds herself among three men with whom she’s had complicated relationships—as complicated as this attention deficit film allows—and she goes out on the fire escape to think things over. In another, she crawls into bed in her sunlit apartment to tend to herself as she begins to figure out what being single really means. She also hooks up, makes mistakes and does what young people do, especially these days, when everything for today’s youth happens too fast and with too little substance, meaning or proper consideration.

Enter Wilson’s loud, salty and raucous friend, the stereotypically large-sized comic female prone to such wisdom as defining one’s values by alcoholic beverage consumption—and all of these young characters as depicted would be on their way to becoming alcoholics—and having indiscriminate sex. She also advises Alice about how to tease men via text messaging: “Do not respond in full sentences.” Another female character (that should have been cut from the picture to make room for thematic development) basically admits to being a freeloading squatter at a busy bar just for the free wifi. When called out, she threatens the bartender. Sadly, she’s intended to be irresistible.

The men are pushovers as usual for this type of movie, not that this isn’t true to life among today’s emasculated young single men who seem to expect to be pushed around. There’s the stereotypical bartender that gets served his own mixture. An entrepreneurial property developer with a kid adds dimension and at least the businessman is not a villain for a change.

But it’s the women’s movie, with shallow characters except for what Johnson adds to her New York woman, and they alternate between rude and crude and decent and kind. Mann’s physician is Alice’s sister, for instance, and at some point she decides to have a baby without having a husband or boyfriend. When she finds one (Jake Lacy, Carol), she publicly humiliates him with an outburst. How to Be Single has it that she’s been done the wrongdoing. The constant cutting is distracting.

Johnson keeps it interesting. Wrapping up toward an optimistic ending, Johnson’s Alice learns to master independence and reads Sylvia Plath’s The Bell Jar. Had the multiple screenwriters cut or reduced Mann’s sister and the annoying barfly character to give Alice screen time to grow and decide, How to Be Single‘s theme that embracing being alone is crucial to being in love might have been the perfect gift to oneself for Valentine’s Day.