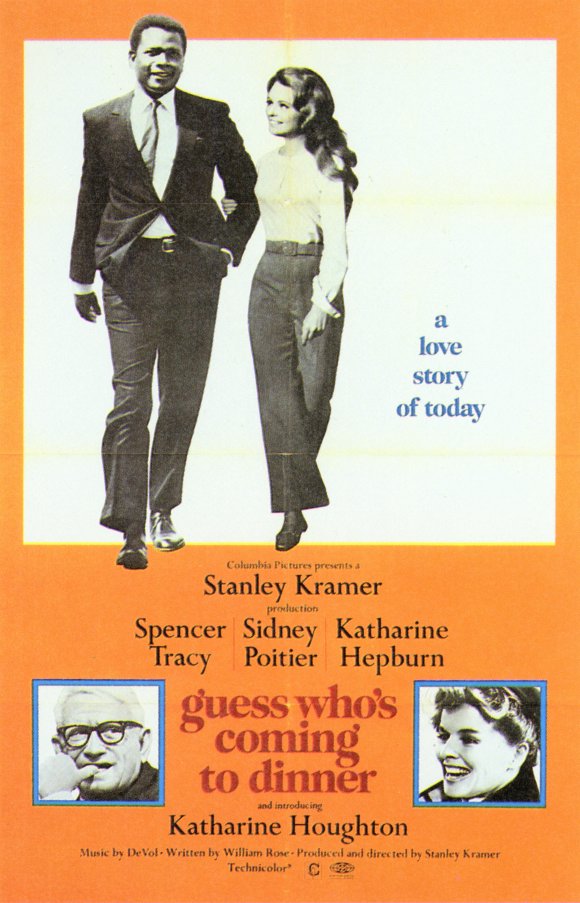 Though I’ve seen Stanley Kramer’s 1967 motion picture Guess Who’s Coming to Dinner several times, last week was the first time I saw it in a movie theater. Seeing this historic movie with an audience in Hollywood, courtesy of TCM Classic Film Festival 2016 (read my postscript on the introduction after this review and more about the festival here), with contextualization by a leading cast member and a film scholar, gives me deeper appreciation for this bright, intelligent and colorful movie. Its us against the world/to hell with what others think idealism is embedded, radical and wholly embraced by the audience nearly 50 years after its debut.

Despite its detractors, and there are many, especially on the left, Guess Who’s Coming to Dinner remains extremely powerful, if sometimes static. Spencer Tracy—who died days after the picture’s final production—and Katharine Hepburn co-starred for the ninth and last time opposite Sidney Poitier and Katharine Houghton as the interracial couple. The Tracy-Hepburn pairing persists as the credited cause for the picture’s impact yet I found that this adds, but does not fully power, Guess Who’s Coming to Dinner.

As a Bay Area couple whose professed liberal values are tested when their daughter (Hepburn’s niece Katharine Houghton) announces her engagement to a black doctor (Poitier), Tracy and Hepburn are indelibly cast and give emotional authenticity to the film particularly its famous final scene. The screenplay, too, by William Rose, who won an Academy Award for his work, is excellent, which unfortunately if not surprisingly is often ignored when the movie’s discussed.

Of course, producer and director Kramer, whose adaptations of Nevil Shute’s post-apocalyptic novel On the Beach and the Scopes monkey trial play Inherit the Wind, as well as Ship of Fools, It’s a Mad, Mad, Mad, Mad World and Judgment at Nuremberg, and lesser known movies such as Oklahoma Crude with Faye Dunaway and The Secret of Santa Vittoria with Anthony Quinn, make compelling cinema of serious and challenging themes, deserves top credit.

But one line, expertly delivered by the great Sidney Poitier—“I fell in love with your daughter”—who mastered the year in movies with outstanding performances in In the Heat of the Night and To Sir, with Love, fundamentally makes the movie credible. Poitier’s line is neither delivered in defiance nor in apology; it is a clarification brimming with joy and spoken in solidarity with a father as his equal. At every point in this groundbreaking film, from his flirting with a black woman to his response to servant Tillie (Isabell Sanford), who judges him solely by his race, Poitier’s John Prentice acts on his own judgment for his own benefit; he is the title’s who that drives the plot’s progression.

With non-verbal cues, such as picking through a sandwich as if looking for signs of sabotage after Tillie serves refreshments on the terrace, Poitier’s Dr. Prentice personifies the rational man. When Dr. Prentice speaks, he maintains his virtues, whether setting his terms with his fiancee’s parents, responding with tact during cocktails with her friends or erupting with fury at his father (Roy E. Glenn, Sr.) when he decides to declare his break with tradition. Most of this happens at the San Francisco home of his fiancee’s parents, newspaper publisher Matt (Tracy) and small business owner Christina (Hepburn) Drayton.

Their daughter’s proposition is for her parents to bless this interracial union before the couple leaves to get married, which is to happen imminently, so there isn’t time to deliberate about a marriage which, in 1967, was illegal in almost half the country. Besides Sanford’s outspoken Tillie, with whom the audience identifies up to a point for her work ethic, protectiveness and suspicion of the black separatist movement, several other characters participate in the pre-dinner affair, including a Catholic priest (Cecil Kellaway) who is friends with Mr. and Mrs. Drayton and Hilary (Virginia Christine), a parasite who works for Mrs. Drayton.

Yet Guess Who’s Coming to Dinner begins at the airport, where Rose and Kramer cue the simple love theme, set the movie’s steady pace and establish that the world changes and one must stay on the move.

The black and white couple descend an escalator with a gathering of happy children, representing youth and the future, and take a taxi—where they exchange an interracial kiss, to the astonishment of the blue-eyed cab driver—to Mrs. Drayton’s downtown art gallery, where they encounter leech-like Hilary and her modernist contraption. Along the way, Dr. Prentice learns that Mrs. Drayton is an entrepreneur and that her daughter is proud of it. Then, they arrive to meet the parents. A foghorn sounds in San Francisco Bay, signalling trouble ahead.

The agitator is Joanna “Joey” Drayton (Katharine Houghton in her flawless movie debut), an idealistic white woman who meets the handsome black doctor on a trip to Hawaii and instantly falls in love.

Guess Who’s Coming to Dinner seasons the conflict, with an occasionally artificial air and its own archaic notions, such as Dr. Prentice’s line about a marriage being for the purpose of procreation. From Hepburn’s equalizing command more than question—”Can’t we all sit down?”—to the establishing shot of Matt Drayton’s study with its books and photograph of Franklin Roosevelt, every turn is seeded, earned and dramatized. Whatever makes it seem dated, such as the interracial dance scene between “knockout” Dorothy and the go-go delivery boy, Monsignor Ryan quoting the Beatles or Matt Drayton’s disastrous attempt to prove himself to be a thoroughly modern man eating boysenberry ice cream, which permits the movie to simultaneously acknowledge the “angry black man” and the “angry white man”, adds up to the climactic final speech and dinnertime.

This includes the appearance of Dr. Prentice’s parents, a decent couple from Los Angeles visiting snooty San Francisco (where their would-be daughter-in-law looks down upon a girl from Pomona). Bringing the earlier taxi scene full circle, his mother (Oscar-nominated Beah Richards) and father silently ride in the backseat as Joanna Drayton drives, with Mr. Prentice looking angrily at the white woman and with Mrs. Prentice looking admiringly at her son, the widower who lost a child, is ready to love again and marry on his own terms as his own man. It’s a powerful contrast which precedes Poitier’s later emotional outburst to his character’s father that he thinks of himself as a man, not as a “colored” man.

That the meaning of this line has been flipped and reversed today—with the father’s notion that one’s identity is based upon race sadly closer to predominant ideals about race among today’s black intellectuals, who proclaim themselves “persons of color”—and Poitier’s Dr. Prentice would likely be branded an unenlightened “Uncle Tom” (which is what Poitier was branded by a black newspaper columnist after his banner year) only serves the movie’s theme that love is colorblind, which, in reality, is true. So, too, is the picture’s optimistic forecast about an American Negro becoming president of the United States of America.

Guess Who’s Coming to Dinner is no less probing and powerful, if neatly arranged and produced, a picture show now as it was then. Almost every scene stands out as important. It is sharp, biting and proud—and, ominously, still radical in its comic and dramatic case against collectivism.

Movie historian Donald Bogle brought out co-star and stage actress Katharine Houghton at TCM Classic Film Festival 2016‘s screening of Guess Who’s Coming to Dinner at the Chinese Theater 6 in Hollywood and the two exchanged a brief question and answer about the historic film. Houghton said that she was constantly on hold because the Columbia Pictures production was on, then off, then on again, and she explained that Columbia did not want to make the movie, which the studio apparently did not know was about interracial love during development, for fear of the audience’s negative response. Though Bogle and Houghton had the effect of apologizing for Guess Who’s Coming to Dinner by indicating that it was made for white audiences, her enthusiasm for the film’s theme that love is universal remains in her interview and performance.