Mahershala Ali (Moonlight, Hidden Figures) and Viggo Mortensen (A Most Violent Year, Hidalgo) deliver the year’s best cinematic performances as a duo in the unerringly precise, refined and rational Green Book. This outstanding picture, one of 2018’s best three movies with Won’t You Be My Neighbor? and Love, Simon, pierces today’s worst and most damaging illusions.

The first third of Green Book focuses on one man, whose name is Tony (Mortensen). He’s a hardworking bouncer from the Bronx with a shady past, rough exterior and a wife and kids at home.

The year is 1962. As with all of these naturalistic movies, context is crucial.

The context of the early Sixties, before the darkness of the late Sixties looms (with one, brief shining moment of man’s greatness in 1969), permeates the movie in subtle ways. Race, sex and class emerge in various scenes as factors for Tony; who he is and who he chooses to be. As a worker, he struggles to make ends meet. As someone who happens to be white, Tony is also by choice ignorant, prejudiced and partially racist.

Working among cigarette girls, gangsters and mostly people just like him, which is to say people within an extremely insular ethnic subculture (he’s of Italian ancestry), Tony disdains the Negro workers his wife welcomes into their home. He doesn’t question why — and how many Kent cigarettes — he smokes. He doesn’t challenge a Catholic prayer before dinner, let alone the heavy deployment of religious paraphernalia, from crucifix to church calendar, in his home. He doesn’t doubt the constant speaking of a foreign language in his home — and in the presence of his children — either. Tony is a byproduct of his chosen means and ways, prejudices and traditions; he is 100 percent submissive to the status quo.

As a man, however, and this is why Green Book — like Won’t You Be My Neighbor? and Love, Simon — is (very much against the predominant feminist trend) a movie about what being a man means, Tony wants to improve. He may choose to dispense with glass specimens because they are tainted in his deformed mind by Negroes. But he also chose as his lifelong mate a woman who corrects his mistakes and scorns her husband’s ignorance.

Enter a man who lives above a grand and enlightened place, as the movie demonstrates, “created by Andrew Carnegie.” 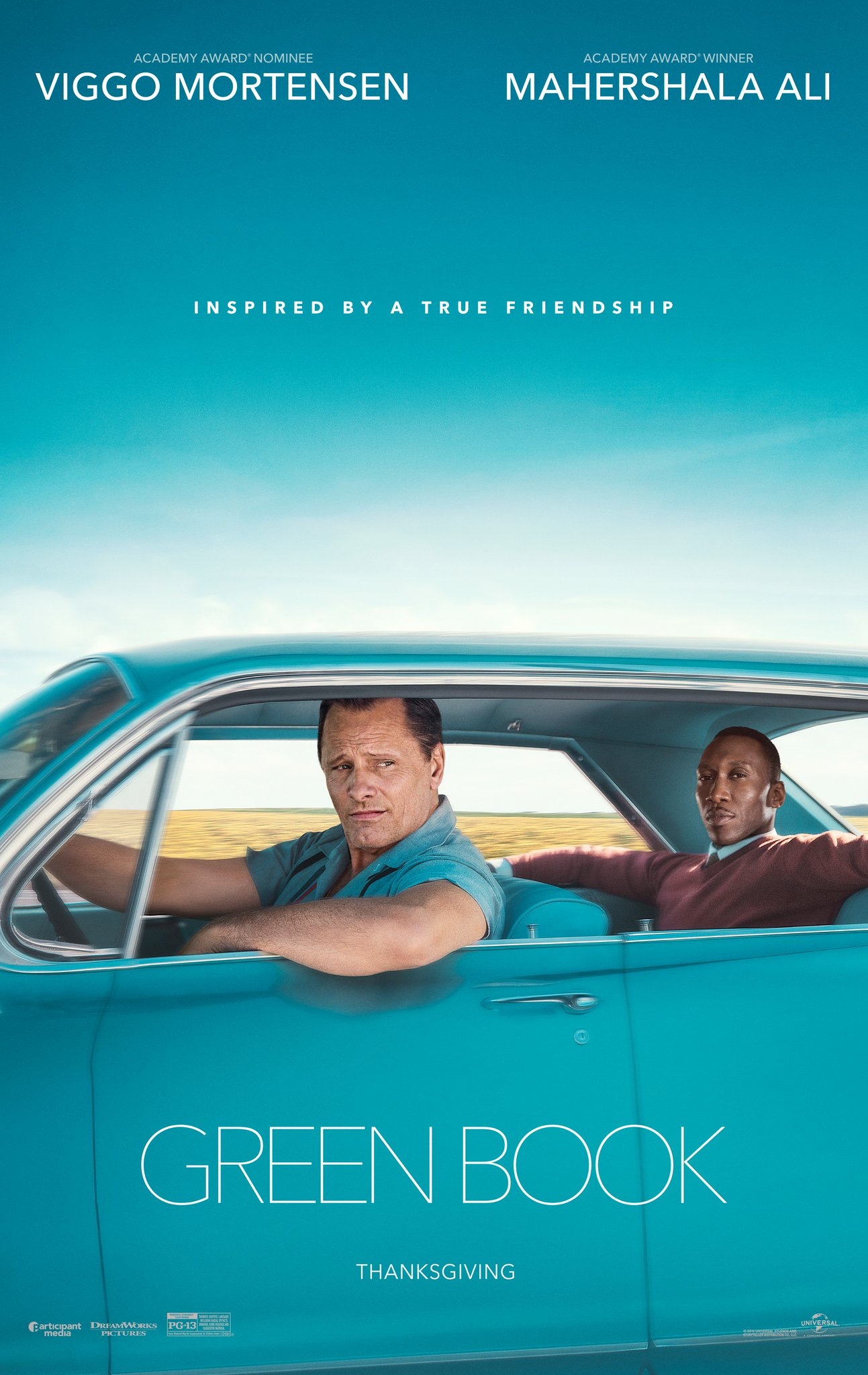 In this new and worldly home, where muscled Tony’s solid bouncer reputation yields the reason he’s there for a job prospect not to be taken on faith, Tony meets the first man to actively engage and challenge his mind. This man, Don Shirley, portrayed by Ali in another superior performance, is uncompromising in applying his high standards. Don Shirley asks Tony what he does for a living and, when Tony gives the stock answer, ups the ante with: “In what capacity?”

That Tony steals a pen on the way out of the wealthy Negro musician’s exotic, lavish home suggests that the job he’s seeking — bodyguard and driver to the artist and his band as they tour the American South — may itself pose a character challenge. Mortensen is excellent in the role.

But his performance is matched by Ali’s, which is the more restrained performance. What begins to bridge the gap as the pair travel in one car (with bandmates in another) from Pittsburgh to Ohio and Indiana, where, predictably if you’ve been there, outward signs of racism start showing. Things worsen in Kentucky. They get worse down South.

So why go there?

For the same reasons Don Shirley did, which become clear as Green Book turns its touring pages and chugs along, driving deeper and deeper into the belly of the beast. Through it all, the focal point for Tony is that his boss hired him for his ability, not merely for his muscles. This is new for Tony. Also new is that his new two-month boss does so as a trade — not as a favor, an Italian blood tie or an act of intimidation. The mob muscle, whose financial trouble leads him into a pawn shop, comes to expect something of himself, for a change. As he does, he realizes, as Tony puts it: “Geniuses think.”

The smallest scenes and subtleties of Green Book diverge and converge in fresh and surprising turns and twists. Multilingual Mr. Shirley, whom Tony favorably reports to his wife is as good as Liberace, instructs and tutors his newest and roughest employee.

But he performs on his own terms. Insisting on playing piano on the Steinway brand, with a bottle of whiskey in his room every night, Ali’s Don Shirley is cultured, dark, reserved, remote and mysterious. Like any sophisticated black man (arguably, then and now), Don Shirley gains a sense of mission and empowerment from his burgeoning relationship with the ignorant thug from the Bronx. By the time he plays “Happy Talk” from Rodgers & Hammerstein’s South Pacific, an interestingly, thematically infused song for Green Book, his overdrinking and Tony’s oversmoking overlap for the stuff of a real, complex and combustible friendship.

Co-writer and director Peter Farrelly (Dumb and Dumber, There’s Something About Mary) has a knack for comedy. This is apparent. But this is not what powers Green Book and, notably, the comedy sometimes gets in the way of the film’s best moments. What Farrelly does best is provide the script, cast and photography with an ideal canvas. For example, in one scene, field workers gape in wonder at the black man who emerges from a car being serviced by a white manservant.

The astonished Negroes in the field mark a key and swift transition that unfolds into an emotionally powerful disclosure about Don Shirley. It comes after a visit to Stuckey’s, another act of persecution in Georgia and Tony rambling (as Tony tends to do) about Willie Mays and Joe DiMaggio. It comes before references to composers Liszt, Brahms and Chopin, Attorney General Robert Kennedy and Christmastime in Alabama and the plot pivot makes a salient point within an already sharp point about the invisibility of man’s sexuality; how people tend to see too narrowly what they wish to see.

With a vodka toast over the legacy of Nat King Cole, courage and incontrovertible either-or of moral choices, Green Book culminates in a two-factor authentication of each man’s pride in his work and the virtue of productiveness. With classical piano, jazz, rock, pop and blues, snow storms, guns, fists and a Christmas miracle, Green Book (executive produced by Ali’s Hidden Figures co-star actress Octavia Spencer) closes with a scene which captures the benevolence of Christmas, making this the perfect Thanksgiving movie. Like Won’t You Be My Neighbor? and Love, Simon, Green Book, co-starring Linda Cardellini (Brokeback Mountain, Avengers: Age of Ultron) as Tony’s wife, renders a stirring depiction of the reward of being the rational man and the loneliness of being ahead of one’s time.