Comedienne Lily Tomlin gets a vehicle she deserves in Grandma, a layered character study about what makes an angry, old lesbian. The dry, day-in-the-life comedy peels away politics and political correctness to depict an original and untold story. It’s small in scope but not small-minded and, with an unwanted pregnancy and an abortion at stake, the movie for Sony Pictures Classics by writer and director Paul Weitz (Little Fockers, About a Boy, Admission), is remarkably radical in under 90 minutes.

Ms. Tomlin plays Elle, an aging feminist poet and writer living in what could be Silver Lake or some other grungy Los Angeles neighborhood. She’s an embittered academic who lashes out at her partner Olivia (Judy Greer) in an abrupt eruption of anger that’s obviously defensive. Deep down, she’s human, and, while Weitz describes the movie as his tribute to feminism (in an opening night Hollywood interview), Grandma‘s more of the same secular humanism for which he’s become known. Granddaughter (Julia Garner) shows up at the doorstep with an unwanted pregnancy after the meltdown, granting Grandma a reason to revisit the past to forge a new beginning.

Central to the plot is the teenager’s goal to get an abortion, which is perfectly dramatized without the rancor of politics and religion. Reducing controversial issues to a human scale in personal terms related to each character, Weitz leaves just enough unsaid and undone to add depth to Grandma and those she encounters, rouses, jostles, hustles and locks lips and horns with along the way, from the butch cafe lesbian (the late Elizabeth Pena) and an ex-husband (Sam Elliott) to her own daughter, the teen’s mother, played by Marcia Gay Harden (Path to Paradise, The Hoax, If I Were You) who gets better in every role and delivers another outstanding performance. Almost everyone is excellent in this movie, from Greer (Dawn off the Planet of the Apes, The Descendants) as the hurt lesbian lover and Elliott (Ghost Rider, Mask, The Incredible Hulk) as the hurt heterosexual lover to Garner as the conflicted granddaughter, glimmering turns by every minor role actor and Judy Geeson (Brannigan, To Sir, With Love) in a cameo.

But Grandma belongs to Lily Tomlin. The character actress and comedienne, who broke out on NBC’s Laugh-In as Ernestine the telephone operator and has had an enduring stage and screen career in hits such as Big Business with Bette Midler, has never had the fullest career to match her talent. She’s hilarious here and there in All of Me and The Incredible Shrinking Woman with her blend of physical and intellectual comedy, and even with her leftist, anti-business bent, Ms. Tomlin usually entertains as an everywoman. In Grandma, Weitz keeps her to a steadily rhythmic clip, coasting through references to Betty Friedan and whatever comes from her character’s Tourette’s-like propensity to say whatever comes to mind to poignant moments of repose when her bitter poet Elle must face the consequences of her life choices. Lily Tomlin is a woman in whole here, fully intelligent, prickly, principled, abrasive, maternal and sexual. The neatly segmented Grandma, in which an old motor vehicle serves as transportation for and symbolic of an old motormouth, may be the role that suits her best. 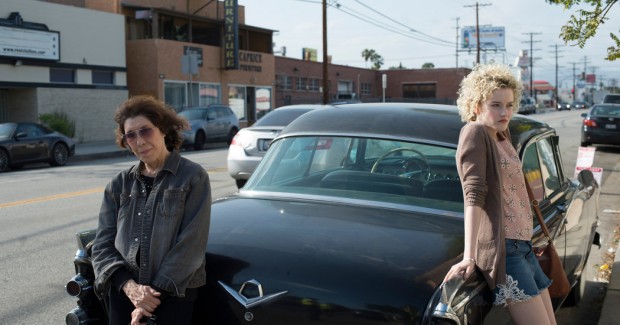 Grandma is a family affair, like Little Miss Sunshine (2006), though it’s less contrived and more subdued than that hilarious movie. Each of the three women (granddaughter, mother and grandma) have pivotal moments of self-awareness, consciously chosen realizations and admissions that add up to a strong, female-driven family in which the term bossy is far from banned. As this subtly, deftly made story against the Dark Ages arcs toward a single figure walking away alone, the theme of a woman as properly bossy is aptly understood, even by the child-woman who mistakes Betty Friedan’s The Feminine Mystique for a comic book character.

In his appearance last night in Hollywood, Paul Weitz said that the impetus for this lowercase-titled picture comes from his time with Ms. Tomlin on his Tina Fey movie Admission. The perfect showcase for the talented Lily Tomlin, with its radical departure from and challenge to Hollywood’s appeasement of anti-life, anti-choice religionists, is the gentle, searching and intelligent result.