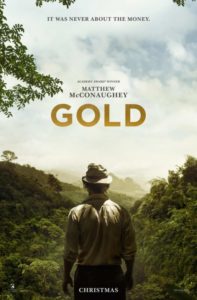 “We were a real business.” This line begins Gold starring Matthew McConaughey in an absorbing movie about getting what you want, preferably in gold. It’s an inviting opener that echoes that Stacy Keach-narrated cable show about cutthroat businessmen doing anything for a dollar (in fact, Keach (Truth) is in this movie, too). But it’s best to take this film (and that cable show) with a lot of doubt because, while the business depicted in Gold is rooted in something that’s real, the business was in Canada.

Where the incredible enterprise, known here as Washoe Mining, was located is distinctive to the plot of Gold. McConaughey’s speculator downs cigarettes with his Seagram’s and Pabst Blue Ribbon but he does it all in a quest to please and achieve the status of his dad (Craig T. Nelson), a larger than life businessman in Reno, Nevada, where the streets aren’t paved in gold but they’re named after McConaughey’s pap. As he did in similar roles in Mud and Dallas Buyer’s Club, McConaughey grasps, captures and expresses his spiraling character’s tension and nerve to find, mine and scheme to get rich. In fast cuts and rarely without McConaughey’s boozy sweat, paunch and crooked teeth in sight, Gold asks ‘where are we going?’ broadly brushing any hint of ‘why?’ when it comes to the ways and means of making money.

Except for his loyal, live-in barmaid (Bryce Dallas Howard) and a fellow speculator (perfectly cast Edgar Ramirez) in South Asia, nobody really thinks that McConaughey’s con man has the goods until they find out he’s struck it rich, after all, and this makes everyone suspect and puts McConaughey’s tobacco-stained, Iron Maiden t-shirt clad slob, who goes from dancin’ in a jungle to dancin’ in a bar, under a kind of halo. As the rollicking ride by credit card financing racks up miles on his Cadillac, tempting or taunting him with a golddigger, the feds, a tiger, malaria and a military takeover, for a few wild scenes it seems like the con man with a heart of gold might wind up, and deserve to end up, on top of the world. With a con man in the White House, a new take on the case of D.B. Cooper and fast-talking hustlers everywhere you go, this forewarning tale of due diligence delivers more of a nifty trick than the clever wink at giving believers what they might have coming, and it’s easy to pick Gold apart, but, like a seedier variation on The Sting (1973), it’s fun to watch the final play, even if what’s “inspired by true events” is ultimately overplayed.