I haven’t seen director Sebastián Lelio’s 2013 Chilean original, Gloria. But Gloria Bell, Lelio’s 2018 remake of his own movie, is strange and interesting on its own.

Gloria Bell is not a typical Hollywood movie. Screened at Hollywood’s ArcLight Cinemas with a director Q & A afterwards, I didn’t know what to expect other than what I had seen in the lively trailer and what the poster implies. 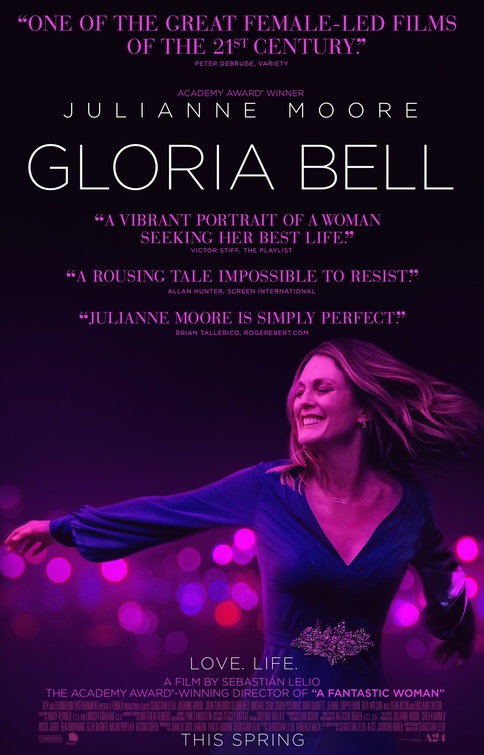 Gloria Bell is less jubilant than its advertising. With dark, strange and wordless scenes and interludes, the movie’s mostly pictorial. A hairless cat that’s a thousand times more involving than the cat in this weekend’s hit movie, the lifeless Captain Marvel, wanders in and out of the leading character’s life.

What Gloria says to the cat doesn’t amount to much as it’s more about what the cat represents. This is what Lelio (Disobedience), directing his own movie over again for leading actress Julianne Moore (Catching Fire), carefully threads throughout the remake. The result is uniquely unusual, comical and quietly satisfying.

Popping prescription drugs the audience never learns more about, smoking tobacco and marijuana and drinking every type of alcoholic beverage in almost every life context you can imagine, fiftyish Gloria’s more than a little exhausting. She clearly lives in her own world, ugly cat intrusions and all, while making ends meet in Southern California and going dancing at a disco frequented by people her age and up.

But don’t make the mistake I did if you choose to see this strange, contained little picture and think that Gloria Bell centers upon Gloria at the disco. It doesn’t and I almost wished it did. Instead, it’s about what draws her there.

Or, rather, Gloria Bell‘s about what she draws from within herself. This is not an easily accomplished task for the insurance claims agent nor is it an easily examined aspect. But what makes the movie sing to the extent it does (and this is neither like an opera nor an operetta) is its honesty about self-discovery through music.

Of course, this may explain why Gloria Bell comes off as cold and complicated, which mirrors the mysteries of music. From her solo sing-along to Olivia Newton-John’s hit single “A Little More Love” to tunes by Paul McCartney, Earth Wind & Fire and Air Supply’s pleading “All Out of Love”, the alternately self-caring, self-absorbed mother, ex-wife and daughter invests herself in favorite songs. Isn’t this true for anyone seeking a few minutes of romanticism or at least a dash of romantic love in sometimes lonely lives?

Gloria is far from sympathetic. Like most people, she can be painful to be around and she tries too hard. This is what sometimes makes Gloria Bell harder to watch, as it cuts close and doesn’t strive to make the audience laugh out loud, though that’s exactly what happens. She’s a bit of a lush, though she maintains control. She seeks too often to get stoned. She badgers and lays unearned guilt trips on her kids, driving one of them far, far away. Her family scenes are agonizing, dreary and pathetic.

When a man (John Turturro) she meets at the disco discloses that he’s had surgery to get thinner, she laughs at him. She’s so self-absorbed that she hijacks her son’s birthday party, humiliates her daughter and neglects her new main man. Honestly, it’s little wonder she ends up being terribly lonely in Las Vegas, even as Turturro’s ex-Marine entrepreneur wins her over and keeps at it.

But this small film about one lonely human’s discreetly epic quest to be alive, with pills, eye drops and, centrally, a self-made playlist through which she nourishes her sense of life, sneaks inside like that darn cat. It isn’t grand. It isn’t romantic and this is not likely to be your favorite movie this year. But, like Wild, Demolition and other strange slice of life pictures intended to make you think twice and ultimately go for broke, Gloria Bell makes you listen and look while it makes you think and feel.

In a scene toward the end, with a single, pregnant pause on the dance floor, Moore as Bell captures that moment when the consequences of life’s choices catch up — and the next moment when you choose not to let what matters go.

The ArcLight’s interview with director Sebastián Lelio was as lame as ever — USA Today‘s Claudia Puig seems like a nice person but she’s an inadequate and obsequious interviewer — but Lelio was able to express his thoughts on the film. He rightly describes Gloria Bell as a “mundane slice of life” while also sharing that he sought to differentiate each performance so that the audience feels like they’re watching people, not characters.

Mission accomplished as Michael Cera, Holland Taylor and others as Gloria Bell’s family are pitch perfect and so is the outstanding actor John Turturro who creates empathy, chemistry with Moore’s character and shock. Also look for Brad Garrett, Rita Wilson, Sean Astin in a cameo and Jeanne Tripplehorn. Lelio, who surprisingly made an excellent defense of casting regardless of pressure groups, strikes me as too tidy in his directing. But he shows real cinematic potential.

When I asked why he switched from the original movie’s setting, Santiago, Chile, to Southern California, he explained that it was Julianne Moore’s idea (she reportedly asked for the remake). Citing LA’s sense of isolation and a certain sensibility, Lelio said he agreed with Moore, who does some of her best acting.