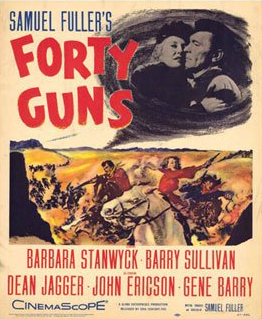 The raw, lusty, raging Forty Guns, written, produced and directed by Samuel Fuller, cuts across genres and landscapes to forge its own way. Like a strong cowboy, tough pioneer or good Western, Forty Guns, screened at LA’s Gene Autry Western Heritage Museum in Griffith Park with an introduction by Western movie scholar Andrew Patrick Nelson, comes out fast and hard and never lets up except where it ought to go easy.

Beginning with a great open range shot, finding a lone wagon in the foreground and letting loose a stampeding roar of hooves that envelops the wagon and its driver (Barry Sullivan), the audience sooner than later learns a lot about the wagonmaster, the land and the stampede.

The land is weathered and dusty and unforgiving—so is the rampage, which is also long and purposeful—and the wagon man is undaunted. In an outstanding single shot which foretells the showdown to come, the long line of galloping horsemen splits into two lines encircling the chipped, rickety wagon. As they do, the man holds on to the reins while his horses go into a wild rage as the stampede descends and he doesn’t let go. Sure and steady of hand and manner, he is the man to watch.

As the dust settles and the riders go off, fading the heart-racing opening sequence into a slow, distant thunder, and the opening credits roll with Harry Sukman’s thrilling musical score, the camera pans past forty gun-toting cowboys toward a lone figure in the lead—why, it’s a woman!—and there goes indomitable Barbara Stanwyck. 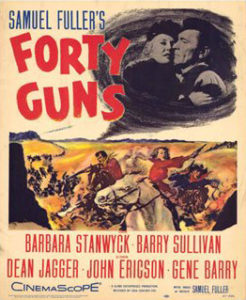 Then comes the town setup, with every detail factoring into the intricately mythical plot, from a child jumping rope and a stagecoach arrival to a lonely, beautiful woman making eyes at a new stranger in town. Part of the appeal of this raunchy 1957 movie is its cross-generational, cross-cultural contrasts and it’s nothing if it’s not about women’s liberated sexuality, the West and the man-woman relationship. Fuller introduces and embeds themes of aging, too, and other interesting subtexts.

But he leaves exposition to a balladeer (Jidge Carroll) who sings of a “High Ridin’ Woman” with a whip, one of several cheeky moments, and how she’s full of life and full of fire. This would be Stanwyck’s pre-Big Valley rancher and property owner, a matriarch lording over the area with her 40 dragoons. The woman’s name is Jessica Drummond—the balladeer calls her “the boss of Cochise County”—and when she’s not ordering men around and inspiring songwriters to croon at the bathhouse, she’s looking after her possessions and rationalizing the bullying actions of her much-younger brother Brockie (John Ericson). That brings Jessica Drummond into conflict with the wagonmaster she nearly ran down but didn’t.

His name is Griff Bonnell (Sullivan). He’s an avenger who’s come to town to exact justice with a criminal that works for Drummond, which he does, and he has his own score to settle. In scene after scene, the tension builds as Griff and Jessica stake their claims. Griff walks slowly by the town courthouse before coming up on Brockie and putting him in his place, underscoring that he aims to restore order and assert the role of a lawman in a wild country ruled by a hard, lonely woman. Brockie and his bunch are like hippies, Beatniks and hooligans, though, shooting up the town, destroying property and snuffing out lives. Griff has his helpers, two strong sons named Wes (Gene Barry) and Chico (Robert Dix), but he has long-range plans, too, including guiding his youngest son to a more civilized, businesslike life.

That won’t be easy with a wild woman on the loose, her unruly younger brother and a roost of half-men who let themselves be run into submission by Jessica Drummond. The sex kitten daughter of the gunsmith stirs, making moves toward Griff’s son Wes, the townfolk come to terms, noticing that Griff’s getting on in years and striding “a little slower” than usual and the Old traditionalist West comes into conflict with the New modern West with California as the ultimate ideal. With drunken, irrational Brockie uprooting the town while people decide who they are and what future they want, and Dean Jagger’s exasperated, cowardly sheriff—the quintessential moderate in the middle of the road—struggling to keep up with Griff, Forty Guns cooks up a mighty grand finale.

“Hyaaahhh!!” yells Stanwyck’s Jessica Drummond, riding across her range and finding herself drawn to Griff Bonnell because he openly mocks her and doesn’t back down and if these two sound like Roark and Dominique rustling up romance near the stone quarry in Ayn Rand’s The Fountainhead, that sounds about right. After he rejects her, she serves him whiskey, he downs it and she handles his gun like a pro. But Griff lets her know who’ll come out on top after she tells him she’s sure of herself.

“I’m sure you’re sure,” he says, and with that he’s done with her—for now. By the time the famous twister scene plays, with Jessica riding alone in the storm and being dragged by her horse and Griff riding alone in his wagon, the chords of “High Ridin’ Woman” come up and it’s not hard to see where these two ought to be.

Later, she tells him, “I need a strong man to carry out my orders.” His reply—”…and a weak man to take them”—once again foretells the outcome in a way, though not before tragedy strikes and the whole town, including rotten Brockie and his counterpart, boyish Chico, cashes in on their choices and calls the final contest between anarchy and civilization. With the Greek chorus-style balladeer chiming in on forgiveness, death and what it cost to settle the West—with California standing in for the American Dream—the high ridin’ woman, softly in reprise on piano, gets what she’s got coming with humor, pathos and a lot to say about family, legacy, sex and love, womanhood and manhood and, yes, how the West was won.

“I never knew how to like anybody until I learned how to love,” someone says when it matters. For all its lust, raunch and fun, Forty Guns fires up and shows everybody how it’s done.