Have you wanted something badly enough to be blinded by the wanting? This is the moral dilemma at the heart of Florence Foster Jenkins, the newest movie by director Stephen Frears (The Queen, Philomena, Mrs. Henderson Presents) about a matronly woman who bucks the status quo for her own private reasons of innermost agony. The humor is as broad, the delivery as dry and the showmanship as campy and bawdy as in his previous outings.

This time, however, the woman’s life is itself more centrally at stake. 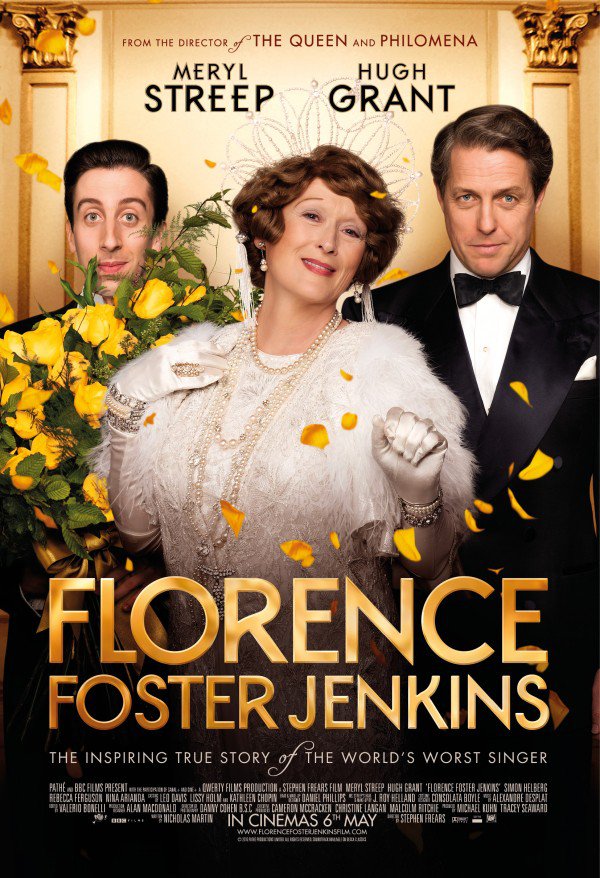 The title character is, once again, based upon a real person. As portrayed by showy Meryl Streep (Hope Springs, The Iron Lady, Suffragette, The Giver, Into the Woods), playing an old woman as old for the first time in her long and enduring career, the title character is a haughty eccentric with an impetuous and checkered past which jeopardizes her health. Paramount’s marketing has successfully established for the audience in advance that Jenkins is an awful singer who skates along taking voice lessons and singing out of tune.

Florence Foster Jenkins is not as sentimental as it sounds, and it’s a complicated, lush and polished Forties-in-New York-City affair which makes you laugh at the main character, double check the laughter and think twice about what the whole movie means (as Frears pictures usually do).

Opening credits play on New York’s skyline, teasing the romp to come. Decked in outrageous costumes and prancing around her marriage to Hugh Grant’s Shakespearean actor, who’s reduced to being her manager, Jenkins has good taste in music. She favors Chopin. She creates an appreciation club for Verdi. She supports her conductor friend Toscanini. But the rotund heiress, who once played piano in the White House as a child, can’t sing. That she really, really wants to sing and is oblivious to her inability makes most of the movie’s humor.

Hugh Grant shines portraying her husband, who, incidentally, really, really wants to act. He arranges an elaborate facade which becomes the film’s farcical conflict, evoking the spirit of the lighter, naughtier Mrs. Pettigrew Lives for a Day. The dreadful private shows are hilariously deceitful whatever the ethics and it’s hard to suppress laughter no matter how hard you try. Enter an expressive, young pianist (perfectly cast Simon Helberg) with an ambition to match hers and the plot deepens.

For a time, screenwriter Nicholas Martin seems to lampoon serious artists but that’s not a Frears imprint. Then, there seems to be a contest between loyalty and unchecked or unearned ambition but that’s not it, either. How then to account for a movie that holds its ardent fool in high regard? This puzzle is part of what makes Florence Foster Jenkins, neatly scored by Alexandre Desplat, engaging, if not flawless. As the young performer comes out, and how and what he comes out and into happens in gentle and suggestive ways, this Paramount picture’s theme that art in general and music in particular, from opera’s Verdi to jazz’s Louis Armstrong, inspires one to become stronger for life takes shape.

This happens in a scene at the young man’s home, a warm, lived in place of solitude where he conditions and practices with relaxed, monastic devotion. It’s a lovely scene for its bonding and it marks the transition of Florence Foster Jenkins from a snickering, snorting romp to an elegy for making real in one’s life the track that plays in one’s mind.

In an age of flickering amusements by American Idol‘s Sanjaya or William Hung, as well as more lasting, damaging fakes and frauds named Kardashian and Trump, it’s natural to laugh at what’s ridiculous. In a culture of faking, it’s harder to grasp that goodness—and a sense of benevolence gives Florence Foster Jenkins its wings—starts with honest effort, even if you fail to pull it off (and more so, in the case of Susan Boyle, if you do). Not every moment rises above what can also be acknowledged as a sad, tragic spectacle. But neither is every moment a jab or a joke about telling a gigantic lie and the best scenes depict with sincerity and strength the attempt to reconcile one’s damaged life in a perfectly balanced note.