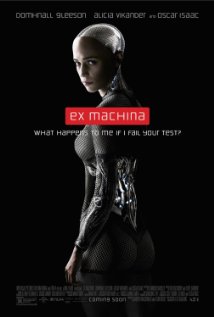 Writer and director Alex Garland’s Ex Machina, missed for review upon its April 24 release and suggested to me by a sharp reader on Twitter, is too slow and talky but it has a point and the point, however limited by the story of humanizing a machine, is thoughtfully made. As with the best of these movies about artificial intelligence (AI), from Silent Running (1972) to last year’s Her, it resonates in terms of measuring intelligent man’s loneliness in space and time. But it’s based on a flawed premise mixing the metaphysical with the manmade.

At least the carefully filmed Ex Machina, which is wisely sketched in thin lines more than drawn, almost as a cinematically styled stage production, integrates its theme with a strong and effective finishing touch. In this sense, the moral of the simple yet evolving story of a thinker who creates a machine and tests it with a programmer, has more in common with the best science fiction, such as Invasion of the Body Snatchers (1956). To what extent man becomes like a machine when he takes machinery—fundamentally, technology—on faith is explored here in linear fashion.

Ex Machina, which features Alicia Vikander as the automaton and Domhnall Gleeson as the technician (reuniting from the vacuous Anna Karenina), led by the scene-stealing Oscar Isaac (Sucker Punch, Agora) as the enigmatic inventor, starts off with the necessary mystery of an adventure launched by the tech company’s founder, winding slowly but engagingly to Gleeson’s young computer geek working on the new discovery. Isaac’s character is guarded and understandably reticent about sharing his creation. But one senses there’s something else going on. So does Gleeson’s geek, who rises, or falls, to his true, deepest nature. How this happens ought to interest anyone who thinks that basing decisions on algorithms programmed by humans, such as whether to see a movie from an estimated aggregation of people’s opinions on Rotten Tomatoes, is a good idea.

Set in a remote region of the world with rivers, glaciers and waterfalls surrounding one thoroughly high-tech house, Ex Machina plays itself out with style as the two men navigate the replica of a woman. In this second part, the film falters and sags with too much sameness. Then, just when it’s becoming an excuse to ogle and fawn over mannequin-like machines that resemble bony and emaciated nude women in pornography favoring poverty-stricken females, Ex Machina scores a plot twist and makes a point. Stripped to its essentials in a movie that’s both overly simple and ponderous, writer and director Garland offers a stylized warning against what might be described as the pale, narcissistic nihilism, which redounds to faith, of today’s top technologists. They might be called technologians. Ex Machina, playing like a more intimate Blade Runner (1982) prequel with touches of an upmarket Liquid Sky (1982), posits what might happen if they came to rule the world.