If, like me, you’re a fan of Robert Downey Jr., you may know that his choice of roles lacks ambition, challenge and imagination. Unfortunately, his newest movie, middling general fare for Universal Studios, is among his worst pictures. 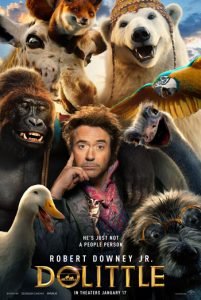 It’s an incomprehensible, computer-generated jumble. The period piece, Dolittle, will do nothing to enhance the outstanding actor’s reputation. It’s a remake of a Sixties’ 20th Century Fox musical box office bomb starring Samantha Eggar, Anthony Newley and Rex Harrison. The title refers to a character — created by author Hugh Lofting, apparently during World War One to entertain his children with a tale of the fictitious naturalist John Dolittle in Victorian England — a doctor that “talks to the animals“.

Robert Downey’s voice is muffled. His John Dolittle speaks in a barely audible stream with an accent best described as Mrs. Doubtfire by way of somewhere between Wales and Ireland. The Iron Man star looks haggard, frazzled and befuddled. He’s shot in a way that’s unbecoming. Downey mumbles and generally looks like he’d rather be deadpanning through another Marvel movie. But he’s only occasionally on screen.

Most of Dolittle, which features an onslaught of wisecracking animals in Victorian-era England that say such lines as “see ya, suckers!” and other vulgar modern vernacular, happens in two or three second fragments. Image-manipulated animals look fine, though a dog with eyeglasses looks completely unrealistic and not because the glasses look bad. At one point, a polar bear dives underwater and keeps yapping, having a conversation with diver Dolittle, whose medical degree is curiously left off the title. This type of arbitrary world-making pervades the non-musical, nonsensical Dolittle, which could’ve been fabulous fun.

Its theme about healing, grief recovery and health might’ve played well. But when a sassy-voiced squirrel says he feels as if he’s got a “front seat to Crazy Town” to no one in particular, I admit that I felt the same way. I turned to my guest. His eyes were closed.

Danny Elfman’s bombastic score thunders. There’s a scene with what amounts to a terrorist bombing, which didn’t seem to bother or stir kids in the audience. To peg Dolittle as fantasy is to be exceedingly kind, though a key plot point entails the thing everyone who watches HBO’s popular series says they find enjoyable about Game of Thrones.

The best part of Dolittle is an appealing actor named Harry Collett. The boy plays Tommy Stubbins with perfection. The innocent character, against his family’s hunting practices, loves animals. But he unintentionally brings harm to an animal, which he brings to the reclusive, grieving, misanthropic doctor. The dying animal’s literally left hanging with its life in the balance while Dolittle introduces an unnecessary character. This forewarns the deficiencies.

Downey deserves a stellar career from now on. The actor’s Sherlock Holmes was bad 10 years ago. Disney’s boring but profitable Marvel movies set him up for life. Dolittle is bad, too. The actor who wowed audiences with great performances in Chaplin, Less Than Zero and the woefully unknown and underrated Nineties gem Heart and Souls deserves better. Downey’s Iron Man entertained in the initial outing. But it is with sincere admiration that I wish for Robert Downey, Jr. better scripts, roles and movies than the atrocious Dolittle.