Demolition, written by Bryan Sipes and directed by Jean-Marc Vallee (Wild, Dallas Buyers Club), slowly seasons and stews its circular theme that building your best self starts with demolishing what’s too damaged to fix. On many levels, this musically cued drama arcs toward making a whole life in terms of essentials.

Like Vallee’s Dallas Buyers Club, the movie is challenging. Characters are complicated. Sipe and Vallee almost dare the audience to dislike the characters and dismiss this abstract study as pretentious. Yet Demolition stirs introspection, memories and imagination.

A blank young, upper middle class couple—Mr. and Mrs. Davis Mitchell (perpetually blank Jake Gyllenhaal, Prisoners, Brokeback Mountain)—live in a bland, modular house leading bland lives, sampled in an opening scene in which Beethoven’s “Für Elise” plays with Manhattan’s skyline as the picture’s backdrop. The wife drives as she complains that her husband doesn’t pay attention. In doing so, she doesn’t pay attention to her driving. The vehicle crashes. In the next instant, her father (Chris Cooper, The Company Men), a wealthy businessman who is also Davis Mitchell’s boss, tells his son-in-law that his wife is dead. “She’s gone,” the woman’s father tells his daughter’s husband. 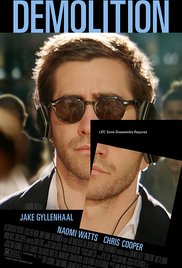 This devastating death is the incendiary device which sets off the chain reaction to blow surviving lives sky-high. It is important to remember this as you watch Demolition, which plants references to what in today’s combustible world might explode, from airbags, guns and moody teenagers to a package on delivery. His wife’s death ignites Davis to admit his remoteness—the distance between an ego and a life—born of his disowned self. Demolition, where most psychological movies like this one would deconstruct and reconstruct, offers a different perspective. Davis, suddenly aware of his blankness, deactivates to activate his life. He literally starts by pulling the stop.

He stalls his job, pulling work apart—based on advice from his father-in-law—rejecting customs and habits and, in Demolition‘s narrative device, writing letters to a vending machine firm.

This raises a flag, possibly a freak flag, for the company’s Karen Moreno (Naomi Watts, Birdman, St. Vincent), and the pair dance around one another which leads to an improbable friendship. Beethoven gives way to Heart (“Crazy on You”) as Davis and Karen bond. In comes her son, Chris (Judah Lewis), who, according to his pot-smoking mother “is 15, looks 12 and acts 21.” This ought to concern the rational parent. The boy becomes a crucial connection to Davis.

The boy is still a boy and young Lewis steals scenes, especially his first major scene in which he’s criticized for using profanity. The swear word is, of course, a means to vent. Its use affords the next scene when Davis swears, too, when he notices a station wagon tailing him. Circular words, symbols and themes thicken the plot, from Davis developing facial hair to the role of the mirror in examining one’s life. As Karen and Davis bond and immerse in each other’s journeys, laughing and frolicking on the beach, stakes rise.

The cast is good. Photography is clear, stylized and purposeful. Demolition is as dreamlike, impending and hollow as similarly-themed introspective films such as Gore Verbinski’s The Weather Man (2005), Ang Lee’s The Ice Storm (1997) and Peter Weir’s Fearless (1993). Everything—work, home, sex—is raised, examined and broken down. The kid is suspended for “telling the truth” in a school demonstration of demolition about the insanity of America’s longest war. Whether a look, a style, a face, an appliance, a method of storage or a treasured possession—everything gets smashed up in one way or another. This happens as part of the madness and/or meltdown of Davis Mitchell until, at a point on the circle, music shifts and Manhattan’s skyline returns, this time at night. Trouble looms.

Demolition surprisingly achieves clarity amid the storm. Watch relationships to connect clues and put pieces together as a boy dances and dresses his way to danger and controlled demolition, a father steps off his rollercoaster and a mother steps up for her mea culpa, completing a circle, a woman clears the haze and a man, learning to let himself be groomed—as he ought to have been as a boy—grooms himself. More than anything, Demolition dramatizes in uncomfortable abstractions the power, cleansing and relief of destroying what’s toxic.

As in Dallas Buyers Club, Jean-Marc Vallee once again illustrates that life is in motion, that one’s values are the fuel, and that living means cashing in for what ought to be an exalted experience—which starts only when you throw the switch.