Movie Review: Dawn of the Planet of the Apes 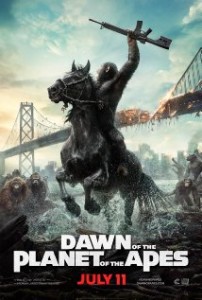 Dawn of the Planet of the Apes is more visceral than the 2011 movie. Taking place years after the simian flu spread and wiped out most humans, the apes and their clans have returned to the forest similar to where they once came from when they were brought for experiment by man to civilization. They live amongst the trees, swinging from the start as they did in the first movie, traveling in herds and memorizing slogans that “ape shall not kill ape.” As we see when Dawn commences, civilization has nearly dimmed to nothingness, save for a band of rogue human scientists and adventurers who seek to enlighten what is left of humanity by setting forth into the forest and restarting a great dam built by man.

The apes know nothing of this plan and the first half of Dawn shuttles back and forth between good apes, such as leader Caesar (Andy Serkis) and intellectual Maurice (Karin Konoval), and bad apes, such as Koba (Tony Kebbell), and the equivalent good and bad humans. It’s as much a dichotomy between nature and civilization as between ape and human and as the humans are drawn into the woods, the apes are transformed by what remains of San Francisco and various factions face off in relatively predictable ways. Multiple subplots and themes – tribalism versus individualism, primitivism versus civilization, barbarism versus rationality – play out as they did in the previous Fox Apes‘ series (exempting the godawful Mark Wahlberg reboot in 2001, which merits not a single further thought), with nothing especially deep or challenging but enough to think about along racial and class themes and what passes for ethical treatment of animals.

Even the worst humans and apes, such as Koba and a nasty human who smokes – smokers are always portrayed as nasty, aren’t they? – have a point. Humans, led by Keri Russell, Jason Clarke and an idealistic young artist (Kodi Smit-McPhee), earn ape trust while Gary Oldman tends to fortress San Francisco and Koba hasn’t really changed since he first appeared. When the battle begins, it’s easy to see where the collectivism, militarism and power-lust will lead and, as anyone who recalls Charlton Heston’s famous line from the 1968 original can tell, the prospect of man versus ape versus ape versus man dimming the lights to the point of extinction is never far from possible. This new Fox series is exciting and challenging enough to entertain while asking what breaks the ties that bind and bonds the broken ties.