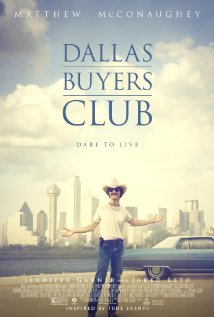 Dallas Buyers Club is more of the same high-caliber true life naturalism that is dominating Hollywood’s best new motion pictures. It’s an unforgettable, if at times barely watchable, cinematic experience. Credit a writer, Craig Borten, who heard about a straight Texan dying of AIDS who set out to expressly defy the government’s intervention in medicine – the identical issue at stake in two Texans’ defiance this year (Wendy Davis against a ban on abortion and Ted Cruz vs. the fascist ObamaCare) – who drove to Dallas, Texas to write the individual’s story before he expired.

That was 20 years ago. Thanks to Matthew McConaughey, producers with a grasp of a good story and a foreign director, this uniquely American film, which was shot in 25 days, exists to celebrate the spirit of entrepreneurialism in the strangest of separate lives. The Focus Features picture is based on that true story.

It begins with money and a faint American phrase about “the land of the free” from the national anthem. The screen’s filled with $20 bills, flashes of headlines about Rock Hudson (star of Giant), AIDS and Paris and we’re back in 1985, when the closeted movie star’s demise catapulted AIDS into national awareness. Meet Ron Woodroof (emaciated McConaughey), a straight man already HIV positive and dying and unaware of that fact. Ron is an electrician who works the rodeo, screws skanky women and always wants in on the action.

That last part may yet save his life because he soon finds out from a doctor who thinks for herself (Jennifer Garner in one of her best performances) and a doctor who doesn’t (Denis O’Hare) that he’s got the AIDS. After some stuff about support groups, intravenous drugs and Ron’s choice words for both of them about not being a m*******g “faggot”, he realizes he’s been told he’s got 30 days to live. Needless to say, his macho friends at the bar and the place he works don’t take too kindly to finding out the foul-mouthed ladies’ man, who makes trailer trash look like poodle-walkers on Park Avenue, has the gay disease. He’s cast out like a queer.

What one notices about Ron’s plight, and Dallas Buyers Club, directed by Jean-Marc Vallee, is that the healthy characters are also the most contaminated, while the unhealthy characters are the most motivated by life. Of course, that’s a Hollywood disease movie cliche. But Dallas-bred McConaughey’s charismatic portrayal of Ron Woodroof pulls it into a deeper sub-story about a Texas rebel who allies with gay AIDS patients to make money by trading in black market medicine.

At first, he’s partly motivated by his hedonistic habit of sluts, drugs and booze. But faced with the facts of reality – being denied medicine that works by the Food and Drug Administration and the cronies who abide state-sponsored health care and a depleted immune system caused by his own actions – he decides to take on the whole blasted government to save himself. As he blurts out to Garner’s doctor, a kind but timid woman named Eve, when she informs him about the government’s dictates: “Screw the FDA,” he says, putting government’s health care in context: “I’m gonna be DOA.”

Dying, broke and denied his property rights – his home is locked and seized with “faggot blood” emblazoned on the exterior – Ron gets in his dusty Dodge sedan and crosses the border into Mexico, where he meets another outcast (Griffin Dunne) whose license to practice medicine has been revoked by the U.S. government. Already stung by those who ought to know how to help him to stay alive but who choose to obey irrational rules, he violates the law and strikes his first deal for a cocktail of vitamins and drugs that, he reasons, will buy him time. He soon becomes consumed by the goal to remain alive, which means achieving his mission to earn cold hard cash. He meets a man afflicted with AIDS who dresses and behaves as a woman (Jared Leto). He’s disgusted by the transsexual. He tells him so. But he returns to the U.S. with life-enhancing drugs he can’t sell because of disgust with his target market. Suddenly, Ron’s chasing the tranny down the street offering to cut him/her in for a percentage of profits.

The partnership find a location, business model and soon they build a team of lawyers, patrons, patients and staff to fend off the FDA, those dubious doctors and anyone who hurls insults. Director Vallee does not indulge in sentiment and cliche. Dallas Buyers Club is hard to watch. There are men in skin and bones, needle marks, coughed up blood and in general it’s like seeing death in progress. But make no mistake: as bleak as it is, these men are fighting for their lives by fighting for their rights.

That doesn’t make it any easier to watch, with dying, collapsing and talking about interferon, AZT and whether to eat food with preservatives.

But life goes on, especially for the Jennifer Garner character. Eve is a follower of procedure at first. She listens to those mixed up with government bureaucracy and she has doubt. But she does not act. Only medicine causes her to think twice about the Dallas Buyers Club, a private, voluntary trade association which represents the opposite of government mandated health care. When Ron’s organization is targeted (like today’s Tea Party groups) by the IRS, Eve remains part of the establishment. Ron persuades her based on respect. By the time she proposes a toast “to wildflowers”, it’s clear that she’s willing to reconsider the wisdom of government health dictates. That she, too, gains from Ron’s trade association – her home striking a perfect balance caused by a gift that Ron bestows to her as a gesture of good will – stands in contrast to what she gets from the government-controlled hospital where she works.

“I say what goes into my body. Not you.” The line could have been pronounced by any of the three major characters – the pre-op tranny, the hetero with AIDS and a rational mind, the woman who’s also a doctor – and with all the fighting and dying in Texas the filmmakers lead the audience to the question: what would you do? Ron’s days are numbered, in clear, black and white titles, so Ron’s crusade culminates in a line every rational man should be able to grasp in these times: “Sometimes I think I’m fighting for a life I ain’t got time to live.” At that, Dallas Buyers Club reaches a somber yet inspiring conclusion.

It ends with the meaning of money being cashed in – a concretization of one’s selfish pursuit of happiness – and a faint American phrase about “the home of the brave”. By the closing credits, Dallas Buyers Club has earned it. “Dare to live” goes the movie’s tag line. Some will see those with AIDS – or those who stand with a woman’s right to abortion or with the Tea Party – as evil and they will object to them being portrayed as virtuous for fighting for the right to their own lives. Those who think that there is no higher virtue than acting in one’s self-interest probably won’t see this movie, which is too bad – because Dallas Buyers Club gets it right. As a sort of movie manual to match the ObamaCare, the AIDS movie’s got what it takes on the topic of rejecting dictatorship to extend one’s life: it’s greedy for more.