Disney/Pixar’s Coco is a flawed but colorful and entertaining movie. The title’s a misnomer. The songs are fine, if forgettable. The conflict’s resolved without morality and the theme that one should put others first or, at best, shoehorn one’s goals for the sake of others is atrocious. Coco has too many characters. It’s also too long (like most of Pixar’s movies). Certain plot points are confusing. But Pixar’s animators have outdone themselves with a mythical depiction of Mexico’s Day of the Dead. 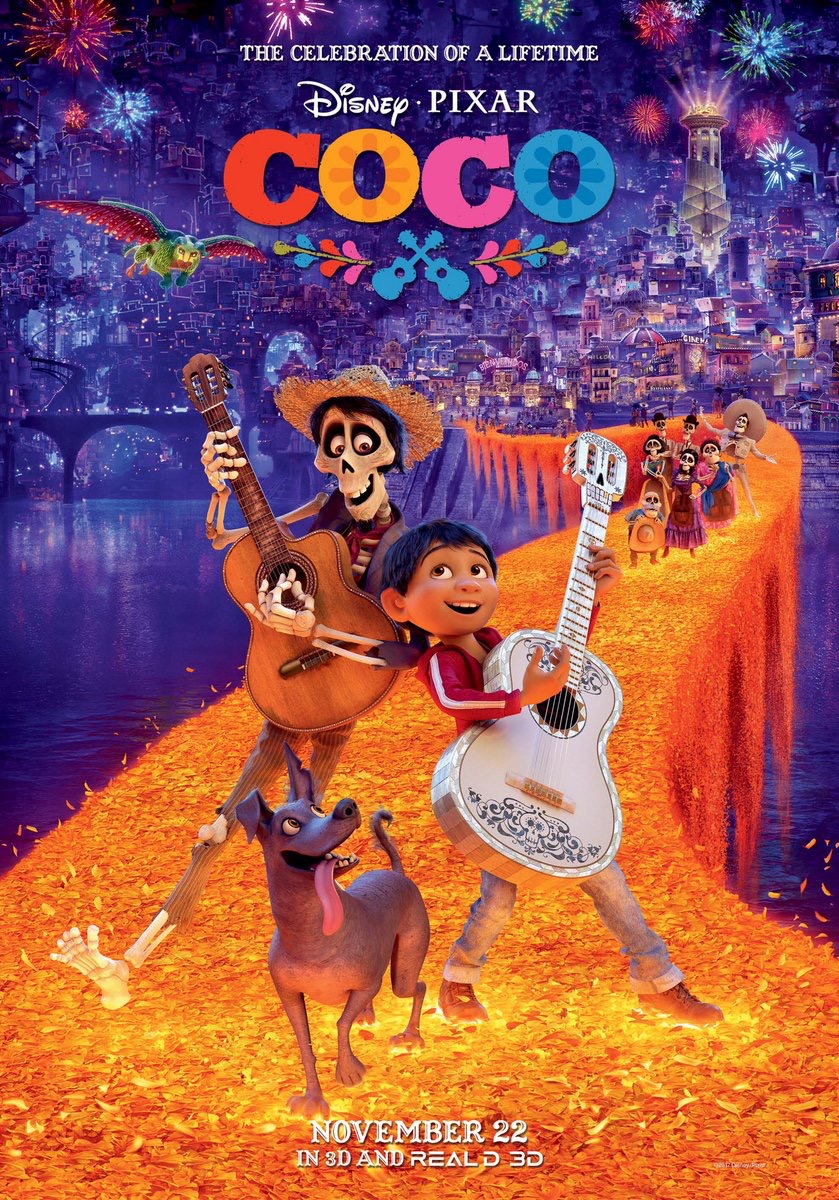 With multiple writers and an apparently all-Latino vocal cast, except apparently for a token non-Latino left over from Pixar’s early days, Coco takes its Day of the Dead theme seriously with an elaborate afterlife world exclusively for Hispanics (or Mexicans or Chicanos), leaving room for interpretation that the dead hang out in a festive afterlife before what’s deemed “final death”, which I suppose could encompass a notion of Heaven. As it is, Coco‘s not all caught up in Purgatory exactly but the afterlife rules are convoluted and I did hear children at the screening asking questions that went unanswered. At one point, I thought a character was dead that later came back alive. I still haven’t figured that one out.

But this is a movie which begins with wax dripping off candles being lighted for the souls of the dead to return to existence, so superstition comes with the territory. After a clever storybook exposition fans out one family’s possibly cursed legacy, centering upon a conflict between art and commerce or music and manufacturing, the basic plot takes shape. At Coco‘s core is an extremely creative, intelligent and diligent boy named Miguel (voiced by Anthony Gonzalez).

Miguel’s shoemaker family’s marred by an abandonment of a descendant who ditched la familia for his work, passion and art; a career in music, which the matriarchal family in turn bans from all generations for all of eternity. If this seems harsh, it is, and one of the problems with Coco is its refusal to reckon with the tyranny of a family run by a monster of a grandmother (Abuelita), a horrifying woman who physically assaults strangers and abuses her family with such cruelty that you question how she procreated in the first place. (If, under today’s onslaught of accusations against men, you wonder why men go bad, think about this character and how she pulverizes those around her).

A mangy dog comes along to ease Miguel’s bleak, deprived life (Abuelita hates dogs, too) and there’s plenty of laughter as Miguel works around the oppression with a terrific secret hiding place, where he’s erected a shrine to his deceased musical hero (Benjamin Bratt, Miss Congeniality, Modern Family), whom he admires courtesy of a VCR and videocassette. Despite the maternal order not to play music, Miguel goes one better: he makes his own guitar to play in festival competition. He even dares to pronounce what he’s made perfecto.

The miserable faces of Miguel’s unhappy dead relatives in pictures — photographs are key to Coco — do not lie. Before you can genuflect (and Coco rightly connects religion to hatred of the good with the sign of the cross), an evil woman crushes Miguel’s dreams, causing him to flee with the street dog, borrow, not steal, and slip into the pre-afterlife/post-life state of being not quite dead. Miguel meets dead relatives, and others, of course, and both questions and learns what it means to be dead or alive.

What this has to do with music and family, the main (and false) dichotomy in Coco, becomes clear. The night of the living dead Miguel encounters includes clever if disturbing real-life equivalents such as the Department of Family Reunions, tracing family footsteps with shoes and, of course, a goofy guide named Hector (Gael Garcia Bernal, Letters to Juliet). Audiences can judge whether Coco stereotypes Latino culture — Coco credits no less than 24 “cultural advisors”, all with Hispanic surnames, and entire Mexican families, cathedrals and agencies — and it’s loaded with sacrifice, martyrdom and death. The afterlife place is like an idealized Mexico City (it could easily be Havana) with retro style homes, arenas and mass transit.

“You don’t have to forgive but don’t forget,” someone says in Coco, written and directed by Lee Unkrich (Toy Story 3). This is a good line which both suggests a kind of righting of Miguel’s family’s twisted logic and lost legacy and hints at a moral reckoning to come (which wrongfully never comes). Coco sanctions the view that family comes first. This is Coco‘s unequivocal theme and the movie explicitly endorses the idea that the individual must submit to the family. Even on the film’s terms, this estimate is both unearned and unfortunate. But in its voices, animation — especially in faces both young and old — and Michael Giacchino‘s melodic, guitar-driven score (if not the movie’s mediocre songs) — many though not all of Coco‘s points and pictures fit like pieces of a puzzle.