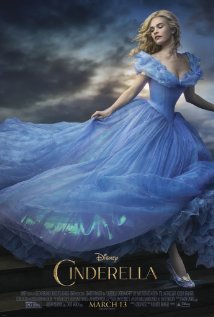 Disney’s newest version of the classic fairy tale, Cinderella, is an early contender for 2015’s best movie. Director Kenneth Branagh’s live action romantic drama is that serious, complex and powerful. This is no girly movie about a pretty servant waif bestowed with princely attention. Written by Chris Weitz (Antz, About a Boy) and made with both realism and romanticism by Mr. Branagh (Dead Again, Thor), Cinderella digs deep into dark psychology.

Preceded by an insipid animated short (“Frozen Fever”) based on Disney’s Frozen megahit, which in fragmented bits has the “Let it Go” sister character sneezing miniature snowmen during an effort to please her sister, belting another tune that’s out of proportion to the story, one of literature’s most iconic characters gets a strong, stylized backstory that dramatizes why she runs.

The child Ella, as she’s known to her parents, is wanted and loved and raised to “believe in everything” which in this context means to regard the universe as benevolent, so she sees the world as it could be. Her father’s a hardworking, moneymaking merchant. Her mother’s an imaginative woman who hushes her daughter with warm melodies. Ella dances with her dad, relishes life at her country home including its resident animals—she takes a liking to a mouse that she notices is “greedy”—and cuddles a stuffed bear as she falls asleep at night, a happy only child in a proud, productive home. How rare it is that a rich businessman is portrayed in a positive light, let alone that his wife and child are shown being loved by the capitalist, who in the broadest sense evokes Henry Rearden in Atlas Shrugged.

That he winds up with a woman who evokes that novel’s wicked Lillian Rearden is a credit to Weitz’s script and Mr. Branagh’s single-minded storytelling. This is the most philosophical version of Cinderella, powerfully developing, binding and reimagining the girl’s story to the point of utter anguish and agony, caused by the stepmother Lady Tremaine (Cate Blanchett), who hates herself, her children, men, man and the entire universe, even her very own miserable beast of a cat. Stepmother embodies the irrational female ideal; overdone style as mask for what is rotten at the core. The lady is a monster.

Tremaine makes one of the screen’s great entrances, after Ella’s mother prematurely dies, and Cinderella‘s transitions, exits and entrances, landscapes, costumes, colors, designs, sets, songs and score by Patrick Doyle are themselves a grand and skillful achievement. Her very steps are contemptuous of work and effort and, in the final instant of her introduction, she smiles, intending the opposite of the expression on her face, the whole sweep of her existence a fraud. But the villainess comes after the exit of Ella’s mother, which establishes pretext to the story’s highest theme that there lies within one’s strength and soul the power to unite what is and ought to be but, also, and crucially, that there is but one life, and it is here and now, not ever after, and that, like the stroke of midnight, it comes to an end. Cinderella is exactly that sincere, severe and subversive. It is exquisite in every detail.

Ella is left by her mother with an example in grace, strength and spirit, and, after her father, too, makes an exit, she is tested, contaminated, damaged and deeply inverted so that by the time all commoners are invited to the prince’s ball, the sweet girl Ella (the lovely Lily James) is hungry, cold, tattered and totally enslaved, a near savage whose innocence has been turned against her to the point where she begins to lose herself. The incompetent stepsisters, Drisella and Anastasia, are mere extensions of their man-hating parasite of a mother, who may yet find an accomplice in the kingdom. Everyone, as most know, is heading to the ball, though not before Cinderella, given the name in degradation and hatred of the good for being good and majestically touched by a paternal spirit in a scene with a stag, catches a glimpse of man as a heroic being and life as it ought to be. Midway through Cinderella, the ball represents that which is possible.

In classic storybook style, music and pictures, director Branagh revises the fairy tale with heart, depicting the lonely, resourceful girl who finds the good, loses her nerve and ought to be rescued from her imprisonment. Enter the prince (Richard Madden), a grand duke (Stellan Skarsgård) and a captain (Nonzo Anosie), who will strive to find a suitable bride at the ball, under the guidance of the king (Derek Jacobi, The King’s Speech). While Cinderella faces an inner struggle reflecting on the mother-daughter bond, so does the prince through introspection of the father-son connection.

Together, Cinderella and her prince are electric. The actor that portrays the prince is perfect. The palace and ball are grand and their dance, depicted in slow, long takes, is magnificent, though it should have gone on and on. Cinderella’s dress is a wonder—the last dress she wears is also a stunner—and the prince is handsomely upright, too.

“Just because it’s done doesn’t mean it’s what should be done,” the title character says to the prince in a line that reverberates throughout Cinderella and its couplings and, despite overbearing computer enhancement and absurdism in an otherwise innocuously kind fairy godmother (Helena Bonham Carter), Kenneth Branagh’s larger than life psychological fairy tale stays true to its heroic theme. As it traverses from family bliss to parental poverty and grand romanticism, Cinderella ultimately arrives at an exciting and original destination, where the prince and rescued girl are truly in love with one another as equals. Dispensing with fantasy, seeing themselves as they are and literally reflecting upon themselves in mirrors, this time the man and woman align chosen paths with reality while diverging from tradition. With a willingness to judge what is evil, marvel at what’s good and innocent, and indulge in great moviemaking, Cinderella powerfully depicts the classic tale as young lovers’ courtship which begins with taking stock of oneself.