After the nonsensical to middling Avengers movies, and last winter’s mediocre Black Panther, I must admit that I didn’t expect much from Marvel Studios’ newest movie, Captain Marvel, for Hollywood’s only mega-studio. With mixed themes and flat characters, it’s Marvel’s worst movie yet. But, even on Hollywood’s new feminist Me, Too terms, this putters. 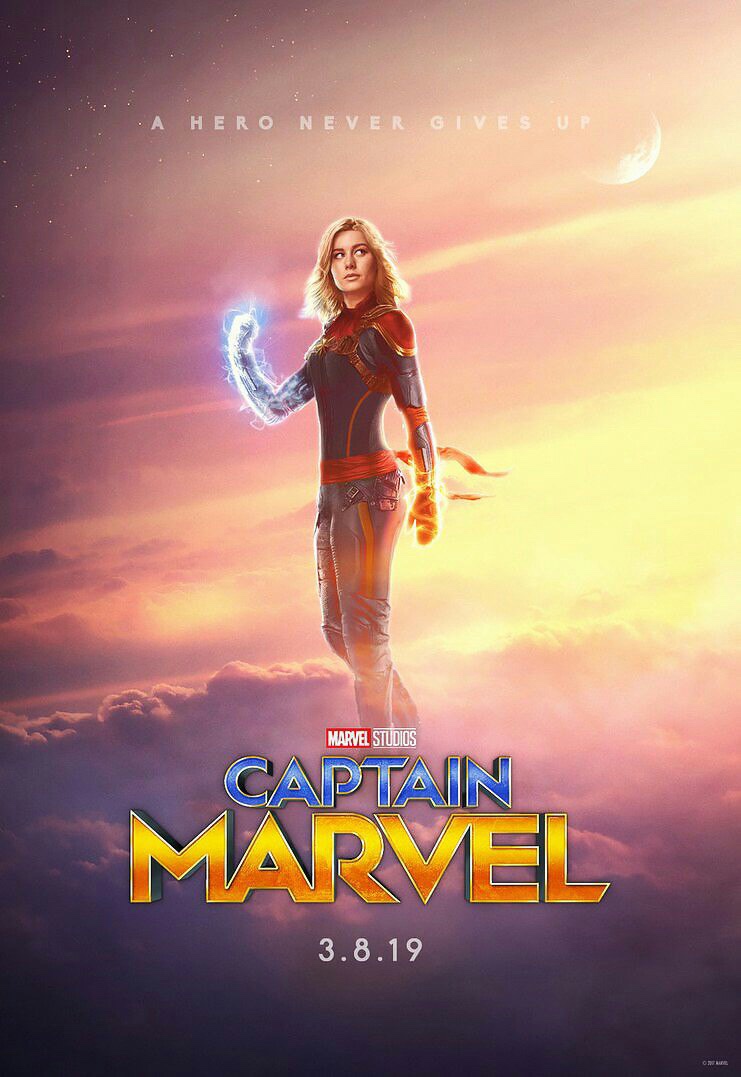 Larson is not what’s wrong with Captain Marvel. But she’s so stiff, dull and distant, the opposite of Marvel’s male comic book heroes, that you keep waiting for an alien to pop out of her to explain her lifelessness. And, oddly, a good chunk of Captain Marvel derives from alien abduction/torture conspiracies or fantasies.

With supernatural powers in a faraway galaxy with flying cars and some sort of Middle East type conflict that goes unexplained, Larson’s blank character aimlessly wanders wondering about her true identity. Though her mentor, played by Law, assures her that he seeks through her superior’s “supreme intelligence” to guide her toward her own “best version”, something’s off about the altruism. Somber music and platitudes forewarn.

But what exactly is the mystery and why doesn’t she remember her past? I stopped caring after a while. Any but the most diehard Marvel fans and Disney investors will, too. A race of shape-shifting aliens resembling a cross between Lucasfilm’s Darth Maul and Mandy Patinkin’s character from Alien Nation that figure into the plot are more interesting than Larson’s plain, ordinary woman.

In terms of plot, my primary objection is that the protagonist fails in almost every task at almost every turn. She’s either incompetent or incapable or both. But the lack of heroism, let alone superheroism, stands out. This fact is on prominent display when an earthling pal (Lashana Lynch) shows up and Captain Marvel, which measurably lacks anything remotely marvelous, turns into a female version of Top Gun complete with cocky pilots, rock music and a mascot named Goose. The gals strut and mutter about how they’re going to “show these boys how we do it”.

The audience is primed to react to the movie’s feminism via the soundtrack cues which include a nonstop string of female rock anthems from the Wilson sisters’ Heart, Gwen Stefani and Lita Ford. With fetishism, a Ford Mustang cameo and the multiculturalism of TV’s Deep Space Nine with the snooze-inducement factor to match, Larson’s confused woman traipses around with Cybill Shepherd’s style minus the sex appeal.

All of this might be tolerable or defensible as escapist fare if the protagonist accomplished anything but she rarely does. When she could use a hostage early in the action, she runs away instead, abandoning her shot at using the leader of the antagonists as leverage to make a clean getaway. By the time Captain Marvel arrives on earth circa 1995, complete with visual reference to the Smashing Pumpkins (minus, of course, their male vocals), you hope against the odds that, as one character puts it, “it all makes sense”.

Captain Marvel doesn’t come close to pulling it together. Each plot point is predictable. Every crash, dogfight and effect looks like it’s taken from a video game. Screenwriting is stale. Characters are boring. Women either dress like Madea and stomp about in perpetual, causeless anger or they pose, turn and pose again and wear outfits that men mock. In its forced feminism, Captain Marvel tries too hard and goes too far in counting on a sisterhood it never earns.

For example, a child character named Monica at one point enthusiastically urges her sole guardian, her mother, to fly into space against an army of aliens knowing that her mother, who expresses that she’d rather stay, live and enjoy raising her child, may die. Not only is this a shocking scene that’s hard to swallow, it is played for emotion, as if the audience should want the child to urge her mother to choose near-certain death. That this happens after the child is kidnapped by an alien, held at gunpoint and forced to watch an alien attack on earth is disturbing.

Larson’s character destroys private property with abandon, never once offering to compensate anyone for her crimes. She muses about what it means to be human, it’s true, between her many unsuccessful attempts to display that women, too, can be as devoid of values as nihilistic or inscrutable men. That she does this in a t-shirt that makes reference to a nihilistic male rock band whose name refers to a male sex organ is at once too clever, stupid and appallingly condescending to the rational individual.

I “can’t unsee” Captain Marvel, to borrow a phrase from Jackson’s Nick Fury character played here as younger thanks to computer animation, though this, too, feels forced as no one really used that expression in the mid-Nineties. I’m pretty sure this includes secret agents of the government.

But I can say that I have seen Marvel’s newest politically correct mixture of carefully calculated plot points and call out its cynically lazy sexism.

At a crucial point, one female character asks another female character: “How’s my hair?” This line sums up Captain Marvel‘s value as art and entertainment. Add a not-so-subtle plug for the pro-Palestinian “BDS” movement against Israel that’s being spread on college campuses and you get the essence of a movie about a woman that neither deserves to be called a captain nor what one might rightly consider marvelous. In this tale, the woman is pretty and she’s pretty dim.