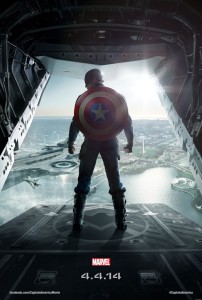 Chris Evans makes the new Marvel Studios picture, Captain America: The Winter Soldier, a strong, exciting and powerful sequel to 2011’s Captain America: The First Avenger. Its theme of bonding with shared Americanism – rightly depicted here as the essence of individualism – echoes throughout the film. There are a few problems, but mostly this movie, released by Disney, makes for an exceptional experience.

First, the problems. Some of the computer simulations, and especially the visually jumbled fight scenes, are distracting and disorienting. It takes one out of the movie. Also, for consistency, it must be mentioned that a sequel should flow perfectly from the original and this one doesn’t strictly speaking; Winter Soldier is contingent upon The Avengers (which I never saw) and this is poor form. The film should stand on its own and instead characters and references pop all over the place that have no prior existing relationship to the lead character and plot. Some sultry superwoman character played by Scarlett Johanson is a major part of the picture and the audience is never properly introduced. And don’t let gushing fans fool you, as gushing fans are prone to do, that this is the best movie ever. It is not; this is a brilliantly conceived comic book hero movie which is powerfully written and produced and well acted, not more than that.

With Evans in the lead, it’s no big deal. He gives the film its power. His all-American good looks, sincerity – really, his seriousness – and ability to portray emotional depth and an honest, upright character exude both what it means to be a captain and what it means to be American. This is crucial, this is powerful and in Captain America: The Winter Soldier, which is essentially like the story of American whistleblower Edward Snowden, this is everything.

Beginning with a man on the run, in friendly competition with a comrade, and in the deepest sense, the movie jogs around monuments to men such as Washington, Jefferson and Lincoln – men who were giants in forging a nation based on individual rights, a fact which is at the core of why this leaves other comics pics in the dust. War hero and veteran Steve Rogers (aka Captain America) adjusts to life in the new America of the modern age, where he’s been delivered since the first movie’s time transport. The change allows the plot to take a serious, deep turn toward the inner torment of the solider and, more broadly, those who work for the government. Rogers wonders how he will fit in and he wonders aloud whether he wants to; the more he sees of the new American state, the less he likes it. He dares to doubt it.

The new captain of America is strong, somber and, after a mission compromised by a warrior (Johanson) too eager to serve the state without question, skeptical. The action is swift in the overseas operation and Captain America comes on like a ninja with perfect timing, precision strikes and athletic ability. He’s in top form, or, as an Apple Store employee puts it in a good laugh line, he’s “specimen”. The Apple Store serves as an organic product placement (unlike the Chevy brand) fitting the movie’s theme that the rogue individualist thinks for himself, finds refuge in commercialism and sports the most durable, best gear. When he reports to government security SHIELD boss Nick Fury (Samuel L. Jackson), who seeks cooperation from world security principal Alexander Pierce (Robert Redford), Steve Rogers further doubts who is friend or foe in the rising military industrial state.

But he never doubts himself. This is why he cashes in on a new friendship with a fellow war veteran named Sam (Anthony Mackie) who tends to those who pay the ultimate price of the military industrial complex. As the fracture in the burgeoning Big Government spreads into rupture, threatening SHIELD’s stated purpose to protect freedom in the country, Captain America comes to understand the fallacy of having faith in the state and the urgency of starting from scratch. As Redford’s distinguished statesman says, with crisp, concise economy: “to build a really better world sometimes means tearing the old one down.” This Hunger Games type dystopian vibe permeates Winter Soldier, which cleverly supplants a mysterious automaton that perfectly represents and dramatizes the movie’s core theme that every individual faces the fundamental choice to get in line and follow orders or break free and think for himself.

Only Captain America sees the big picture and he knows what to do, motivating and activating the few who choose to step forward and reject faith in government – when he expresses consternation that so many have gone wrong, one steps up to say “not everyone” in an emotional scene – and he knows both not to trust everyone and not to discard trust entirely. As he takes on the whole government, with a stirring score by Henry Jackman, he studies the past, including his own (listen for the voice of Gary Sinise narrating at the Smithsonian), thinks about every act and lets himself feel. He sees himself as he is, as he was, in thoughtful and powerful scenes, realizing that his own heroism is a decisive force for Americanism against the villain’s correct observation that civilization is willing to “surrender its freedom voluntarily.” Captain America: The Winter Soldier explicitly rejects sacrificing freedom for security, so don’t expect this film to win Best Picture with a state-sponsored presentation by Mrs. Barack Obama.

Instead, Steve Rogers as the captain of his (and the nation’s) soul runs, hides and seeks refuge from the oppressive state, just like Snowden. He painfully learns the 21st century pitfalls of treating government and technology as a religion with the cost the life of each fellow soldier whom he has had the honor of fighting beside, the leitmotif of this extraordinary cinema series. He is willing to stand alone – he says so, plain and clear – and, in the war between the rights of the individual and the omnipotent power of the state, dramatized here as an epic battle with wings, agility and rationality, he asks no less of each American in return.

The villain, once unmasked, seeks to pit the choice falsely as order versus chaos, just like Obama. Captain America: The Winter Soldier, beautifully portrayed on every level by Chris Evans, depicts what ought to be America’s shining response.