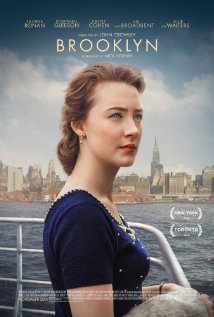 Watching the unreservedly, nostalgically romantic Brooklyn, I kept waiting for modernism to creep in and ruin everything. Frankly, there comes a point when that’s poised to happen. But this cinematic tale of one young woman in two contrasting countries plays a neat trick that spins one’s modern expectations.

Audiences should sit back and revel in this version of 1950s New York City’s Brooklyn borough. I couldn’t take my eyes off the screen. Prepare to be moved, delighted and enchanted.

Brooklyn may be the year’s most enchanting picture, vying for the status with Kenneth Branagh’s Cinderella and Todd Haynes’ Carol. In solid, primary colors, music and a rare, classic movie look with the intelligence of Nick Hornby’s (A Long Way Down) screenplay to match, director John Crowley (TV’s True Detective) makes a straightforward character study of an assertive, self-aware Irish Catholic woman (Saorise Ronan in a career breakthrough role). Torn between two worlds, the old and the new, in the middle of the 20th century, she is tested.

A lot happens in her young life in this deceptively epic movie, starting with the bold choice to leave Ireland for America, a choice she comes to doubt in spite of a reason to stay in the person of another, endearingly played by Emory Cohen. Hornby’s writing, based on the novel by Colm Tóibín, is excellent in every scene, with slow, earned development resulting in subtle, emotional and powerful filmmaking. The script is so well constructed that nearly every aspect has a corresponding aspect to contrast old and new. When she comes to America, her color is green. When she returns to Ireland, her color is yellow, yet these colors represent the character’s opposing sense of life in each nation.

This is because this plain, stern, strange-looking girl is ripped between stark, mid-century institutional and cultural choices such as church versus secular, feudalism versus capitalism, collectivism versus individualism. On top of everything that happens—which you barely notice, thanks to Crowley and Hornby—are complicating factors that would confound anyone’s ability to choose: a genuinely kind and entrepreneurial priest, attentive males that let the woman do the talking, fast, crowded and competitive avenues of opportunity and slow, secluded and privileged means of entitlement.

The fundamental choice is between the old and the new.

Brooklyn depicts this alternating, revolving contest between the Emerald Isle and Coney Island. Almost every part pushes her and the audience into an urgent choice between unearned guilt and guiltless joy, the boss who tells you what to do and the boss who helps you become your best, golf and baseball, females who tear you down and females who build you up. Even her maiden voyage to America has a contrasting, companion scene. That all comes together in a way of her own choosing doesn’t lessen the impact of her integration.

But the subtle sentimentality of Brooklyn makes this a rich, colorfully textured exploration and embrace of Americanism which ought to be studied and enjoyed again and again. Whatever her choice or yours, this is a love letter to the New World—and an appreciation for and rejection of the Old World—with the expressive and breathtakingly achieved theme that choosing a country is as simple and exciting as choosing what makes your own character and choosing to think. Evoking the best, not the worst, of America’s past, through the experience of the newcomer—an immigrant—Brooklyn is a grand slam.