Denis Villenueve directs Jared Leto, Ryan Gosling and Harrison Ford in a refined sequel to 1982’s Blade Runner with this fall’s simple and stylized Blade Runner 2049. The original movie, directed by Ridley Scott, who gets executive producer credit here, was more of a mood than a compelling motion picture as far as I’m concerned.

This time, Villenueve matches the moody, noirish dystopian cinema style to the story — also based on a novel by science fiction writer Philip K. Dick with co-screenwriters — and comes up with a more coherent and linear movie than any version of the predecessor. As with Villenueve’s other pictures, such as Sicario, Incendies, Prisoners and last year’s Arrival, you don’t want to think too much about what’s happening on screen. What you see is often enthralling, as with his other movies, but there’s a limit to what the pictures convey. 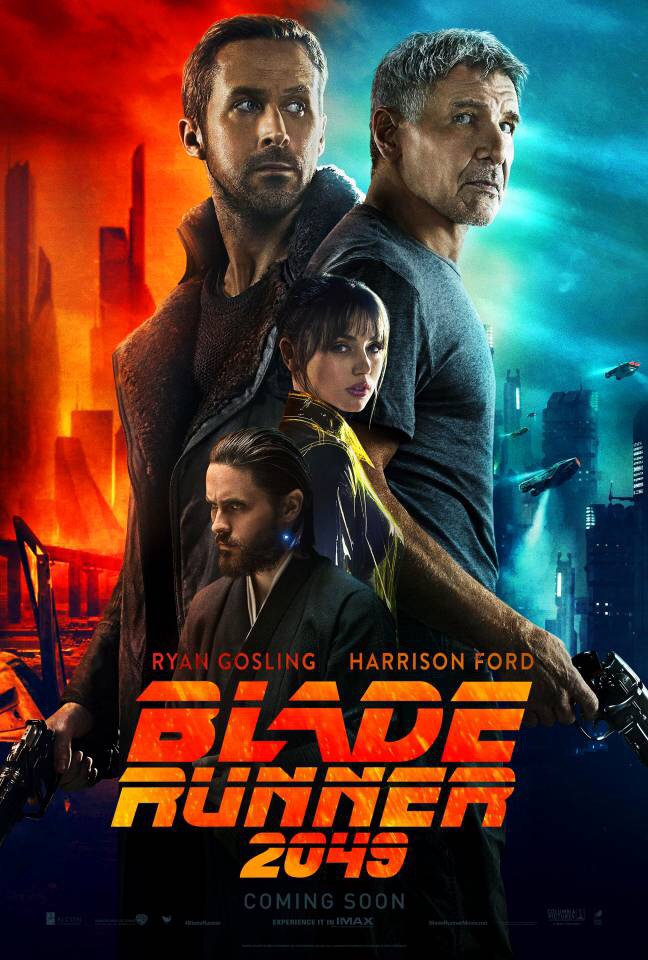 For instance, when a police boss (Robin Wright, Moneyball, A Most Wanted Man, Wonder Woman) throws a barb at her policeman K (Gosling), an android/replicant and ‘blade runner’ assigned to hunt down older model androids, essentially telling the expressionless young cop that he has no soul, you might be inclined to wonder what she has to gain by the jab. After all, if he’s got no soul, why bother to deliver the dig? If he does, on the other hand, insulting him might deplete his motivation.

But with terms such as pre-blackout, pre-Prohibition, slavery, “Soviet happy” and other little seeds planted throughout this long and visually arresting film, Blade Runner 2049 offers the constant promise of resolution. There must be a point to the action, lines and clues, right?

Nicely, and not too exhaustively, there is, with an almost archival deliberation of details, points and themes that show respect for Ridley Scott’s film without alienating the modern audience. I couldn’t tell you much about the original, except that I think the late Joanna Cassidy is terrific in it, but even I recognized Edward James Olmos when he shows up in the new movie. Villenueve balances Blade Runner‘s essentials without being confined.

One of his themes, however thinly rendered, is that one ought to be free “to be [left] alone” and, in this sense, the movie’s deserving of praise. The first act sets the future earth’s dystopian tone as K sets out to do his job, or, in a good line which taps the best and worst of how one should regard today’s cops: “Do your fuckin’ job!” Villenueve injects an urgency with slow-burn suspense amid the tone-setting and character-building. Besides Leto’s blind, villainous “industrialist”, though monopolist is probably a better term, a character in bangs and a ponytail who serves the sinister blind man (Sylvia Hoeks, evoking Genevieve Bujold and stealing every scene) makes a penetrating impression.

It’s in the second act that striking symbols, images and thematic nuances come into play, eerily playing on ghoulish news headlines with numbers, fires and ashes suggesting a holocaust. Add to this disturbing sense angry mobs, hiding places, implants, what might become a Trojan horse and, tossed in with product plugs for Peugeot and Sony, an explosive twist on getting a manicure. Villenueve alternates the action with quiet, slow plot progression, too, allowing a few scenes with a memorable memory maker to take root. All this and his usual attention to detail, from chipped paint and K’s clammy skin when he’s merging fantasy and reality with two women to the Salvador Dali-influenced surrealism in red with high heels suggesting Pierre Boulle’s absurdism ala 1968’s Planet of the Apes.

The third and final act begins with an inviting homage to better days, styled to a crisp Vegas casino piano bar neo-classicism, complete with flashes of Liberace, Marilyn, Sinatra and Elvis in moving pictures. This almost made me want to live in this film’s 2049. With an adorable old dog, it’s a wistful remembrance.

If it sounds terribly abstract, it’s because Blade Runner 2049 is, like Villenueve’s previous movies, too ponderous, deftly implanting seeds while crowding them so they don’t fully take root and bloom. I think this is a fundamental fault with the series premise, however, which revolves around a question, not an answer: what makes a man? Still, entire characters could have been cut to accentuate the idea.

That said, it’s stunning. Hangdog Ryan Gosling (The Notebook, La La Land, Lars and the Real Girl) is the stranger in this strange new land. Jared Leto (Dallas Buyers Club, Suicide Squad) and his accomplices dangle the prospect or threat of going “off-world”. The irascible, perpetually brow-furrowed Harrison Ford (Star Wars: The Force Awakens, 42, Cowboys & Aliens) reprises his original role (and is as bland an actor as ever). With waves, snowflakes and stairsteps symbolizing the constant war and peace of being human on earth — seeded with optimism — Blade Runner 2049 is something to see and ponder, if not to think too deeply about.