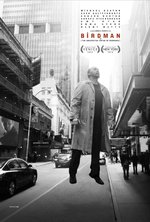 With Christ-like imagery, this pretentious film from the director of Babel about pretentious New York stage actors on the eve of a new production’s premiere never convincingly takes flight. As an ensemble character piece, with another excellent performance by Edward Norton, whose co-star from The Painted Veil, Naomi Watts, also appears, it is involving. However, Birdman chiefly belongs to Michael Keaton as an actor turned director who copes and spirals and copes with family and professional challenges during the pre-production of his cathartic new play. Much of his story, unspooled through the gauze of what might be his own subconsciousness, rings true.

The primary obstacle appears to be the Keaton character’s past success in the role of a superhero for movies and Michael Keaton brings his best to the part. A rash of cast, crew and family (and a critic) complicate his self-made change with drama, melodrama and real, imminent and legitimate problems, questions and issues. This all happens in real time, more or less, with cynical lines and dramatic and humorous arcs. One involves his daughter (Emma Stone, The Amazing Spider-Man), who stands up to her dad in a memorable scene and closes the show in her own way with a final scene which evokes the last shot in Babel. Director Alejandro G. Iñárritu certainly has something to say about fathers, daughters and heights.

Whether the message is as profound as Birdman would have its audience believe is up for debate. The film appears to stand for taking a leap into bold, new journeys. It does so while ticking a clock to put the journey into a certain, fixed perspective. If this engaging, artsy film is anything other than an odd, interesting microcosm of theatrical life signifying a sort of resurrection might depend on one’s patience and life experience, though Birdman ultimately dives and swirls in a flurry of confusion with moments of wit and clarity.