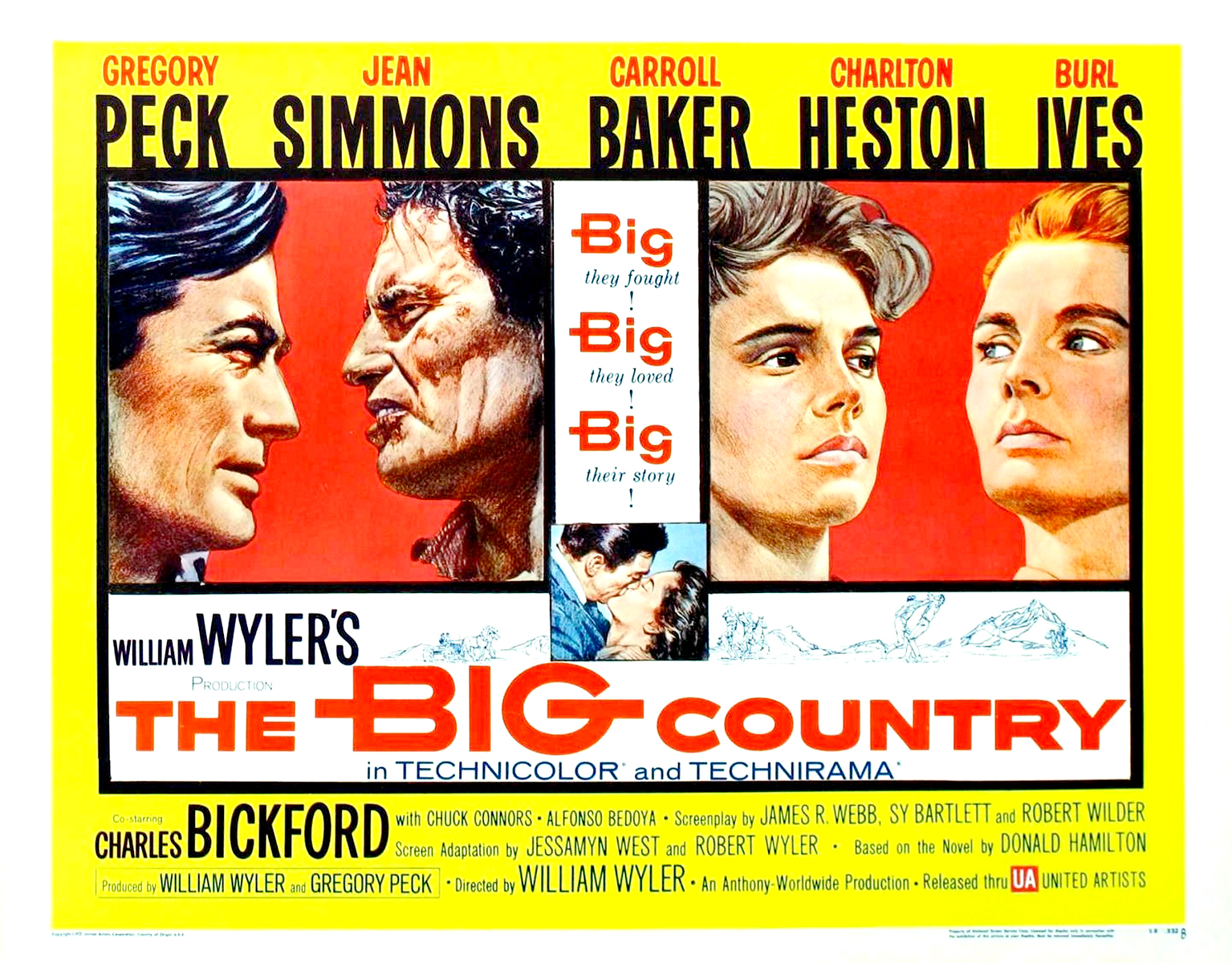 With an all-star cast, magnificent score and a powerful exposition underlying its theme, The Big Country, directed by William Wyler (The Best Years of Our Lives, Roman Holiday, The Letter, Funny Girl, Ben-Hur, The Collector), packs a punch.

This sprawling, violent and thought-provoking Western, which I watched with my Writing Boot Camp students at a screening at the Autry Museum of the American West’s Wells Fargo Theater, lingers and stays with an audience.

“I’ll be back,” says a character played by Chuck Connors, long before he played the rapist/slavemaster Tom Moore in Roots and a year before he played a man of honor in The Rifleman. That he says this to an innocent but strong schoolteacher (Jean Simmons) early in the picture signals the final conflict to come.

The main character is Jim McKay, played by Gregory Peck in one of his better roles and performances. Peck’s McKay is a civilized man; a newcomer to the American West. He represents a new wave of frontiersmen and women who populate the West. McKay drinks hard liquor in daylight, knows how to fire a gun and he eats steak and eggs. But he dresses well, thinks and knows how to sail a ship, too. McKay doesn’t swagger when he walks. He doesn’t drawl, either. His confidence is held down deep and he’s refined, not hard-charging like the Connors character or dogmatic like the duty-bound cowhand played by Charlton Heston. Indeed, Peck’s McKay is the quintessentially modern Westerner: he is the individualist who thinks.

But he is engaged to the daughter (Carroll Baker) of a landowner (Charles Bickford) who lacks the far-sighted brand of individualism that settling and inhabiting the West will demand. Herein lies a seed for moral conflict that spreads out far and wide. As everyone keeps telling the newcomer, this is big country.

In compelling scenes that run long and hard and entice the audience to pay attention, not drift off into sight gags, gimmicks and thrills, the locals’ small-mindedness in this big land comes out, is tested and gets roped. McKay’s fiancee’s daddy sets the smallness down at the dining table, as McKay reels back and sees the puny as it is for the first time.

At issue is an ongoing battle between two families over water rights owned by the schoolteacher.

“You can’t be friends with both,” someone tells a doubter. Jim McKay sees possibilities, however, looking out at the vast, open valley. Slowly, very slowly, at his own pace, this town’s people come to know the newcomer as a man of balance—even his future father-in-law sees that fact in McKay’s legacy guns, used in a duel McKay’s father lost—and the more they know him, the less they like him and his newfangled ideals. Among the radical notions he brings are treating a man with benevolence, not scorn, whether he’s drunk like Connors’ roughneck cowboy or foreign like Ramon, who runs the horses at the daughter’s ranch.

Treating a woman as an equal is another ideal, which not even his own would-be wife comes to want when she’s faced with what it really means. Baker and Simmons are a pair in contrast as much as the other two duos in this trilogy of contrasting couples. Their two Western women characters pit the self-reliant against the self-centered in a thoroughly engaging subplot. Simmons’ woman works with her hands and her mind while Baker’s acts more like a pre-Industrial typical female, working her ways and means, throwing hissy fits and pushing her man to fight for the sake of exhibition, not for the sake of a goal or a principle. When someone refers to him as a sailor, she points out that he’s a captain. Titles, not deeds, matter to her.

But deed matters most in The Big Country and it’s a deed to property owned by Simmons’ estate—the Big Muddy, as it’s known—which the rational man knows how to get and what to do with it. The plot twists and turns with great screenwriting from several credited and uncredited writers. Pivotal lines include: “Do what you’re told and don’t ask any questions”. The Big Country‘s best line, when climax nears and someone finally smears McKay, who dares to name the smear: “Coward? Are you afraid of the word? I’m not.”

This character contrast on an epic scale has everything it needs in abundance, from a technological tool used to outsmart the warring tribes, playfulness of a romance between equals and the sight of a man facing the big country alone, braced only with the use of his reasoning mind. With great writing, characters and performances, especially by Peck, Simmons and Heston dramatizing the virtue of loyalty, and fistfights, dancing, horseback riding, cattle, a stagecoach and stunning vistas in Technicolor—set to a musical score by Jerome Moross capturing what was once the insatiably American sense of life—The Big Country delivers its best feature late but not too late.

Burl Ives (So Dear to My Heart) gives a career best performance as the gruff patriarch who might have been a man of principle.

Ives dominates every scene with his body, voice and intensity. His nuanced turn as the leader of the ambush at Blanco Canyon (the name of Donald Hamilton’s story on which this movie’s based) adds depth to an already exceptional movie. The Big Country improbably has all of that and manages to depict with complexity the type of man—and woman—who idealized, conquered and won the West.