Movie Review: Battle of the Sexes

Battle of the Sexes is a simple and romanticized tale of athletics, man and woman.

For all the bluster surrounding 1973’s sensationalist sporting event billed as the title’s battle of the sexes, which was a running media theme in the 1970s, before feminism dominated the culture, this small, character-driven film dramatizes at its best that the pursuit of excellence is liberating. Beyond that, with blurred images and the sound of a tennis racquet hitting a tennis ball to serve as the start of Fox Searchlight’s best movie since 12 Years a Slave, it’s a cultural snapshot, too, signalling substitution of personality cult for hero worship. No need to tell you how that part ended up. 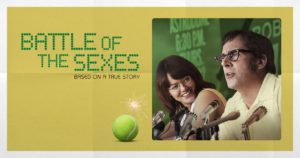 All of it’s well done, except for a few bad choices. As ex-Wimbledon champ Bobby Riggs, heavily sideburned Steve Carell (Little Miss Sunshine, Hope Springs, Dan in Real Life, Foxcatcher, The Incredible Burt Wonderstone) shines. And, as tennis champ Billie Jean King, minus the mullet, Emma Stone (La La Land, Aloha, The Amazing Spider-Man) does, too. Though Stone’s excellent depiction of King dominates at the expense of Carell’s excellent depiction of Riggs, and the imbalance minimizes Battle of the Sexes, the full measure of man and woman as athlete emerges.

The upshot is that Riggs, a 55-year-old former tennis champ, the world’s top men’s tennis player in the 1940s, is a gambling addict who’s more or less relegated to drudgery at his wife’s (Elisabeth Shue) discretion. So, he decides to cash in his winnings and trade on the trending women’s tennis. Riggs is seen as a hustler, though he is also father to a young son with whom he plays and to an older son who’s grown weary of his schemes. The showdown, made possible when Riggs cajoles, challenges and defeats a conservative women’s tennis player (Jessica McNamee as Margaret Court), is a chance at redemption. Battle of the Sexes would have been stronger with more scenes with Riggs, especially in close-up during the title’s match in Houston’s Astrodome. Carell does what he can with unequal screen time as a sexist challenger old enough to be King’s father, a fact which is downplayed.

Sarah Silverman is slightly less grating than usual as a tennis hustler, too. Though her hustler is supposed to be arch, intentionally or not, Silverman’s Gladys is as exploitative of women’s players as the clubby men, if not more so because Gladys acts like she’s a women’s advocate. As Silverman’s character tells one female athlete: “I own you.”

Bill Pullman plays the villain, a league official who rejects King’s demand for equal pay and, though Riggs is underdeveloped, Stone’s studied, natural portrayal of trailblazing Billie Jean King, whose athletic achievements if not ability are also somewhat understated, gives the oncoming contest more of a matter-of-factness that works to the story’s advantage. As Riggs faces the reality of his overhyped challenge, and King glows in her newfound sexuality, feeling both contrite about cheating on her husband (Austin Stowell) and herself with an air of Elvis, the ’73 match watched by millions plays as one man’s self-delusion and one woman’s pivotal assertion of her own power as producer.

With Silverman’s gray-streaked Gladys, Riseborough’s ingratiating Marilyn, Stone’s hardcore athlete and Riggs basking in one final spotlight, with Howard Cosell foreshadowing an unfortunate age of captive TV masses hypnotized by Simpson, Kardashian and Trump, the audience is left to ponder who’s hustling whom and to what end. End titles omit certain facts, including King’s denial of her long affair with Marilyn, who sued for palimony when she was turned out, lost her case and may have in some sense been wronged. Battle of the Sexes depicts the pressure, release and glory of what it means — and what it costs — to be the best.

In this sense, Battle of the Sexes, written by Simon Beaufoy (127 Hours, Slumdog Millionaire, Salmon Fishing in the Yemen) and directed by Valerie Faris and Jonathan Dayton (Little Miss Sunshine), evokes 2015’s best picture, Steve Jobs. Though not as thoughtful, rounded and rich, it also revels in being about ambition, ability and competing to be the best.