Only in director Vincente Minnelli’s lavish and unique 1953 movie musical The Band Wagon, based on a stage musical and rewritten for the screen, does the audience get Fred Astaire and Cyd Charisse dancing to an adaptation of a Mickey Spillane novel within an adaptation choreographed by Michael Kidd, with a cast including Ava Gardner as herself, Julie Newmar in a ballet, pianist and composer Oscar Levant as Nanette Fabray’s husband, James Mitchell of All My Children and Oklahoma! and a character playing the Devil that’s based on Jose Ferrer (Cyrano de Bergerac).

In The Band Wagon, all of this comes in addition to the world’s greatest dancer in motion pictures singing as an actor playing a baby triplet.

The Band Wagon is this blend of zany, colorful and over-the-top depictions of show business. Incidentally, it’s also where the song “That’s Entertainment”—which spawned three grand Hollywood documentaries and became the movie industry’s unofficial theme song, capturing the spirit of Hollywood’s Golden Age—originates. If The Band Wagon sounds rollicking, that’s because it is—and seeing it for the first time, as I recently did, with movie buffs who know all the lines and places to laugh (at TCM’s Classic Film Festival 2016) is somewhat disorienting—but, like the mid-century America the movie inextricably represents, The Band Wagon mixes everything to arrive at an original climax, point and theme. 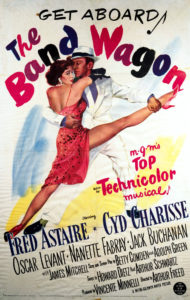 With screenwriters Betty Comden and Adolph Green and Mr. Minnelli’s visual and musical flourish and nerve, producer Arthur Freed, who similarly peeked behind the scenes of early Hollywood in Singin’ in the Rain (1952), depicts Broadway’s manic process to excess with everyone traipsing around singing, dancing, saying, proposing and doing ridiculous things in order to coax a fading movie star (enchanting Fred Astaire, as accessible and elegant as ever) and a ballerina (lovely Cyd Charisse in an acting, not merely dancing, role) to put on an opulent and preposterous stage show.

As the backers, visionaries and players get skewered, with an impossible and increasingly dubious show heading for disaster, everyone goes along on The Band Wagon to make the serious point that putting on a show, contrary to claims that the musical is unrealistic and frivolous, is an act of daring. Integration of singin’ and dancin’ with abstractions and themes poses a real risk to talented and sensitive artists and demanding investors.

This is the play as an enterprise. Fortunes, careers, lives, reputations and relationships may be staked on one, massive show in a grand production and it can fail and fail dismally.

So goes The Band Wagon, with neurotic characters Lily and Lester (Fabray and Levant), an easily bruised ballerina (Charisse), intense leading man (Astaire) and diva director whose name even sounds like an aspirant of the theeuh-tuh, Jeffrey Cordova (Jack Buchanan), who strives to stage a musical show based on Faust.

Like the opening’s blinding, shining silver Santa Fe railcars—the movie poster proclaims: “Get Aboard”—the movie barrels, bends and zips by with power, light and excitement. Fred Astaire’s legendary dance in “A Shine on Your Shoes” with a shoeshine vendor (the delightful and uncredited Leroy Daniels) in a train station sets an energetically nervy yet effortless pace and tone. With songs by Howard Dietz and Arthur Schwartz, including “Dancing in the Dark” and the stirring, all-American “That’s Entertainment”, the company keeps stopping, pausing and starting up the vehicle. Fred Astaire and Cyd Charisse give the play-within-a-play its tension, bringing the plot to a low boil in a grinding routine styled on Mickey Spillane’s The Girl Hunters featuring his private detective Mike Hammer, “The Girl Hunt Ballet,” choreographed by Michael Kidd.

All keeps running in constant motion and The Band Wagon skips and sputters with musicality, inviting sets, costumes, make up and eye-popping production numbers, from the first song and dance to the last. It’s hard not to notice the widespread influence of this MGM musical on Hollywood and the entertainment industry, from incarnations of Grease to versions of Batman and Michael Jackson’s “Smooth Criminal”. But the deliberately, brilliantly mixed musical The Band Wagon, balanced by the masterful Fred Astaire, who was underappreciated as an actor and singer, carries as its treasured cargo a gradual awakening of an older gentleman who chooses to reshape his whole life with a new act, taking everyone along for the ride.