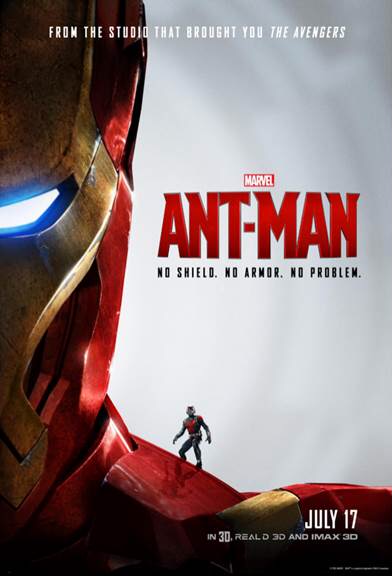 Marvel’s Ant-Man (opening on July 17) is good for what it is. These Marvel movies for Disney are comic book-based movies, and this resembles a classic comic book, with exaggerated lines and all, especially during the first half. It’s an original and tightly drawn plot about a thief’s redemption. With proper exposition, for a change, it’s as enjoyable as 2008’s Iron Man.

Things get fragmented, fast and predictable in the second half and this is not a young kid’s movie as scenes include profanity and disturbing deaths. But Ant-Man is a light movie about keeping perspective and it’s better than the recent Avengers picture. Look for Avenger Anthony Mackie (Black or White) and Marvel man Stan Lee.

The three main characters are Hank Pym (Michael Douglas, Last Vegas), his daughter Hope (Evangeline Lilly, The Hurt Locker) and Paul Rudd (Admission) in the title role. Pym invents a way of miniaturizing man, his daughter may be in on the plans and Rudd’s ex-convict burglar Scott Lang is recruited to conduct a live experiment on assignment to stop the bald, swaggering villain (Corey Stoll, Ernest Hemingway in Midnight in Paris) that aims to make the worst of the new discovery. The conflict plays out in corporate boardrooms and laboratories.

Aside from father-daughter storytelling arcs and Pym’s reclamation of an invention which rightfully belongs to him—he explains that he “hid it from the world”—the plot is plain. Action moves at a steady clip when it’s engaged. Ant-Man’s deployment, based on Lang wearing a suit and applying thought and technology that makes him the size of the insect and able to be skillful, agile and fast in commandeering other ants, comes at the expense of Lang’s redemption, largely due to a trio of clownish criminal cohorts. With Michael Pena (Lions for Lambs) doing a version of a Joe Pesci character, lines and scenes are broad. But this is a movie called Ant-Man, after all. Cartoonish comes with the deal.

With his geek, gee-whiz persona, Rudd’s fine in the role and Lilly is very good at measuring her performance in what could have been a flat character (despite a wig or hairstyle that makes her look like a cross between Swing Out Sister’s lead singer and Lee Grant in Airport ’77). Lilly’s character bridges Ant-Man‘s gaps, which should have been filled by Rudd as Lang. Veteran Douglas gets more screen time than expected and he’s good, too. This is pure popcorn fare, really matinee material at best, with glimpses of a more daring movie in scenes such as Ant-Man literally emerging from a groove into an electronic dance music scene as mindless as an acid-tripping hippie and a military-industrial complex scenario out of Starship Troopers. Audiences that become animated over everything Avengers will probably rave on Ant-Man, too, which offers coherent, light, witty escapism.