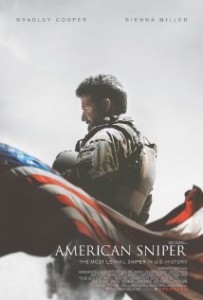 American Sniper is concise, powerful and emotional. Skillfully beginning with an Arabic chant and ending with the death of an American hero, this depiction of Chris Kyle, a Navy SEAL trained as a sniper and deployed in Iraq, is both a penetrating portrait and an ingenious condemnation of the monstrous ideas guiding America’s military. Director Clint Eastwood has mastered the war movie.

Childhood flashbacks depict a boy who is a son, a brother and above all a child who honors himself. He does so simply, seriously and with guidance from his father, a thoughtful hunter who teaches his son to think as a leader, neither as a bully nor as a conformist. The young Texan’s life is overly simplified, so he ends up in a rodeo with a girlfriend he doesn’t deserve. When he sees an attack on the West by Islamic terrorists on television, he makes a connection to something his father once said. He decides to change his course in life. He enlists in the military by free choice.

Soon, Chris Kyle meets and marries a woman (unrecognizable Sienna Miller) who is smarter than the first girlfriend. They plan to start a family. After Islamic terrorists destroy the Twin Towers, Kyle is sent to Iraq under orders from President George W. Bush. This is not a history movie, and the timeline is abbreviated, but anyone with knowledge of recent history can see the trajectory. Those who scorn the news, especially bad news, will be lost. American Sniper is rightly unconcerned with them. This is the story of a single-minded American who goes to war to defend everything he loves.

What is interestingly, tellingly omitted, unlike most Iraq war movies, is a sense of today’s cynical culture and the vacancy of the American people. By focusing on the mostly decent men who enlist in the U.S. Armed Forces, Eastwood with writer Jason Hall jettisons today’s sniveling, bankrupt culture and keeps focused on one man with a mission to fight, win and get back home. Along the way, Cooper’s sniper Chris Kyle does kill, picking off Islamic insurgents and combatants one by one from rooftops and windows in Fallujah and Sadr City, and he does think about it. He doesn’t joke about it and he abhors those who do. He doesn’t let thoughts distract him and he judges those who do. Of course, he is fallible and he makes mistakes, which his wife presses upon him during leaves between tours, even as she struggles to make sense of the damage and distance her husband’s actions leave in their wake.

The mess of an aimless military action that’s doomed to fail has certain, devastating consequences. So, Chris Kyle, like Pat Tillman, whose story is very similar, is jostled, hustled and left to fend for himself in every sense – physical, mental, psychological – and American Sniper shows how the un-war shapes him and ultimately renders him lonely, confused and deprived of the glory and brotherhood he deserves. The movie is not explicit in this regard. Kyle displays his sense of purpose straight, clear and true as he loses comrades, tries to relate to his wife and child and aims for a nemesis who’s been taking Americans down. The conflict lies within Chris Kyle, as he finds repulsion in being applauded for a high kill count while being frustrated that no one back in America thinks, acknowledges or talks about the mass slaughter of Americans in Iraq. Kyle carries but doesn’t use a Bible, which stands to him for general virtue. He listens to a soldier who questions the purpose of the deployment. He makes way through tour after tour while doing his best. Always, he wants to do more and be better at his work.

In other words, he’s like many Americans; Chris Kyle, the most successful sniper in U.S. military history and co-author of the book upon which the film is based, is proud, productive, kind, thoughtful and purposeful. Cooper portrays him without bravado in lingering looks from those blue eyes and in soothing tones in that gentle voice. When he is tested by a snickering soldier during a crucial and agonizing judgment call, he does his best to remain composed and achieve the goal.

When the burden of killing others becomes too much, he lets himself loose, though he does so in private and American Sniper revels in its individualism. The screen has not seen such a lone, strong and rational military hero in a war picture in decades. Cooper carries the film, but his Kyle is deeply wounded, crippled by an unwinnable war spun by politically correct goons concerned more with appeasing those who worship the Koran than with eradicating the foreign threat to the United States. He is surrounded by those who either cheer the kills or by those who envy him for his ability. Only a few decent men and his fellow SEALs grasp his commitment to a noble cause.

This is why the left hates the picture and why conservatives don’t get it. American Sniper is neither pro nor anti-war and asking which it is misses the point. It is pro-man and pro-American. “It’s about us,” one fighter says about what the effort means, evoking Patton’s famous line about the essence of fighting a war. But, as in Kathryn Bigelow’s The Hurt Locker, these men are like ghosts in an unending war with thousands of dead and waiting-to-be-annihilated Americans – “sitting ducks” as one superior admits, though he does nothing to fix it – in a land where they are ordered to go house by house to pick off terrorist chieftains one by one in a neverending death spiral.

This Chris Kyle comes to grasp, if wordlessly, when he finally, mentally logs out after a climactic battle like the Alamo. In those scenes, with the SEALs outnumbered and surrounded by Islamists and incompetent Americans, the nature of the conflict between the legendary American individualist and the clustering mobs comes into focus. As it does, a dustup envelops everyone and swirls in a deadly, incoherent blur that deposits the audience into the mix. This singular scene is the perfect picture of America’s incompetent post-9/11 response. The enemy is left to be picked off one by one, as hordes gather and storm, while the most skilled marksmen are left literally in the dust at the mercy of machines run by the morally vacant. What happens next punctuates the point leaving American Sniper about what America lets the enemy do to Americans, like what the U.S. let the enemy do to Sony and its major motion picture and will eventually get around to doing to you and me, too.

Early in the movie, a top-notch trainer instructs young Kyle to “master your breath, master your mind and find the space between heartbeats” to master your life. This is the theme of this absorbing tale in tours of the American sniper. See it and judge for yourself. Do not be shocked if you, too, are moved, not just by what an American soldier did and tried to do for you, but by what the American government did and has done to him.