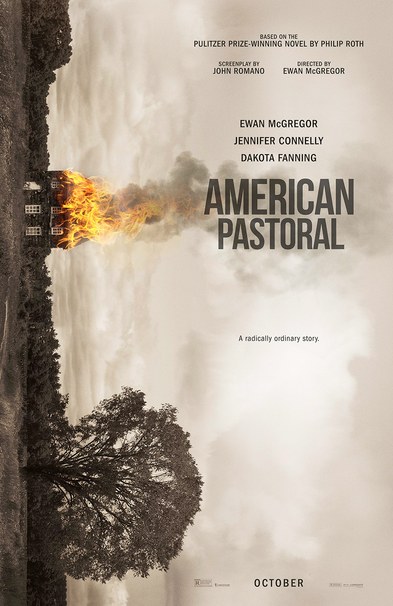 American Pastoral, especially for the young who’ve been indoctrinated to romanticize the hippies, the New Left and the Sixties, is rooted in true stories. This thoughtfully written and directed picture is a singular tale of how it really happened, in essence; the vitriol for everything decent and middle class, the anti-capitalism and the incessant, systematic contamination of the youngest minds. That it’s bottled up in often stilted, poorly directed dialogue can be forgiven of foreign, first-time feature film director Ewan McGregor (Salmon Fishing in the Yemen), who cast himself as the male lead. The tagline, “a radically ordinary story”, prefacing the era depicted in Ang Lee’s Seventies-themed The Ice Storm, takes hold. The poster’s picture of a house on fire in a world turning upside down foretells the darkly humorous, bitter and tragic tale of a young nation’s rapid, horrible and oncoming end.

In present-day narration by a writer (David Straithairn), the downfall of the family living the American Dream begins with Jennifer Connelly as a beauty contestant and winner and Ewan McGregor as the star blue-eyed athlete who meet and marry in Newark and quickly go off to live in the country, as mid-Atlantic types relish calling it, to cash in on post-World War 2 Americanism. He’s the son of a Jewish factory owner with liberal, middle class values. She’s the beautiful, corn-fed Catholic bride.

Or is it? Contrary to this week’s other bleak yet involving new picture, Moonlight, this couple was commonly the consensus of what a pair who had everything—what today’s twisted types deride as “privilege”—were typically like: white, middle class, assimilationist and aspirational. As they walk into their future, their figures are blinded by the sun. Pictorially and thematically, American Pastoral plays like an Ayn Rand novel with only villains and mediocrities, a blend of Charles Dickens, John Irving and Billy Joel’s emblematic song and video, “We Didn’t Start the Fire”. Indeed, when they have their first and only child, Merry, it becomes clear that the postwar darlings have everything but no grasp of its value; whatever Roth’s and screenwriter John Romano’s intentions, their Mr. and Mrs. America are utterly ignorant of themselves, good parenting and a rational philosophy. They are no match for mid-20th century America’s New Left crusade.

So, when pictures of self-immolation face the girl at a formative age, Connelly’s mother only frets about its effect but does nothing to counter the damage. McGregor’s father? He tells the bright, scarred child: “It’s far away”. That’s one of his first lies. Sitting in an ideal home with only a sense of what causes the ideal, the ghosts of self-abnegation are coming for their child. As insidious irrationalism slithers into their country lives, through an analysis of their daughter’s stuttering which should trigger their alarms and doesn’t, out pops Merry the 16-year-old radical leftist (Dakota Fanning, not even close to looking sixteen but perfectly raging and vacant in her best role since The Runaways), spewing hate speech for everything American and middle class like a Manson girl and making Patty Hearst look like a mid-Sixties Barbie doll.

Think this is too much and it didn’t happen this way? Think again. It did. Watch the clips embedded here, sit back and see how the alt right began—as an offshoot of the New Left, itself an amalgamation of the mindless conformity and traditionalism of the Fifties.

“People have lost their minds”, someone says in the wooden style that director McGregor must have mistook for terseness and simplicity. But clues in the script are plain to see, retaining a balance of irony and agony, dismissing political threats and intimidation as “just talk” (sound familiar?) and rhetorically asking about parenting with a straight face: “How can you know what to do?” As Newark erupts in race riots, with the factory that feeds the family in the crosshairs, McGregor’s “capitalist pig” bonds with Uzo Aduba’s black factory manager to unfurl a banner that pleads: “Negroes work here”.

The capitalists get what the New Left insists they’ve got coming a second later, though not before Aduba’s middle class black gives a heartfelt speech to National Guardsmen in a fine, moving scene that resonates today, too.

That an act of “homegrown” terrorism—today’s shorthand for America’s rotting from within—forms the sadly, hilariously wicked basis for the moral of what happens to the bright child whose parents negated her before she negated herself is fitting, if not fully dramatized. McGregor and Romano have a sense of what it must be like for a tortured “Comprachico”, whether he becomes a raging New Left terrorist or a raging militia terrorist or any ordinary anarchist, nihilist or jihadist near you. Despite a stagy quality in certain scenes, the anger and confusion of a century of disowned, monstrous children is in Dakota Fanning’s eyes.

American Pastoral in this naturalism has that to say about what we’ve been through all these years and more. There’s more of Roth’s uniquely bitter mix of social commentary on sex, desire, perversity and how civilized man sanctions the spreading savagery in everyday lives. “She’s sick in her mind,” McGregor’s father pleads as he nears his final destination in a parent’s long, anguished quest to redeem himself and save his lost little monster. In this judgment, he’s pegged the nation we have now. American Pastoral is not as polished and pure as I may be making it sound. But it serves to recall how the sickness began.