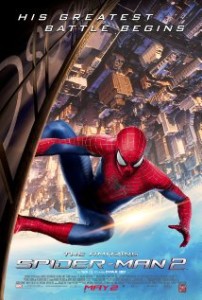 The Amazing Spider-Man 2 is short, far short, of amazing. The 2012 original in Sony’s and Marvel’s rebooted series, The Amazing Spider-Man, was less predictable, more character-driven and more focused. This movie is not terrible, not middling, just lacking in cohesion and feeling unfinished.

Centering upon Peter Parker (Andrew Garfield again) and his girlfriend Gwen Stacy (Emma Stone again), both graduating high school as the oldest high school students since any season of Glee, no less than three villains complicate Spider-Man’s already complicated life, not counting the evil Oscorp and its evil business executives in an unfortunately and implausibly anti-capitalist subplot that bubbles underneath the whole movie and finally pops with the impact of slowly deflating bubblegum pfftt. Easily the most developed and interesting villain is an electrical engineer played by Jamie Foxx, recreating his homeless lunatic from The Soloist, that also fades out without a proper finish. The character isn’t really believable as an engineer but he at least has reasons for becoming Electro.

And, taking back what he created, Electro zaps some life into an otherwise flat, lifeless script that doesn’t know what to do with its sense of humor or story, spreading Peter Parker’s doubt too thin and wasting time with disjointed scenes that result in a wildly fluctuating and self-contradictory movie. The throughline is misanthropy, which is shared by everyone from Parker’s photojournalist, who is never seen working at the Bugle, to a baggy-eyed business heir, gothic secretary and of course poor Maxwell Dillon/Electro (Foxx) who is lonely, invisible and misunderstood. Joined by Sally Field as Aunt May and Campbell Scott in flashback as Parker’s father, they all flit in and out of this kitchen sink sequel with abandon. The boozy Oscorp kid is not for a second plausible as someone who could contemplate what time it is let alone running a big business that powers Manhattan and the only one whose character makes some internally logical sense is a hammer-and-sickle tattooed Soviet type (Paul Giamatti) in what amounts to a cameo as a mad dog Russian bent on mowing every New Yorker down for kicks.

All of this takes place in large, cartoonish action scenes in 3D (I saw the picture in IMAX 3D, which adds nothing) and only the most invested and diehard Steve Ditko, Stan Lee and Marvel fans will want to shell out the cost of parking and movie ticket to see the twists (which most will see coming) and feel satisfied. The rest will leave the theater feeling subjected to a Wagernian exercise in overkill that magnifies everything but what matters to the max. The result reminds movie people that Marvel is capable of losing touch with what made its Captain America: The Winter Soldier a fine film – strong lead character, purposeful story and a meaningful theme – and getting caught in flat tales of misanthropy. The Amazing Spider-Man 2 is at once incomplete, underdeveloped and overblown.