A Dog’s Purpose is a wonderfully rendered fairy tale from Hollywood’s most magical filmmaker. I laughed, I cried, and I thought about “the meaning of life” as the opening line of the movie asks the audience to do. This is such a rare combination in movies—and people, especially show business people, go on about how Hollywood used to make light and intelligent pictures and bemoan that they’re not like that anymore—that this Universal film, made with Amblin, Walden and others and based on a book by W. Bruce Cameron, deserves 100 percent support.

The best pictures often don’t get what they deserve and A Dog’s Purpose, with a target on it from a group opposed to almost any relationship between pets and humans from the start, is one of them, which I know firsthand. In fact, when the smear campaign against the movie was launched, courtesy of a selectively edited video released for distribution through a trashy website, its own stakeholders were effectively shamed into submission, burying heads in the sand, dodging questions and queries for clarification and cancelling the movie’s premiere. Those who spoke out in defense of the movie, including one of each of its writers, actors and producers and the director, Lasse Hallström (The Hundred-Foot Journey, My Life as a Dog, An Unfinished Life, Chocolat, Salmon Fishing in the Yemen), either came off as defensive or as if they were almost apologizing for the movie in advance. Josh Gad (TV’s The Comedians and Frozen), who does the voice of the dogs, took the bait and denounced purported footage in a controversial video rather than back the movie. Almost no one—not Universal, Amblin or Walden, or Mr. Hallström—opted to condemn the smear campaign, which sanctioned the flawed premise of the attack (that a picture, or pictures that are edited and arranged, is an argument) and passively legitimized a disturbing and potentially dangerous trend against the exercise of free speech (postscript: the animal rights group’s claims were false and unfounded, an independent investigation found; read more info here and read my exclusive interview with Lasse Hallström, the smeared movie’s director, here; this is his only interview about the film).

Going to see a movie in a movie theater should not require an act of bravery.

This time, I bought my own ticket on principle. I was joined by another guest when he found out I was going to see A Dog’s Purpose and I was asked again by two friends if they could come, too. The audience at Hollywood’s ArcLight Cinemas was lively and diverse. They were mostly families with young children, single men and single women, seated separately and alone, and couples or groups of friends like us. 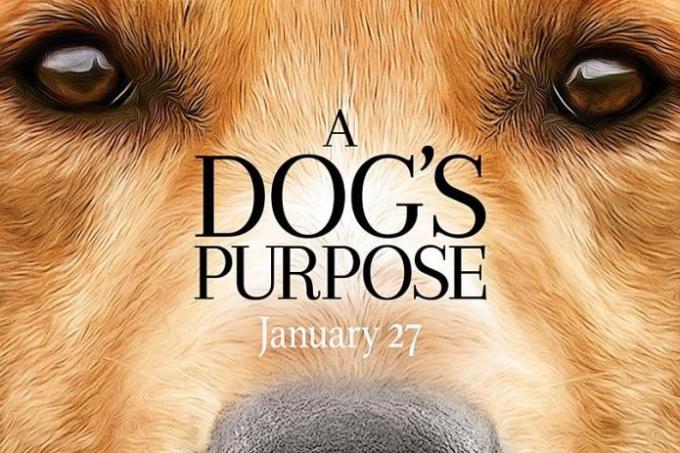 Like most of his movies, which are some of the most life-affirming movies ever made, director Lasse Hallström’s A Dog’s Purpose plays to everyone capable of kindness, love and rationality. With a sharp and searching narration, as in An Unfinished Life and his seminal adaptation of John Irving’s novel, The Cider House Rules, intersecting plot lines and multiple characters converge into one poignant point about the whole of one’s life. The action starts, however, with themes of ownership, tagging and naming and what a dog uniquely means to a boy. The particular boy (Bryce Gheisar) to whom this dog first belongs reads comics and books about characters such as Captain America and Tom Sawyer and he grows into a fine teen-ager (K.J. Apa, TV’s Riverdale).

The wholesome, unspoiled quality of the boy’s character adds to the film’s conflict and grounds the movie’s other characters and subplots, building on subtle and gently delivered themes about dog people as peculiar, sad and lonely, and out of step with others, introverted and perhaps deferential to others, too. It’s a keen insight which is easily overlooked amid the dog tales, pathos and humor.

But it’s this type of skillfully woven idea that stirs one’s thoughts and moves one’s emotions in A Dog’s Purpose. So many of these tender truths dot the trail with wisdom, warmth and depth, such as a girl (Britt Robertson, Dan in Real Life, Tomorrowland) winning a prize for herself at a shooting gallery, a hardworking Midwestern father who slowly yet understandably lets himself go or a kid who’s jealous of the star quarterback. Then, there are the short but intelligent, clever or hilarious takes on the rivalry with cats, the sights and aromas of farms, or the irony of overindulging in hot dogs. That’s not to include how a dog’s hard work liberates a stoic policeman. Or that a dog’s companionship aligns in love and life with a college student. Along the multiple incarnations of a dog’s life, imaginatively depicted as foraging for a dog’s purpose, cultural points pop up—a Dynasty smackdown in the 1980s, guns in the 1970s, folk music in the 1960s—and A Dog’s Purpose comes in stunning pictures of a morning fog at the farm, a depressed home with an impoverished dog chained to a post, a happy dog bounding through the field to greet his master. It’s as sentimental as life and I suppose that if A Dog’s Purpose comes off as overly sentimental—a common complaint about Lasse Hallström’s movies—it’s in direct proportion to one’s own cynicism, as usual. This movie earns a treasure in every scene even when you see the scene coming.

With a cast including The Mod Squad‘s Peggy Lipton and Truth‘s Dennis Quaid in his finest performance since Far From Heaven—and a nice companion role to his quarterback Mike in Breaking Away—A Dog’s Purpose leaps from the screen with wonder, twists and an unequivocal answer to the meaning of life. In what may be his best movie since Chocolat, Lasse Hallström’s A Dog’s Purpose routes life’s loneliness into the chilling, wrenching and marvelous experience of owning and having a dog and with the reward you would almost certainly come to expect.

Exclusive: Interview with Lasse Hallström on A Dog’s Purpose