At the beginning of 1917, the World War One movie by writer and director Sam Mendes (American Beauty), one British soldier is covered. One is not. This type of visual sets up 1917′s many stylized pictures that signal plot points to come. Most of 1917 is similarly structured, relatively predictable and visually, not conceptually, driven. 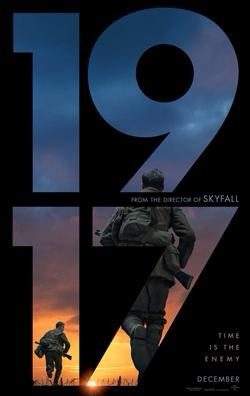 Indeed, there’s no historical context. The audience barely learns that the Germans are at war with the British, let alone that what was called the Great War irrevocably altered history, including the arts, as Ayn Rand observed in The Romantic Manifesto (1969). It is somehow fitting that this sensory-oriented, perpetually-driven film, co-written by Krysty Wilson-Cairns, only strives to immerse the audience in a selective depiction of war.

It’s a whole, not halfway, immersion. The British soldier characters played by George MacKay and Dean-Charles Chapman accept an assignment to save 1,600 Brits from enemy entrapment starting with a charge down the Western front’s winding trenches. The best line in the thrilling 1917, “we should think about this”, is the movie’s only effort to make the audience think about war; the rest of 1917 is more of a horror movie than an epic war movie.

Perhaps this is as it should be, though even the most horrifying great war films, such as Sergeant York (1941) and Saving Private Ryan (1998), both of which 1917 draws heavily from, go to tremendous efforts to dramatize and contextualize in detail war and the men who fought it. With Thomas Newman’s (Thank You for Your Service, Little Children, Bridge of Spies) electronic musical score, cinematography by Roger Deakins (The Goldfinch, 1984, Blade Runner 2049) and silhouettes, light and scenes of men running, Mendes fills 1917 with multitudes of arresting sounds and pictures to hold interest.

The cast, too, including Richard Madden (Rocketman), Colin Firth (The King’s Speech), Mark Strong (Robin Hood) and Benedict Cumberbatch (War Horse), deliver fine performances, particularly MacKay in the lead as the knowing soldier in search of an elusive and faraway band of British soldiers.

Yet the upshot is that 1917 lacks emotional, if not visceral, power. Surely, there are symbolic moments, such as a running soldier against the charge of his comrades, desperately trying to halt the push in an impossible task. This is the perfect metaphor for the Great War, which one of America’s worst presidents, Woodrow Wilson, championed, sending countless Americans to be sacrificed.

That the audience never learns the cause of war, this war’s or any war’s, and sees only some of the carefully selected effects for the sake of horror, goes to 1917′s anti-war message. Such a message may emerge in any honest war movie. In 1917, a historic year for at least a few major reasons, gripping human peril, spectacular images and ominous music mask what at root is a cliched and oddly hollow message that war is bad.