The spirit of youth propels Wings (1927), Oscar’s first Best Picture, directed by William Wellman. Youth as idealism permeates the epic silent movie from the start, in eloquently worded titles, a beautiful cast and awe-inspiring action. I finally caught part of Wings several years ago on TCM. I was spellbound by the seriousness, gripping drama and earnest performances. I saw it again last night at a courthouse in Pasadena (see my afternotes). Hearing the audience gasp, sniffle, laugh, weep and go silent drove its impact home. Wings is both box office smash and magnificent motion picture.

The first thing to notice about this 90 year-old film is the leads in fresh and expressive faces that capture the pre-World War 1 state of the nation. It was a man’s world, with women recently made eligible to vote, though their emerging status as liberated equals plays to the picture’s strength. Still, pre-feminist scenes of men are remarkable. Wings is a window to what once was true, in easy glances and sustained, naturally confident enthusiasm for life—as against today’s submission to waiting for permission to pass and impressing or catering to others, especially in deference to women—and for life’s thrills, from fast cars, efficacy and love of country to the prospect of piloting an airplane. These were, in Wings‘ titles and words, “paths of glory”. 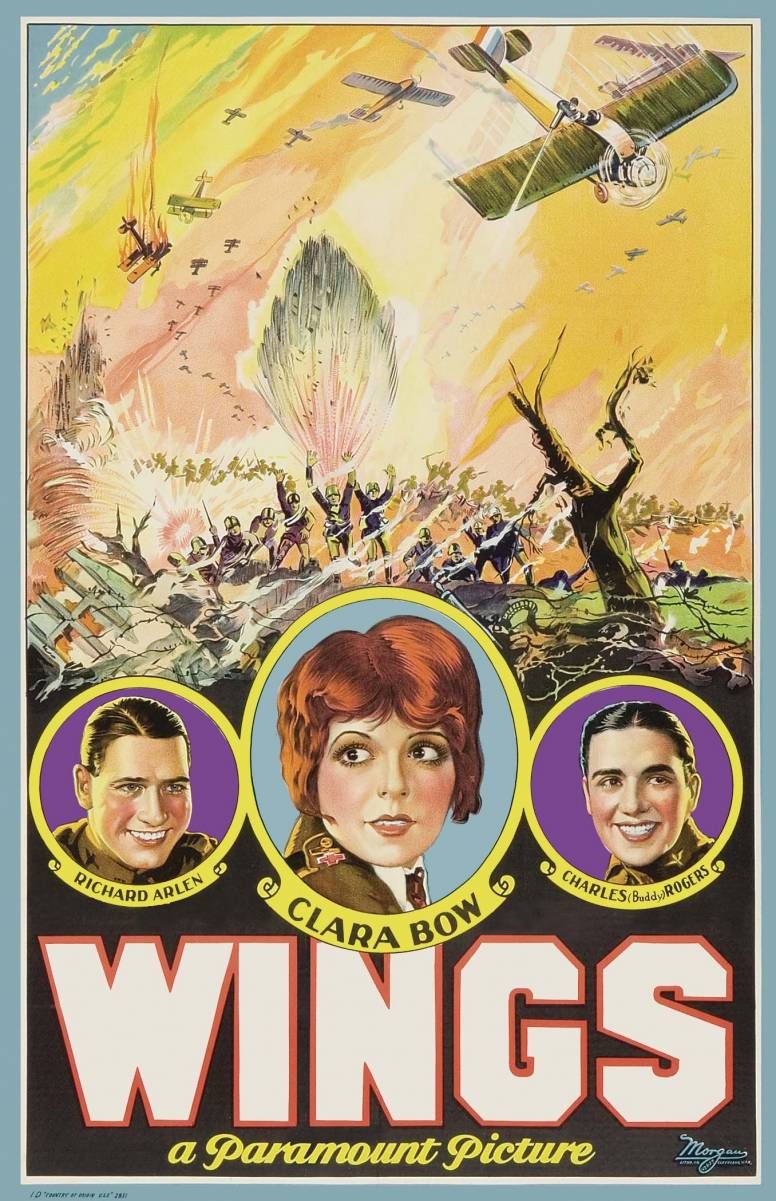 Poetic writing dramatizes two early 20th century American men as they go to war in Europe. They bid goodbye to fathers and mothers and dogs in extended scenes teasing what it means to go to war, a sense we’ve lost as a nation, which may explain why we’ve been engaged in the longest and most unsuccessful war in U.S. history.

Wings shows what’s worth fighting for.

Man is depicted in youth—in three lives, one woman (Clara Bow, Mantrap) and two men (Charles Rogers, Varsity, and Richard Arlen, 1934’s The Virginian)—battle and love. So Wings‘ foremost quality is reverence for the life of a single man. You notice how it was once considered natural, even decent, to admire man.

You also notice that the wealthy are depicted as human, too, which is a rare quality in movies. One of the leading males, Arlen’s character, David, who becomes known to the one who loves him most as Dave, has a chiseled, aristocratic beauty; he sits with an air of benevolent ease when he’s with Sylvia (Jobyna Ralston), his girlfriend, on a swing. He barely blinks when another man, Jack (Rogers), arrives to steal Sylvia away. David’s wealth lies in his grace and confidence, a refined kind of lust for life that gains higher meaning in his military training as an aviator in war. Director Wellman (A Star is Born, Night Nurse, Beau Geste, The High and the Mighty, The Ox-Bow Incident), an ace pilot during World War 1 himself, lavishes David with unending lightness and nonchalance.

David leaves his worldwise mother, whose face carries a lifetime of knowledge, and wheelchair-bound father, whose eyes foresee what may come, and goes to train for his first flight. As he does, carefree Jack, who is only interested in working on his car, wooing the uptown Sylvia and taking part in the war against the Heines, as the enemy Germans are known, is oblivious to the affections of Mary (Bow) from around the bend. Bow’s characterization of Mary is really exceptional, embodying the best of a newly liberated woman, both undaunted and feminine yet somehow an atypical female. Soon, the soldiers see that Mary measures up in terms of fearlessness.

Jack and David bond amid pilot training, sealing the connection over a short but powerful encounter with a lanky pilot named White (Gary Cooper in his first credited role). They crawl, steer, hop, dodge, fire weapons and endure bad news before facing any Germans, portrayed here as marching with pageantry and flying with superiority. Then comes the first dogfight. The planes go down. Daredevil aerial photography shows the dueling biplanes skirting and chasing like wiggling tadpoles in the sky. When bombs start falling and bullets start piercing, vengeance, heartbreak and, thanks to a Dutchman who’s proud to be American, humor abound. Ribbons of black smoke trail in the air, planes pull suddenly up and up and up. Bubbles rise in a Paris nightclub. Always, action on screen suggests the whir of an airplane as Wings comes to a shocking climax in the skies above a French countryside. In daring camera work, Wellman depicts death as a searing and tender farewell—in unforgettable intimacy—as an intelligent and watchful woman and her child bear witness to the private horror and valor of war.

This leaves undone only the final accounting, etched by the retracing of a shooting star, and the vow to focus on the moment “from now on”. Wings, too long in battle scenes and showing that war makes life harder to cleanse, heal and sort through, depicts the sacred, and residual, oath to retain one’s innocence after almost everything of value has been destroyed.

Wings is not a pacifist movie. There is glory for those who fight to fly and fly to defend. But there is the hollowness that follows, which men now rightly call trauma, having loved and lost while soaring toward the stars. The soulful Wings is moviemaking at its most personal, powerful and best.

At the Pasadena courthouse screening hosted by Judge Alex Kozinski, the director’s son, William Wellman, Jr., Randy Haberkamp, the motion picture academy’s director of preservation, and Andrea Kalas, who is Paramount Pictures’ head of archives, spoke with the audience before and after the movie. One of the reasons I like attending Judge Kozinski’s “favorite flicks” (besides the pizza, prizes and guests) is that he, too, takes movies seriously, thinks for himself and brings people together based on a shared interest in examining film in rational discourse.

Last night’s event was no exception, with a discussion of Wings after the movie—before the Blu-Ray edition’s restoration came on, he spoke with his trademark humor about pre-Hays Code scenes of lesbians, naked breasts and what he referred to as the “man kiss”—about the Paramount movie’s $1.2 million budget, which was a lot of money in 1927. Artillery, tanks, troops, trucks and explosives were brought in from Fort Sam Houston to recreate World War 1. Wellman, whose son said he thinks his father was chiefly moved to make Wings by his wartime experiences as a pilot, specifically the loss of most of his friends and comrades in battle, used real bombs in the pictures of bombs being dropped on the town in France, which was actually a set built in San Antonio, Texas. When asked why his father was shunned in Hollywood, Wellman, Jr. said that he thought his dad was probably “insolent” and added that he was also probably less insolent “if they left him alone.” He pointed out that his father had lived through a real life equivalent like the picture’s Gary Cooper story arc. Wings is tremendously influential, from Star Wars to Top Gun, according to Wellman who said that the 80s’ film’s director, the late Tony Scott, once told Wellman that he’d watched Wings “many times” in preparation for making Top Gun. The silent film’s live accompaniment by musician Michael Mortilla was outstanding.

Wings was originally released with sequences presented in Magnascope, a lens which enlarged the 35mm image to an expanded screen.